(Minghui.org) Today's news from China includes incidents of persecution that took place in 10 cities or counties in 7 provinces, where at least 26 practitioners were recently persecuted for their belief. 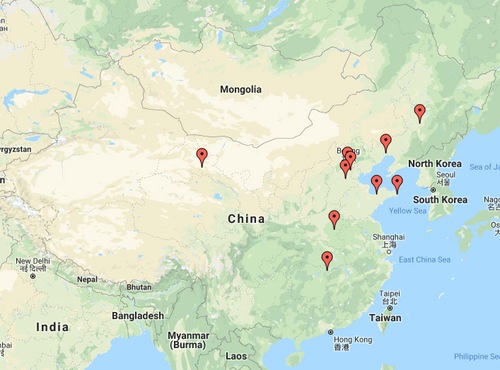 Ms. Zhang Kunxiu was arrested by officers from the Nanyuan Police Station in the Fengtai District for distributing informational materials about Falun Gong on the evening of November 27, 2018. Five plainclothes officers broke into her home early the next morning and ransacked it. They confiscated photos of the founder of Falun Gong, Falun Dafa books, a cell phone, computer, and printed materials.

Ms. Zhang was taken to the Fengtai Detention Center on November 28. She was released on bail 15 days later.

Ms. Ge, in her 50s, was reported to the police for talking to people about Falun Gong around August 23, 2019. She was arrested by officers from the 110 Response Unit, the Nanshan Police Station, and the Taihe District Domestic Security Division. Her home was ransacked, and Falun Dafa books and materials were confiscated.

The police told Ms. Ge’s family that she would be detained for ten days.

The officers also arrested Ms. Zhao Qiaomei, who lives in the Yongji Group Residential Community, Huabei Oilfield, the following day. They confiscated a notebook computer and other personal belongings. Ms. Zhao was released on bail later that day.

Ms. Liu Yanhua was arrested on April 17, 2019, and her home was ransacked. She is being detained.

Ms. Luan Yuemei was arrested at home by officer Li Tao and others from the Hehualu Police Department, Shanan Neighborhood, on the afternoon of August 12, 2019. Her home was ransacked. She was taken to a detention center for ten days.

Mr. Pan Tiancheng, around 60 years old, from Shuinan Village, Guoxi Town, was seen on surveillance cameras posting Falun Gong materials around August 20, 2019. He was arrested, and his whereabouts are unknown.

Ms. Liu Aihua and Ms. Zhou Hao from the Shidao Management Area were arrested on August 24, 2019, for talking to people about Falun Gong in Wendeng District, Weihai City.

Mr. Wu Zhimin was arrested on July 19, 2017 and later sentenced to a two-and-a-half-year prison term.

Ms. Wang Huiyuan, in her 50s, and Ms. Wang Yunxia were arrested on August 30, 2017. They were later sentenced to seven years and four years in prison, respectively.

Mr. Wang Xinqing was arrested at home by officers Zhang Ding’er and Yang Weiming, and others on June 12, 2019. His home was ransacked. He is being held in the Tongcheng County Detention Center.

Ms. Liu Lixia, in her 50s, was arrested by two plainclothes officers from the Xiongguan District Domestic Security Division in 2015. She was held for 15 days before being released on bail.

Ms. Liu was forced to leave home as her retirement salary was suspended and her source of income was cut off.

The last time a practitioner saw her was on October 18, 2017. She has not been heard from since.