Australia: Practitioners in Queensland Share How They Improved While Responsibly Performing Their Duties

August 30, 2019 |   By a Minghui correspondent in Queensland, Australia

(Minghui.org) Falun Gong practitioners in Queensland gathered in Brisbane’s Sunnybank Hall on August 25, 2019, to exchange their experiences. Nine practitioners spoke during the conference about how they have constantly looked within to improve themselves so that they could save people more effectively. 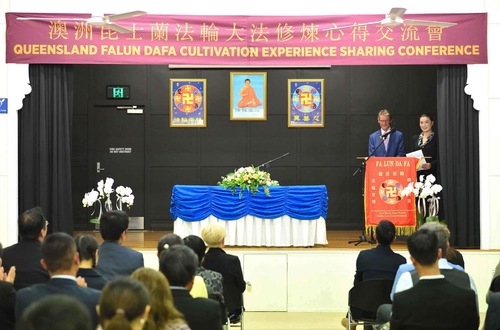 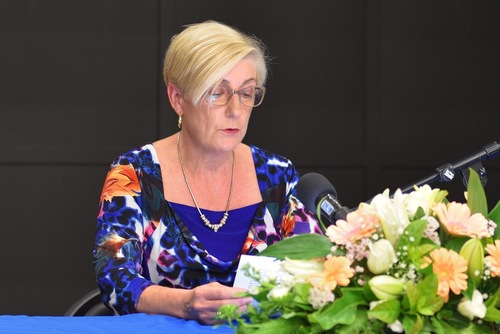 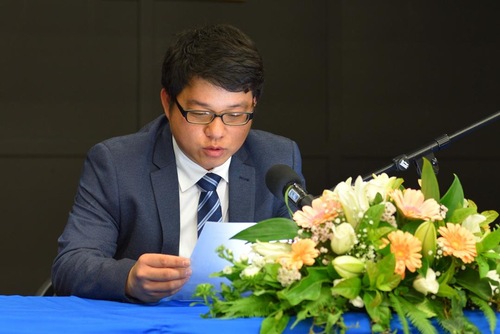 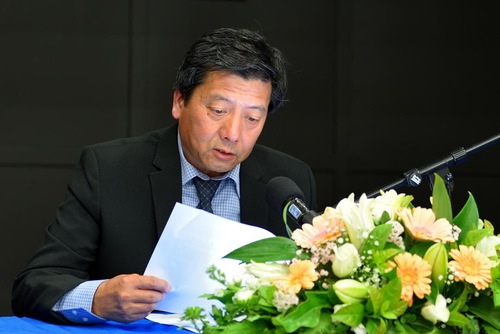 Falun Gong practitioners speak on stage to share stories from their practice.

Louise Morrison from the Gold Coast shared how she had overcome financial issues to attend the New York Fa Conference last May. While in New York City, she saw her attachment to comfort. She compared herself to other practitioners and realized that she needed to truly improve.

After she returned to Australia, she found several other attachments that had been deeply rooted in her heart for a long time. After she eliminated those attachments, she found a job at a university hospital. She understood that it was predestined for her to save people there, and she was proud to be endowed with such a responsibility.

Fulfilling Vows While Working for the Media

Lisa Lei became a salesperson for The Epoch Times newspaper this year. She had been inspired to join the sales team after reading the newspaper's classified ad section. She was deeply impressed with how the practitioners clarified the truth through the media.

“I knew nothing about selling ads. I was older, my English wasn’t good and I didn’t drive,” she said. However, she really wanted to save people by helping with the newspaper. In the process of selling ads, she found that she still harbored some fear and other attachments that had been deeply hidden. When she improved herself according to the Fa, she often had unexpected pleasant surprises.

She once ran into all kinds of problems with a client. No matter what happened, she clearly knew that she had to awaken this person, because all beings are waiting to be saved. She calmed down and adjusted her thoughts based on the Fa before she met with her client each time. Her client was moved by her efforts and persistence, and eventually subscribed to a full-page ad.

William Luo coordinated the efforts to host local performances of Shen Yun Performing Arts. “To meet Master Li’s expectations, I had to coordinate well with the practitioners in Queensland, to cultivate well and to be highly responsible,” he said.

He had been contemplating changing the way they promoted the show, but was afraid that it would fail and that tickets wouldn’t sell. He didn't want to take the risk and be blamed by other practitioners, so he never stepped up to take on real responsibility. He had lived with this guilt for a long time. He later fell into a dilemma and realized the importance of changing their methods for promoting the show. It was about how many people could be saved and whether he could meet Master Li’s expectations and awaken beings in mainstream society. He shared his understanding with other practitioners and gradually won everyone’s trust.

After he eliminated his attachments and notions, their Shen Yun ticket sales last year went up and were better than ever. “The process of selling the tickets was a process of me validating the Fa. As long as I studied the teachings well and continued to assimilate to the Fa and meet its requirements, I could better assist Master Li and save more beings.”

Hank Chen interviewed for three jobs with companies run by Chinese owners. Throughout the process, he tried to eliminate his attachments and clarify the truth with a pure mind. When he interviewed with the second company, he knew that the owner was satisfied with his performance. He then hesitated about whether he should let him know that he was a Falun Gong practitioner, because it might sabotage his opportunity. He eventually clarified the truth to the owner, “It might be the last time I see him, so I had to seize the chance to awaken him.”

He later learned that he wasn’t hired because of his status as a Falun Gong practitioner. He didn’t regret it. Instead he looked within and knew that he didn’t have enough compassion as he clarified the truth and had just rushed through it.

When Hank interviewed with the third company, he adjusted his approach and told the owner that he was a Falun Gong practitioner at the beginning of the interview. A few days later he was hired.

“Only when we walk the path arranged by Master will we be worthy of the title of a ‘Falun Dafa practitioner during the Fa-rectification,’” he said.

Lessons Learned While Working and Traveling in Australia

Chen Yizhang from Taiwan has been working in Australia. He slowed down in his cultivation, because he had a heavy workload and other chores. One day his feet swelled up and hurt terribly. He was unable to stand up properly. He looked within and found his attachments to comfort and monetary gain. As he refocused his efforts on studying the Fa and sending righteous thoughts, his pain gradually went away. After four days, he was able to start working again.