(Minghui.org) Today's news from China includes incidents of persecution that took place in 12 cities or counties in 7 provinces, where at least 23 practitioners were recently persecuted for their belief. 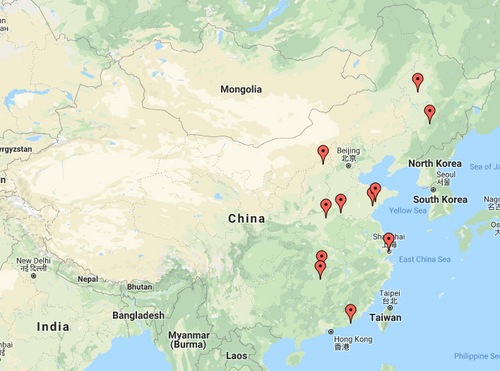 Ms. Tian Zuoshu developed illness symptoms at a detention center on July 31, 2019. When she was taken to the No. 465 Hospital for a physical examination, her blood pressure reading was as high as 210. The local police station notified her family to take her home.

Mr. Xu Zhongyou was arrested at home by a group of plainclothes officers from the Beishan Police Station on July 18, 2019. He was handcuffed. Ms. Liu and her daughter were arrested at Mr. Xu’s home the following day by officers who were staked out there when they came to study the Falun Gong teachings. The officers ransacked the home and confiscated a notebook computer, a printer, cell phones, 8,000 yuan in cash, Falun Dafa books, and 21,000 yuan in paper currency which was printed with information about Falun Gong. At the same time, the officers also arrested Mr. Xu’s wife Ms. Niu Ruanling.

Five days later, Mr. Xu was transferred from the lockup center to a detention center. He developed illness symptoms on August 7 at the detention center, and he was taken to the No. 465 Hospital. His condition has not turned for the better. He was released and brought home by his family after they paid 5,000 yuan.

Officers from the Zhucheng City Police Department, the Domestic Security Division, and the Linjiacun Town Police Station, led by Meng Guangqun, a residential community police officer, broke into Mr. Dong Guigang’s home in Zhaojia Village and ransacked the residence on the afternoon of August 7, 2019. They confiscated a printer, a computer, and Falun Dafa books. Mr. Dong, his wife, and a relative, who was visiting them, were arrested and taken to the police station.

Mr. Liu Diting from Dongxiaozhanggezhuang was arrested by more than twelve officers from the Zhugou Police Station. The officers handcuffed Mr. Liu and confiscated two cell phones. His daughter Ms. Liu Xiaohong was also arrested. She was released after being extorted of 1,480 yuan. Mr. Liu was released from the Gaomi City Detention Center on August 5, 2019.

Ms. Yan Zhaoyun from Hexizhanggezhuang was arrested by the officers, who confiscated her cell phone and her daughter’s computer.

Officers led by Wu Fuhai, director of the Zuoying Township Police Station, broke into Ms. Tao Fenglan’s home in Chenliang Village and ransacked the place in early July 2019. They confiscated Falun Gong informational materials and 2,000 yuan in cash. Ms. Tao was taken to a detention center. Her family paid a 20,000 yuan fine. She was released 15 days later.

Mr. Liu Yuhong was sentenced to a four-year prison term. He was brutally beaten, resulting in one broken rib and one missing tooth.

Mr. Li Rongfeng from Gaomei Village, Liangying Town, Chaonan District, was arrested on July 8, 2019. He is being held in the Chaoyang District Detention Center.

Ms. Yan Jie was arrested by several officers from the Tongbailu No. 2 Police Department on the morning of August 7, 2019. She is being held in the police department. The police ransacked her home and confiscated all of her Falun Dafa books.

Mr. Jin Zuli, Ms. Xiao Zhiqun, Ms. Zhao Yumei, Mr. Peng Xiaoping, and Ms. Zheng Xiyun, from Xiangyin County, were tracked down and followed by the police via their cell phone signals when they were distributing Falun Gong materials. They were arrested and taken to the Xiangyin County Criminal Police Division by officers from the Xinquan Police Station. They had been deprived of food and sleep for 24 hours, and were interrogated for the source of their Falun Gong materials.

Ms. Hao Ruwen was arrested by officers from the Longnan Police Department on June 17, 2019 for using paper bills with Falun Gong facts printed on them. The police ransacked her home and confiscated a computer, Falun Dafa books, and a cell phone. She is being held in the Daqing Detention Center.