Vietnam: Air Force Martial Arts Coach Says Falun Gong Saved His Life, Stands Up to Authorities' Pressure to Give It Up

(Minghui.org) Mr. Quynh Xuyen Nguyen started practicing martial arts when he was a child. After years of arduous training, Quynh Xuyen became a martial arts coach in the Vietnam Air and Air Defense Forces Academy at age 22. His career achievements include awards from multiple national and international tournaments. His students have won five gold and six silver medals at various competitions.

Quynh Xuyen enjoyed repeated success by working hard, but a serious disease completely changed his life. In 2015 when he was 51, he was diagnosed with mitral insufficiency, which caused high blood pressure. He couldn't believe it because according to air force physicians, he enjoyed great health. He was disqualified from participating in competitions and was admitted to a hospital. A series of treatments had no effect. He felt weak and short of breath, and he often experienced chest pains. His doctor said he needed surgery to repair a heart valve, but his lower body might become paralyzed.

Quynh Xuyen was frustrated and felt he had no future. He realized all the honors and victories were meaningless without good health.

Blessed in His Later Years

Quynh Xuyen's wife, an elementary school teacher, learned Falun Gong in the summer of 2015. She used to have arthritis, stomach disease, high blood pressure and vestibular dysfunction. However, the symptoms that had bothered her for years disappeared soon after she started practicing and even before she finished reading the book Zhuan Falun. When his wife told him about Falun Gong, Quynh Xuyen was dubious. His wife encouraged him and said, “Many people have experienced marvelous changes after reading this book. It can improve your health too.” 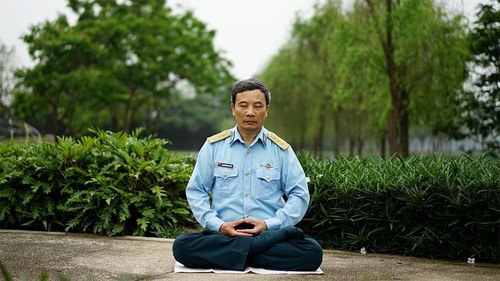 Quynh Xuyen started by learning the exercises. Within a week, he experienced amazing changes. “I used to breathe heavily and was tired, but within one week after I started practicing Falun Gong, I felt light while walking or climbing stairs. My chest pain went away. My breathing became normal and I felt so relaxed!”

He used to be addicted to drinking for more than 30 years, but surprisingly, alcohol started to taste bad after he started to practice. Amazed, Quynh Xuyen went online to find out more about Falun Gong. He found many Falun Gong practitioners' experience sharing articles and news about the persecution by the Chinese communist regime. Shaken by the information, he kept asking himself, “How could such a great practice be persecuted?”

“When I read the story about a practitioner in Beijing involved in a car accident in the book, I thought, 'how could it be possible?' Soon afterwards, my eye was hit hard by a tennis ball. Everyone urged me to go see a doctor. I remembered Master's teaching. and said, 'I'm fine.' Even though my eye was swollen and black, I continued to read the Fa. My eyesight became better and better. The words looked sharper and sharper. After I woke up the next morning, I looked into the mirror and found that my eye was completely normal as though nothing had happened.”

Quynh Xuyen's personal experience ended his doubt. He realized that he was fortunate to have found Falun Gong. It gave him health and confidence, and above all, he found the meaning of life.

To introduce Falun Gong to more people, Quynh Xuyen hosted nine-day workshops in his own home. “It started with a handful of people, and grew to more than 30 people per session with 50 at its peak.” He played the videos of Master's lectures and showed people how to do the exercises. The profound meaning of Falun Gong principles in simple language shook the hearts of many people and continued to bring new understandings to Quynh Xuyen. 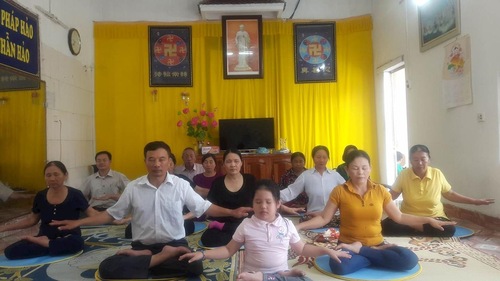 Quynh Xuyen does Falun Gong exercises with other practitioners.

Recounting his changes, Quynh Xuyen said, “I worked hard and thought I was a good person. However, after practicing Falun Gong, I require myself to follow Truthfulness-Compassion-Forbearance in every little thing in life. To give an example, it's a common practice in Vietnam to give red envelopes with money to those who help you find a job. I used to think this was reasonable, but self-cultivation has given me higher standard. One time, my student gave me a red envelope and asked me to help him find a job. It was 15 million Vietnamese Dong (equivalent to 650 U.S. dollars). Upon recalling Master's teachings, I returned the envelope to the student and told him that the teachings of Falun Gong taught me to help others unconditionally and I would certainly help him, but wouldn't expect him to pay. The student and his parents were surprised. They praised Falun Gong as righteous and started practicing Falun Gong themselves.

Creating a Self-Cultivation Climate in the Air Force

Quynh Xuyen knew that he had done nothing wrong. He calmly clarified the facts to the administrator. “I told him Falun Gong was a great cultivation system of the Buddha School following Truthfulness-Compassion-Forbearance. It had won more than 3,600 awards and recognitions around the world, and the CCP's lies had been exposed in the international community.”

Waves of pressure continued to pour on Quynh Xuyen. He received a formal document from the upper administration, requiring him to stop practicing Falun Gong immediately. Quynh Xuyen refused to be deterred. Quynh Xuyen told his administrator, “There is nothing wrong with my practice. It's not against the law. This book teaches people Truthfulness-Compassion-Forbearance.” He gave the administrator a copy of Zhuan Falun to read.

Quynh Xuyen said, “I was very calm. I knew that Master had given me a great opportunity to clarify facts.” He contacted each member of the upper administration. With compassion and righteous thoughts, he talked with them about Falun Gong.

“I found it easier and easier as I approached the upper level. A Colonel agreed to see me eventually. He listened to me quietly and was understanding. Many officers said, 'He is close to retirement age. Let him practice if he wants to. Don't stop him.'” Ever since then, Quynh Xuyen has been openly practicing Falun Gong in the air force. By the time he retired in 2018, he had been promoted to the rank of Colonel.

Before he began practicing, Quynh Xuyen used to seize every second in life to achieve more, but didn't stop to ask himself where he was heading. Now he is certain he's walking on a path leading to the brightest future. He said, “I thank Master for his compassionate salvation and giving me wisdom and righteous thoughts during the Fa rectification. I hope more people will be able to learn the truth of Falun Gong from my experience and have a bright future!”