(Minghui.org) Today's news from China includes incidents of persecution that took place in 15 cities or counties in 10 provinces，where at least 30 practitioners were recently persecuted for their belief. 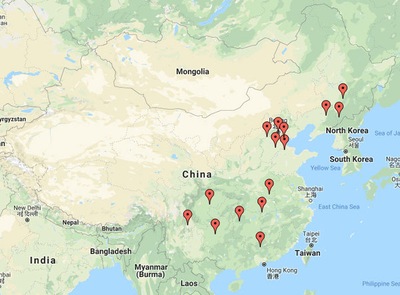 Ms. Cao Minghui, in her 80s, from the Gaojiayuan Residential Community, was arrested by officers from the Jiuxianqiao Police Station in the Chaoyang District on July 26, 2019.

Officers from the Changchunlu Police Station broke into Ms. Tian Zuoshu’s home and arrested her and her son Zhang Wenxian (who does not practice Falun Gong) on July 19, 2019. Ms. Zhang Xiufeng (also called Dalan) and her teenage son Dong Xuanchen, who live in the same building as Ms. Tian, were also arrested. The officers confiscated two computers, a printer, Falun Dafa books, and other personal belongings.

The practitioners’ sons were released later that day. Ms. Tian and Ms. Zhang were held in a lockup center for five days, before being transferred to the Jilin City Detention Center.

Participant in the persecution of these practitioners:Changchunlu Police Station: +86-432-64882372

Ms. Tang Lijuan from Kuaidamao Town was arrested by plainclothes officers on the afternoon of July 16, 2019. She was taken to the Kuaidamao Police Station.

Ms. Zhang Youfen has not been home for over ten days, and may also have been arrested. Several other practitioners’ homes were ransacked.

Party secretary of the Chenglong Residential Community Deng Huan, director of the Zhixi Police Station Jiang Xiongfei, and others broke into 82-year-old Ms. Liu Suqing’s home and ransacked it on July 5, 2019. They confiscated Falun Dafa books and informational materials.

Officers from the Ninghe Town Police Station in the Ninghe District broke into Ms. Zhu Qiuzhen’s home, ransacked it and arrested her on July 9, 2019. She was placed under criminal detention.

Participant in the persecution of these practitioners:Ninghe Police Station: +86-22-69419165

Mr. Du Quancun, in his 70s, was arrested in 2018. He is still being held in the Qingyun County Detention Center. His legs are weak and he has a hard time getting around. He family has not been allowed to visit him.

Mr. Cai Qing, 37, from the Wujian District, was arrested by officers from Nanning City and Guangdong Province Domestic Security in the Xingning District, Guangxi Autonomous Region on the morning of July 30, 2019. Mr. Cai’s rental home was ransacked and barricaded. The officers confiscated a laptop worth over 10,000 yuan, a printer, and Falun Dafa books. Mr. Cai’s whereabouts are unknown.

Ms. Cao Fuzhi was arrested by officers from the Tayayi Police Station on the morning of August 1, 2019. She was taken to a detention center for ten days.

Ms. Han Ling was arrested on July 14, 2019, for posting Falun Gong informational materials at the county government gate. She is being held in the Hengshui City Detention Center, and has not been allowed family visits.

Ms. Zhu Xueying was arrested by the Chibi City police on June 26, 2019, for talking to people about Falun Gong. She was held in a lockup center for 14 days, before being transferred to a detention center. Her pension has been withheld.

Ms. Wu was taken to the Shuanglong Police Department later that day. She was then handcuffed and transferred to the Nanming District Detention Center for 17 days.

Ms. Jia Naizhi’s lawyer went to visit her in the Nangou Detention Center on the morning of July 31, 2019, but wasn’t able to meet her. Due to being persecuted in the detention center, Ms. Jia could not stand up.

Ms. Jia and Ms. Zhao Yulan, 79, were arrested by police officers on the evening of April 18, 2019. Their homes were ransacked. Both practitioners were taken to the Xinfu Police Station, where they were interrogated separately. They were taken to the Nangou Detention Center the following evening. Ms. Zhao was released nine days later, while Ms. Jia was officially placed under arrest.

Ms. Peng Guoqing, 67, Ms. Zhang Guanfeng, and Ms. Deng Juying were arrested on July 16, 2019, for distributing Falun Gong materials. Ms. Zhang and Ms. Deng were released later that day, as they were over 70 years old. Ms. Peng is being held in the Huaihua City No. 4 Detention Center.