Germany Condemns 20 Years of Persecution of Falun Gong in China

(Minghui.org) It has been 20 years since the onset of the persecution of practitioners of Falun Gong in China, a mind and body improvement practice taught in China since 1992, during which practitioners have suffered indescribable torture. Germany has spoken up in support of Falun Gong.

Dr. Baerbel Kofler, a federal Commissioner for Human Rights Policy and Humanitarian Aid, posted a news release on the German Federal Foreign Office website, in which she condemned Beijing for its persecution of Falun Gong. 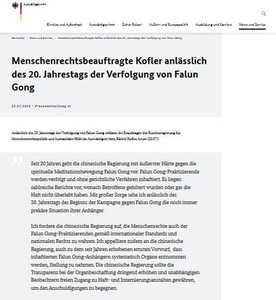 The news release states: “During the past 20 years the Chinese communist regime viciously treated practitioners of the spiritual cultivation practice Falun Gong. Falun Gong practitioners are persecuted and detained without legal process. Many reports have shown that practitioners are tortured and even died during detention. At the 20th anniversary of the persecution I am deeply concerned that the practitioners in China are still in danger.”

She asks Beijing to respond to “the serious accusations of its years of systemic organ harvesting from detained Falun Gong practitioners,” and “immediately increase the transparency of its sources of organs for transplants, as well as allow free entrance by independent observers to its detention facilities.”