(Minghui.org) Falun Dafa practitioners gathered on the Ohio State University (OSU) campus in Columbus on graduation day, May 5, 2019, to raise awareness about the meditation practice and its persecution by the communist regime in China.

On their way to and from the ceremony, many of the graduates, along with their families and friends–including hundreds of families from mainland China–walked past and took notice of the Falun Dafa booth.

Practitioners offered their congratulations to the graduates while passing out flyers and paper lotus flowers. Many people began reading the flyers on the way to the ceremony, and some asked for more flyers or flowers to give to family members. Some stopped to talk with practitioners and learn more about Falun Dafa. 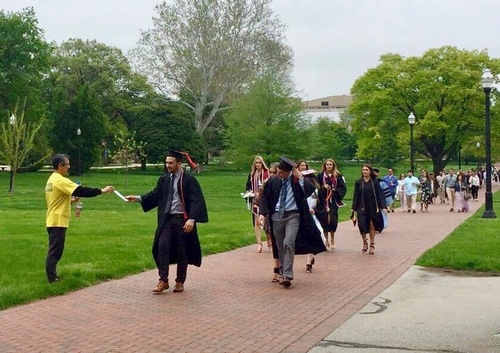 A practitioner passes out flyers and lotus flowers to graduates and their families in front of the OSU library.

Family Thankful for the Information

The Falun Dafa booth and posters were strategically placed near Thompson Library and its monument for the renowned former OSU president. Traditionally, graduates go to this site to have their pictures taken.

A mother with her two children were waiting there. Her little boy was “intrigued” by the paper lotus flowers, she said. The practitioner gave each of them a flower and a flyer to the mother, explaining the practice of Falun Dafa and its principles of Truthfulness, Compassion, and Forbearance. The mother was thankful for the information and flowers.

Many graduates, parents, and family members, both Chinese and Western, stopped to read the practitioners’ poster boards. Some Chinese visitors took copies of the Minghui newspaper, while some took photos of the booth from a distance, perhaps surprised to see Falun Dafa practiced freely on a U.S. university campus, a sight that cannot be seen in China due to the persecution.

One practitioner also passed out flyers about the Chinese regime’s state-sanctioned killing of Falun Dafa practitioners for organs. 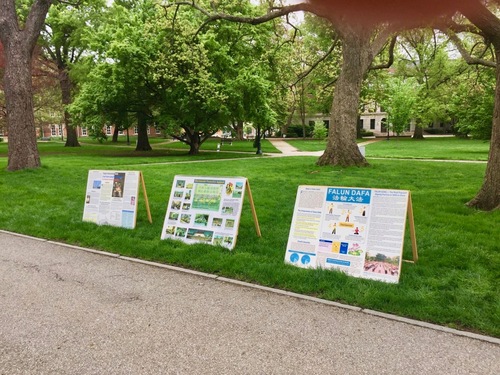 One student came by on his scooter. He was curious to learn about the Falun Dafa exercises. When young practitioners taught him the movements of the first exercise, he expressed interest in learning more and sharing with his friends.

Other families also stopped to watch two young practitioners sit in meditation next to the booth. 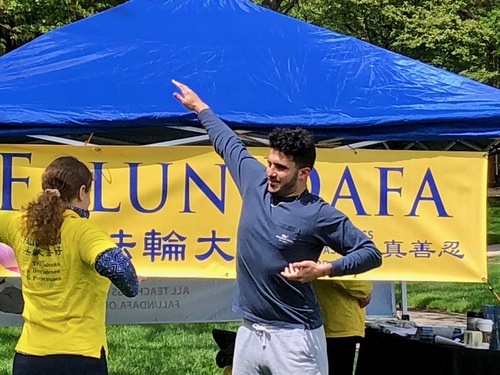