(Minghui.org) Every summer, the season of travel, events, and fun, practitioners of Falun Dafa around the world hold all kinds of activities to introduce the meditation practice to the public and raise awareness of its persecution by the communist regime in China. They can often be seen passing out flyers, demonstrating the Dafa exercises, displaying pictures, and collecting signatures.

This report covers three such activities in Ukraine, France, and Germany.

Practitioners in Ukraine gathered in the capital, Kiev, between May 31 and June 2, where they hosted a series of public events and held a conference to share their experiences in practicing Falun Dafa. 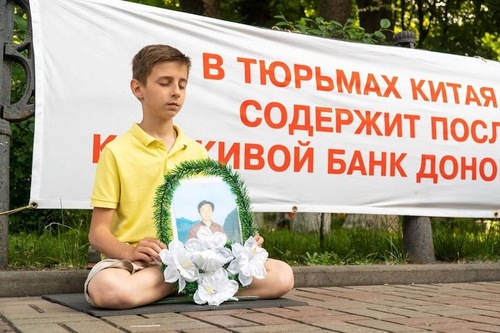 Falun Dafa practitioners in Ukraine peacefully protest the persecution in front of the Chinese Embassy. 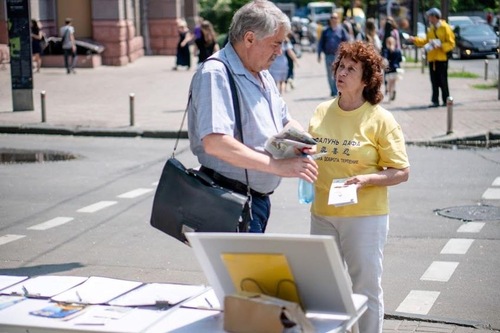 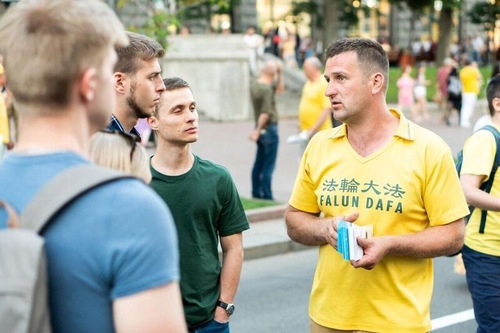 Practitioners tell passersby about the persecution of Falun Dafa in China. 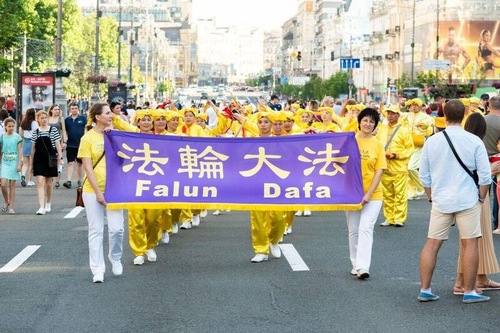 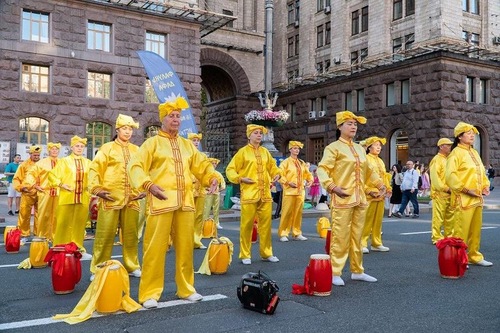 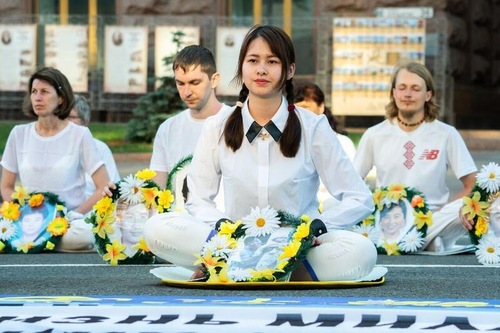 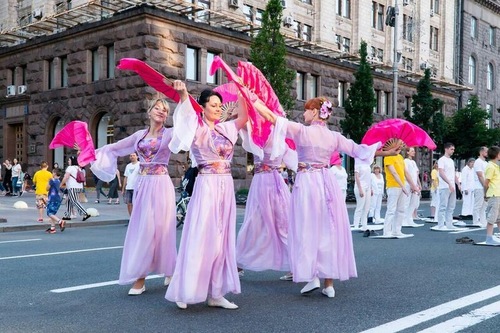 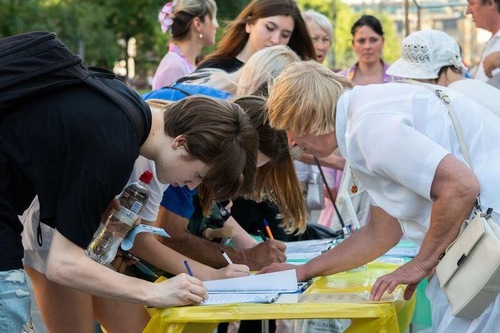 Members of the public sign a petition calling for an end to the persecution in China.

Victoria, who has practiced Falun Dafa for 20 years, told passersby that Falun Dafa has made her more patient and calm.

“I have become kinder to people, and I always try to understand their thoughts. The whole world needs the principles of Truthfulness-Compassion-Forbearance,” she said.

For years, practitioners in Paris have held events almost every weekend on Human Rights Plaza in front of the Eiffel Tower, one of the most visited attractions in the world. 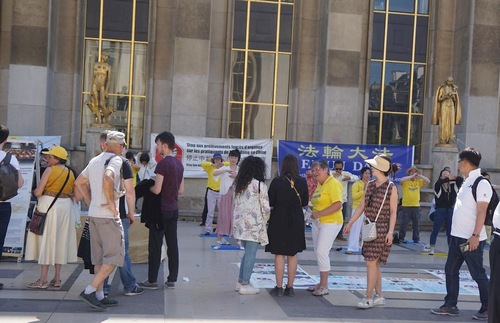 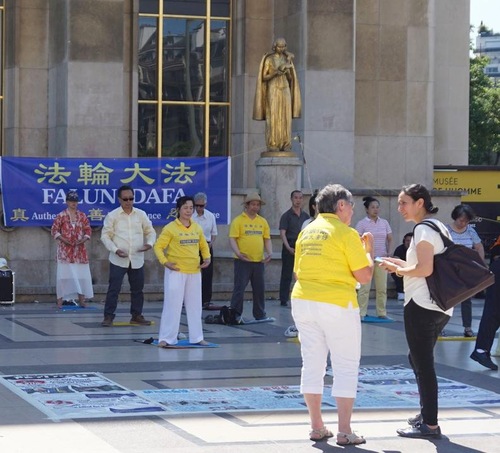 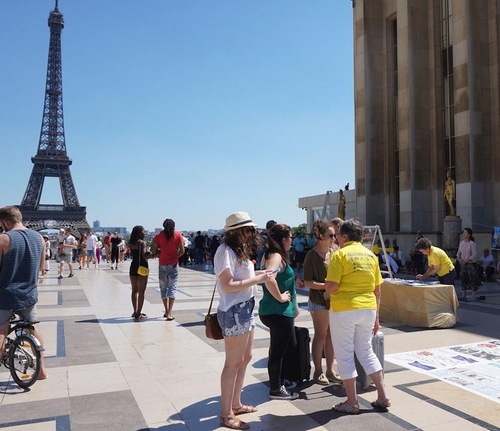 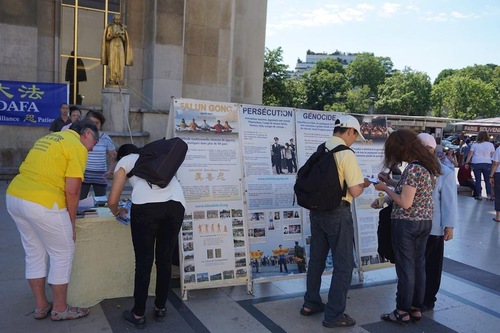 Practitioners display information and talk to tourists at Human Rights Plaza near the Eiffel Tower on Sunday, June 2.

Etui Sandrine, a French woman, expressed concern about the human rights violations in China. She said, “The Chinese economy has developed greatly, and there is much cooperation between China and France. But I had not heard about the persecution until I saw the display boards today.”

As a Christian, she has heard about the suppression of religion in China, but she didn't know about the persecution of Falun Dafa. She signed the petition to condemn the crime.

Vivian Nakachima from the United States signed the petition too. She found Falun Dafa peaceful and relaxing. “There is nothing wrong with this practice,” she said. “Why is it banned in China? People are even being tortured because they practice Falun Dafa. This cannot be tolerated.”

Isabelle and her husband had not heard about the persecution. They were particularly shocked when they learned of the state-sanctioned killing of Falun Dafa practitioners for organs in China.

“Such a large-scale genocide still exists in China today, and I’d never heard of it. It’s shocking,” she said. “We know the Chinese people don't have freedom of belief, but we didn't know about the persecution. The French media has not done a good job of informing the public.” 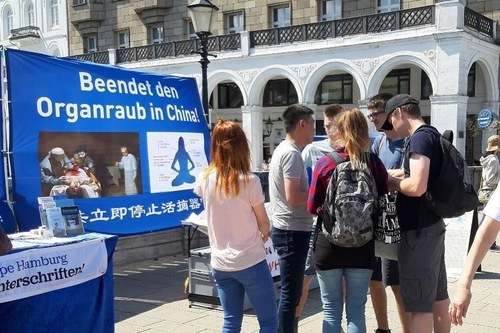 Telling passersby about the persecution 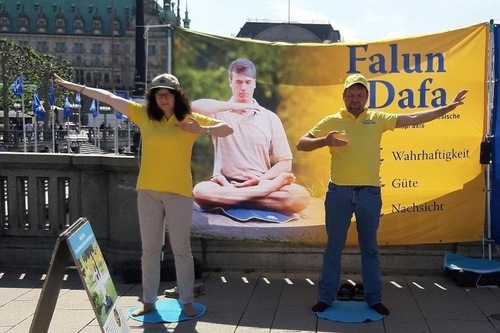 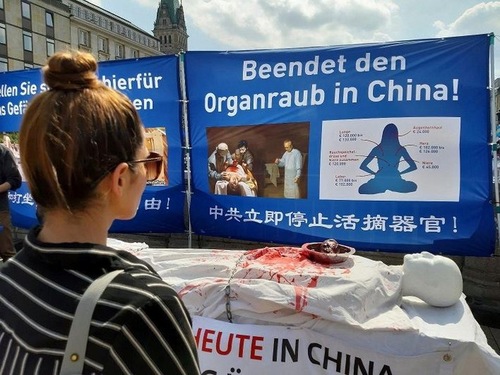 Local resident Aida had heard about the forced organ harvesting from practitioners in China. “I am very sad,” she said. “It is disturbing when I see the facts shown on the boards. It is so easy to kill people. I cannot believe it is still happening.”

As a fan of meditation, Aida said, “This persecution deprives us of freedom. We are all free-thinking people.”

She continued, “You must keep up the good job of informing the public. That's the only way the persecution will ever be stopped. This event changed my view of the world.” 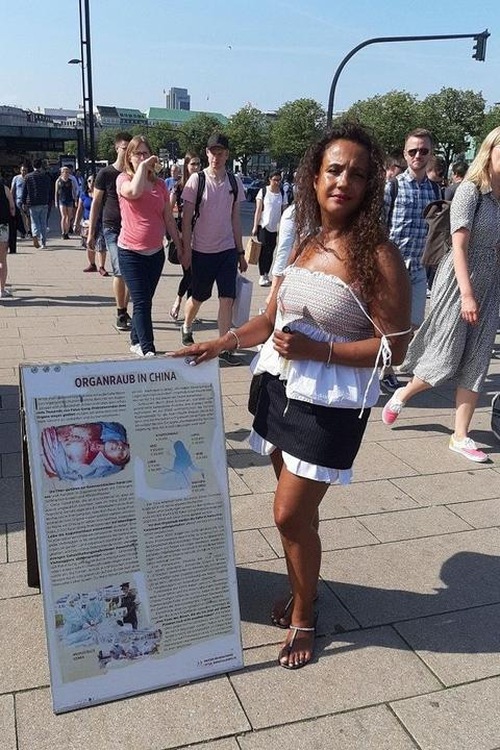 Celine was shocked to learn about the organ harvesting atrocity happening in China. She said, “It is beyond my imagination. I cannot find any words to describe it. It is so inhumane. This is something only demons would do. It is not human.”