May 19, 2019 |   By Minghui correspondents in the United Kingdom and Ireland

(Minghui.org) Falun Dafa (also called Falun Gong) practitioners in the United Kingdom and Ireland celebrated World Falun Dafa Day on the 13th of May with activities in London and Dublin. They commemorated the 27th anniversary of Falun Dafa's public introduction; expressed their gratitude to Master Li Hongzhi, the founder of Falun Dafa; and wished Master Li a happy birthday.

Practitioners held a celebration on Trafalgar Square and a parade in downtown London on May 11th. Many people, including tourists from all over the world, witnessed the beauty of Falun Dafa. Chinese tourists were happily surprised to see the celebration. Some took this opportunity to quit the communist organizations they had joined. 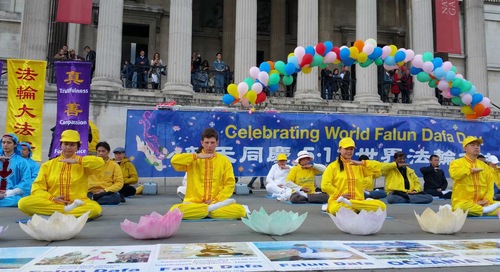 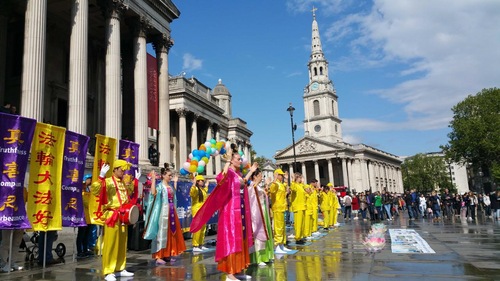 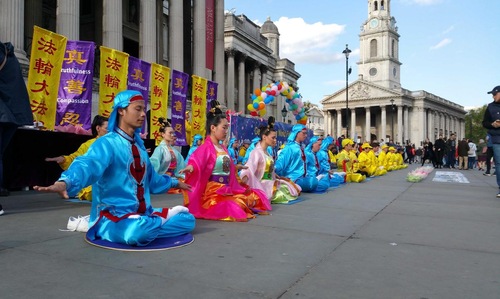 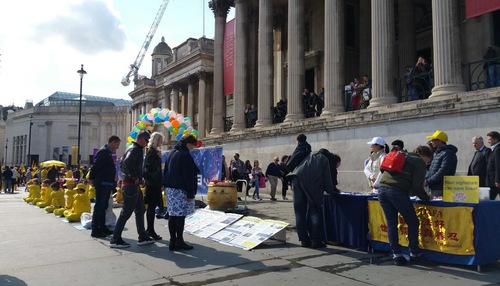 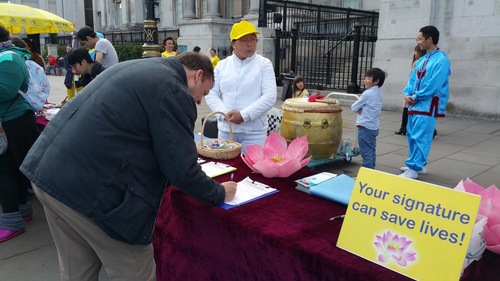 Many people sign a petition calling for an end to the Chinese Communist Party's (CCP) persecution of Falun Gong.

Fascinated by the performances and exercise demonstration, many people read the photo exhibition and talked to practitioners for more details. They were appreciative of the information and encouraged the practitioners to keep up the good work spreading the news. Many signatures were collected on a petition calling for an end to the persecution. Some people expressed interest in learning Falun Dafa.

Chinese tourists stopped to watch the celebration and took pictures. Some talked to practitioners while others called out, “Falun Dafa Day!” “Wow! What a great event!”

Zheng said he saw the Falun Gong exhibition in Chinatown every day and had seen many other Falun Gong activities. He signed the petition, took some introductory fliers, and wanted to learn the exercises by using the instruction available on the Falun Dafa website.

The two-hour parade started at the Chinese Embassy at 11:30 a.m., passed through the busy downtown shopping district and Chinatown, and concluded at Trafalgar Square. 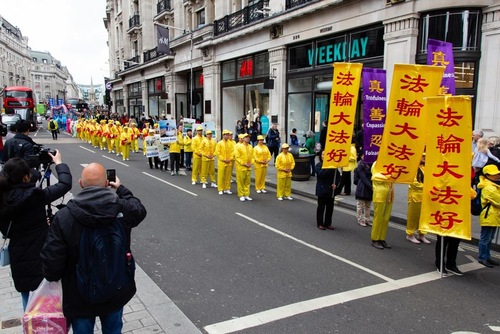 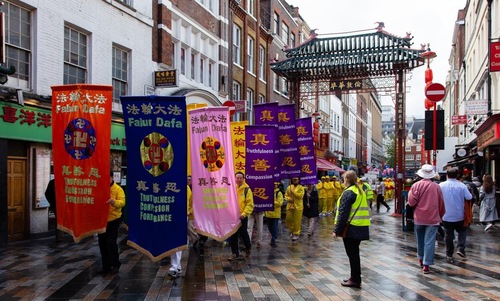 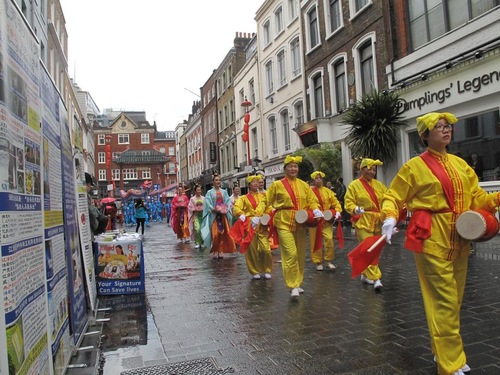 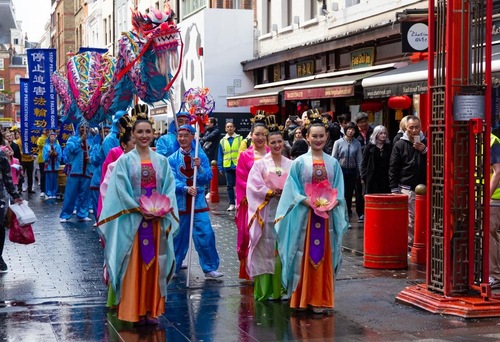 The procession started with colorful banners reading “Falun Dafa Is Great,” “Truthfulness Compassion Forbearance,” and Falun emblems. A group of practitioners in matching yellow outfits demonstrated the Falun Gong exercises, followed by waist drummers, dragon dancers, and elegantly dressed celestial maidens. Banners calling for an end to the persecution of Falun Gong in China followed. Practitioners dressed in white held pictures of their fellow practitioners who have died as a result of the persecution.

Crowds of spectators lined the streets and took pictures and videos of the parade, calling out: “Beautiful!” “Positive!” “It brings hope.”

Falun Gong practitioners in Ireland celebrated World Falun Dafa Day with a large parade in downtown Dublin on May 11th. It was a beautiful day and the spectators seemed impressed by the beauty of Falun Dafa. 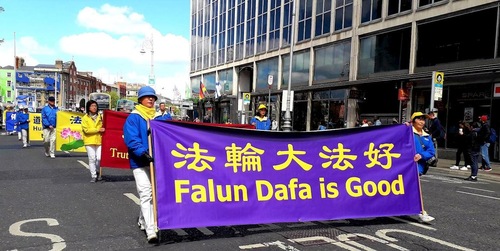 The parade procession included a Tang Dynasty drum team, a float, waist drummers, and large banners. It started at the War Memorial Gardens and went down O'Connell Street.

The police officers on duty already knew the facts about Falun Gong, having seen Falun Gong's peaceful activities calling for an end to the persecution in past years. They respect the practitioners and were happy to help them throughout the parade.

The parade ended at the end of Grafton Street in downtown Dublin, where practitioners performed a drum dance, a lion dance, and a lotus dance; gave an exercise demonstration; and sang as crowds of people watched. Many signed a petition calling for an end to the persecution. Some wanted to learn the exercises.