(Minghui.org) During the Chinese New Year season while many Chinese tourists were visiting Melbourne, Falun Gong practitioners held activities at popular tourist attractions to raise awareness about the persecution of the practice in China.

Many of the Chinese tourists who learned about the brutality and injustice of the persecution chose to quit the Chinese Communist Party (CCP) and its affiliated organizations to denounce the CCP and its crimes.

The Chinese regime launched a persecution campaign against Falun Gong in 1999, and practitioners in China have suffered unlawful arrest, torture, and other forms of abuse for the past two decades. Falun Gong is a self-improvement system made public in China in 1992 and that grew to nearly 100 million followers. 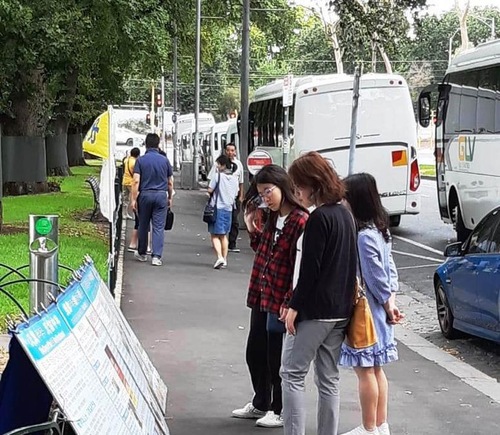 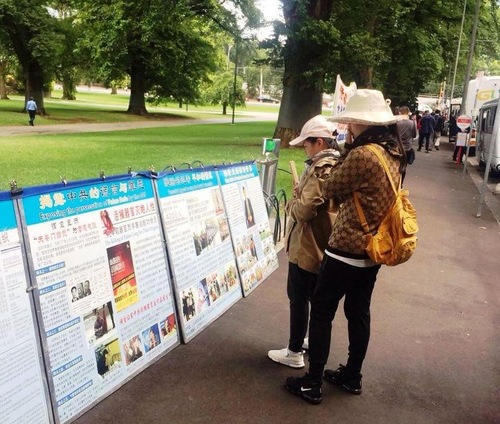 Chinese tourists read about the persecution of Falun Gong on posters displayed at the entrance of the Fitzroy Gardens in Melbourne in February 2019.

Why Practitioners Volunteer to Raise Awareness

In February 2019, Mr. Liu was busy telling passersby about the persecution with a poster in his hands. A man walked up to him and asked if he was being paid to do this task. Mr. Liu explained that no one paid him or asked him to do it; he volunteered to do this in his spare time. The man didn’t believe him, so Mr. Liu told him a story.

“There was a piece of news about an old man. After a thunderstorm, a river had flooded the street, and the old man found that a manhole cover had been flushed away. The old man chose to stand by the manhole until the flood subsided so that no one fell in the hole. Would you suspect that the man was paid to do that?” Mr. Liu asked. The man replied that money wasn’t important in that case, because someone’s life might be in danger and that he would have done the same under the circumstances.

Mr. Liu agreed and said that telling people about the persecution was the same as standing by the manhole – both were meant to save lives. “We want people to know about the persecution and see the evil nature of the CCP so they can avoid it, like the old man wanting people to avoid the manhole.” The man nodded and began to read the poster in Mr. Liu’s hands. After he was done reading the poster and asking questions, Mr. Liu suggested that he quit the CCP. The man agreed to do so without the slightest hesitation.

People’s Lives Would Be Better Without Corrupt CCP Officials

A woman once told Mr. Liu that the CCP was kind enough to give her a pension so that she could travel during her retirement. Mr. Liu explained that the money came from taxes paid by honest hardworking people like her children, not the CCP. The woman couldn’t imagine China without the CCP. Mr. Liu told her that over the entire course of Chinese history a new dynasty always emerged after the previous one dissolved, and China was still China.

Mr. Liu then told her that there were too many corrupt CCP officials in China and without them people’s lives would be much better. He explained that there was no point in combating corruption if everyone was corrupt. “Can you name one official who isn't corrupt?” he asked. She pondered the question and replied, “You are right, there isn’t. The Party is corrupt to the core.”

Mr. Liu told her that one day the CCP would have to pay for the crimes it had committed against its people, and that whoever had joined its affiliated organizations would be held responsible for its wrongdoings. The woman accepted Mr. Liu’s suggestion to quit the CCP affiliated groups she had joined.