(Minghui.org) More than 30 high school and college-age practitioners from throughout Taiwan attended a five-day Falun Dafa youth camp held at TransWorld University in Yunlin County on January 23-27. The attendees said they truly benefited from the rich schedule of Fa-study, sharing meetings, seminars, and field activities. 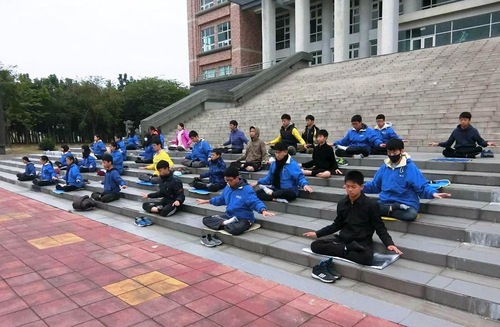 Shen, the camp organizer, said that this year's agenda had been improved with the addition of professional skill exchange classes and diversified interest classes. The camp also invited speakers to give seminars.

On the last day of the camp, all of the practitioners wished Master Li a happy Chinese New Year before an experience sharing conference.

Student Wu shared that talking about the facts and merits of Falun Dafa to tourists was like an exam, testing how much he knew of the Fa teachings himself. If he couldn't answer a person's question, he knew he was missing some facts.

Another student who clarified the facts at the Sun Moon Lake Tourist site said, “When Chinese tourists chanted 'Down with the Communist Party!' or 'Falun Dafa is good! Truthfulness, Compassion, Forbearance is good!', my negative thoughts and human notions disappeared.”

“Events at a tourist site exposed my shortcomings,” said Wu. “When the activity coordinator assigned me to demonstrate the exercises, I declined, and passed out fliers instead, arguing in my mind that I had practiced the exercises in the morning already. I looked inward later that day and noticed that my refusal to cooperate and not help the group was rooted in selfishness.”

He continued, “I decided to let go of the selfishness immediately. This is cultivation, a true instance when one can improve one's character.” 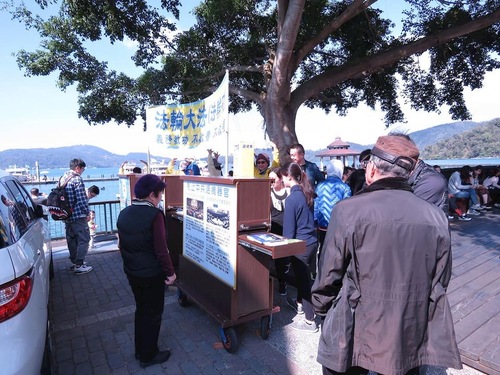 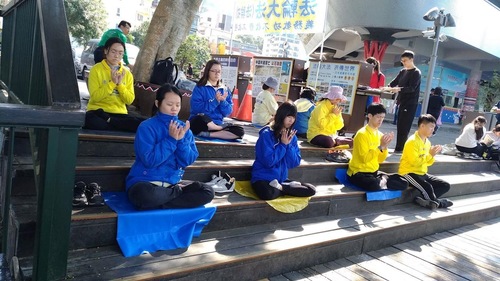 Another student named Wu, who studies at a military college, said that the tourist site activity helped him to eliminate some human notions. While passing out fliers, he was happy with people accepting fliers from him, but he sensed that he was missing a chance to save people. He said when he noticed it and truly resolved to save the sentient beings, a strong compassion developed from deep within his heart.

“Because I am in the military,” he said, “I have little spare time, so I am lagging behind in my Fa-study and exercise practice. I cherish the opportunity to clarify the truth with fellow practitioners.”

Lin, a graduate student at the National Defense University, said that fellow practitioners helped establish a strong and righteous environment that cleared away the fear in his mind.

When he noticed the coordinating student was overwhelmed and forgetting things, he thought it should be easy, and developed the notion to show off his skill. He then remembered Master's teachings and realized that this was a human notion. So he quietly assisted the student without showing off.

There was also a singing activity at the tourist site. He said, “I was deeply moved while singing 'Come For You' in a chorus. We were calling from our hearts to awaken people and to save them.”

When the choral activity was about to end, a large group of tourists arrived. Young practitioners decided to stay and sing for them. Many tourists from China appeared to be moved by it. They listened quietly and took photos and videos.

Zi-hsiang was the leader of the photography team, and a “perfectionist.” The camp and busy activities gave him a chance to let go of perfectionism and his anxiety.

“It used to be an exhausting task to be a photographer for the youth camp and activities. I didn't know if I could handle it because I was the team leader this year.” Zi-hsiang said. “However, the outcome was surprising. I calmly completed all the activities without the usual anxiety.”

He attributed the success to xinxing improvement. He said, “On the surface, I was more capable, so I could better handle all these matters. But I knew the capabilities were connected to xinxing. Only a higher xinxing level can bring out the changes on the surface and more capabilities.”

Zi-hsiang had feared attending activities because previous conflicts with fellow attendees had left a shadow in his heart. He found the courage to attend after finding the root of his fear.

“A conflict is a chance to expose a hidden attachment,” he said, “so that I could improve my character through it. If the attachment is there, even though I may not encounter a conflict during the camp, I still can face it at other places. The camp helped me put down the fear and to face the conflict calmly and openly.”

Student Kuo from the Taiwan Institute of Technology said that this camp had the richest agenda in his experience and he thus benefited a lot. He said that the most memorable activity was the “World Cafe” forum during which attendees discussed how to find young practitioners who had lost contact with Dafa groups or had not participated in activities for a long time.

“This course taught me to see through the surface,” said Kuo. “And an understanding gained in the process was the highest achievement of my attending the youth camp.”

“(As a discussion leader,) I tried to inspire attendees to think and complement each other. I was devoted to the forum, and put myself in the shoes of those who had lost contact with the group or not participated in activities for a long time.

“I looked back at the forum at the end of the camp, and realized that it was the power of selflessness and truly acting for the benefit of others that was instrumental in my gaining much wisdom.”