Tour Guide in Taiwan: “Remember to Quit the Communist Party!”

(Minghui.org) As 2019 draws to a close Taiwan is blessed with sunny weather. Falun Gong practitioners greet the crowds of tourists from around the world who visit the National Dr. Sun Yat-sen Memorial Hall in Taipei. The practitioners demonstrate the exercises and talked to people about Falun Gong and the persecution. 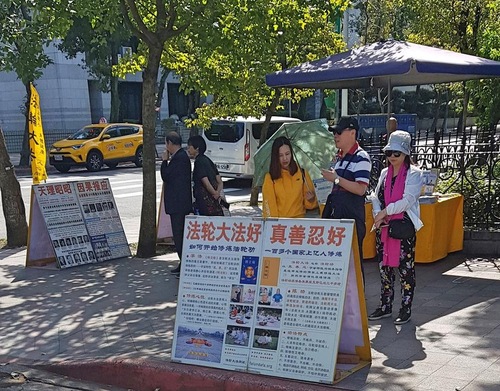 Tourists from around the world stop by the practitioners' display and learn about the persecution.

A Chinese Tourist Takes Falun Gong Information for His Family

A Chinese man from Guangdong Province came to the Falun Gong exhibit and took photos of the displays. He chatted with a practitioner and told her that he had taken several introductory flyers from a Falun Gong information booth in Hong Kong a few years ago. He said, “I haven't seen a complete exhibition like this. I would like to take photos of all the display boards.”

As he moved to the second display board about the so-called “Self-Immolation on Tiananmen Square,” the man said, “This one is important. I have to take a video line by line.” He then recorded a video.

The man told the practitioner, “The Chinese people don't trust the Communist Party at all. Those who say they do are only doing it for their own safety. They appear to trust the Party, including the officials. I'm sure that the Party officials swindle people! I hope that you treasure your democracy and freedom in Taiwan. You will lose it if the Communist Party comes here.”

He said he would show his son the videos he recorded, “He doesn't believe the Communist Party either.”

Young Man from Canada: “I Stand with You!”

A young man from Vancouver asked a practitioner several questions about the persecution. He had visited Beijing for a month with an intention to start a business. After hearing the Communist Party's atrocities in Xinjiang and Hong Kong, he decided not to do any business that may involve the Communist Party. He said, “Western people are beginning to see more and more clearly the evil nature of the Chinese Communist Party! It has done what demons would do!”

The young man was concerned about the safety of Falun Gong practitioners. He said, “I hope you will be safe and won't be harassed by the Communist Party. I hope the persecution ends soon!”

The young man took photos of the display about the persecution. He said, “I empathize with those Falun Gong practitioners who are being persecuted. People should have freedom of belief. I stand with you!”

Tourist from China: “I Learned about the Persecution in China”

The woman's mother took a copy of introductory brochures.

One man happily exclaimed, “I've finally found you! I will sign the petition. I'll sign every petition for Falun Gong!” The man said he's been trying to find out more information about Falun Gong due to the changing situation in China. He took various introductory materials to read.

A tour guide gave her group a detailed list of reminders before she let them go. Pointing at the Falun Gong information booth, she said, “We'll gather at the Falun Gong booth. This is your landmark. Falun Gong is always a landmark when you tour in Taiwan. You will be fine as far as you can find practitioners. Remember to quit the Communist Party!”