(Minghui.org) (Continued from Part 13) Su'aoxin is a train station in Yilan County in northeastern Taiwan. After a major accident occurred on the Suhua Highway in October 2010 during Typhoon Megi, Chinese tourists who travel between Hualien County and Taipei now usually make their transportation transfers here. Suaoxin is thus an important hub in the region and provides an opportunity for local Falun Gong (also known as Falun Dafa) practitioners to welcome Chinese tourists from many places.

“The connection time here is usually less than one hour and hundreds of tourists from mainland China often rush in during that time,” said Mr. Lin, a practitioner who comes to the station regularly. He is the owner of a plastic bag factory in Suao Town and shared that practitioners who come here to reach out to Chinese visitors are from all walks of life. “We have benefited from Falun Gong and feel obliged to inform Chinese tourists about the real story of the practice; otherwise, they may continue to be fooled by the lies of the Chinese Communist Party (CCP),” he said.

Practitioners often present information about Falun Gong through posters, speakers, and one-on-one conversations. Their kindness and sincerity have earned the trust of Chinese tourists. Some smile or wave to the practitioners, and some give them the thumbs-up. “Thank you for doing this, please keep it up,” a tourist from China once said, encouragingly. 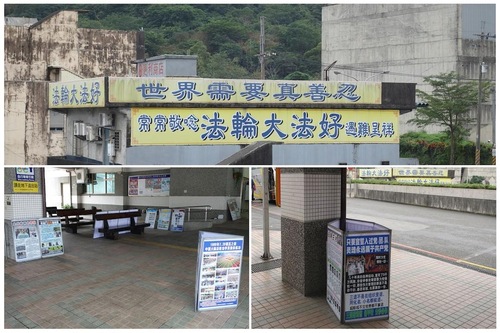 Banners and posters set up by Falun Gong practitioners at Su'aoxin Railway Station in Yilan, Taiwan. The banner at the top reads, “The world needs Truthfulness-Compassion-Forbearance.” The banner below it reads, “Falun Dafa is good.”

Impressed by practitioners' selfless efforts, a railway officer suggested that practitioners put their banners up on a nearby residential building. After receiving approval from the property owner, the banners are now displayed right outside the train station, greeting travelers with the words: “The world needs Truthfulness-Compassion-Forbearance.”

Tourist: “A Symbol of Righteousness”

Mr. Lin, a retired math teacher, said that practitioners have maintained their presence at the train station for eight years. “In the beginning, some tourists had bad attitudes and even swore at us. Later on, there were fewer and fewer such instances,” he explained. One time during a conversation, a tourist commented that safeguarding Falun Dafa's principles of Truthfulness-Compassion-Forbearance is a battle with the CCP, “You are a symbol of righteousness. So the posters in your hands must be righteous as well.”

Mr. Lin said that some tourists who already understand the truth about the persecution of Falun Gong in China call out “Falun Dafa is good.” Some tourists are willing to quit the CCP and its affiliated youth organizations after hearing the list of crimes committed by the Chinese regime, information that has been censored in China, but they may be hesitant to do so in front of the rest of their tour group. “Occasionally, they may stay behind and when a practitioner talks with them individually, they agree to renounce the CCP organizations,” he said.

Mr. Zeng, a high school teacher, often comes to the station with his wife. He said that helping Chinese tourists learn the truth about the CCP's propaganda is a joint effort with practitioners from other regions. “This station is the end point of the Yilan line and the start point for the North-link line. That means that these tourists may have seen information about Falun Gong in other places in Taiwan.” He continued, “Sometimes they decide to separate themselves from the CCP after just a few words.” 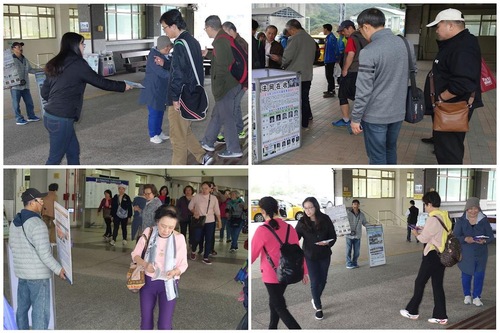 Volunteering for the Common Good

Mr. and Ms. Lin (the surname Lin is among the most common family names in Taiwan) are both in their 80s. One of the questions Chinese tourists often ask them is, “How much money do you get for standing here?” When that happens, Ms. Lin said she does not feel offended since she knows that the tourists have been ingrained with the Chinese Communist Party's propaganda. “We are all volunteers, and we print the posters and other materials using our own money,” she tells the tourists. “We are here to help you understand what's really going on.”

Ms. Liu said she occasionally comes across practitioners from mainland China among the tourists, who are very thankful for overseas practitioners' efforts in raising awareness of the persecution in China. “One time, a tourist gave me something wrapped in paper and left hastily. I opened it and found it was 500 yuan. Since I could not return it, the money was used to purchase a speaker so more people could know about the human rights violations in China,” she said.

An Oasis of Hope

Every practitioner who comes to the station has his or her own story to tell. Ms. Chen, a hairdresser from Yilan County, had suffered from kidney bleeding for 15 years. In addition to a two-centimeter (about one inch) uterine tumor, and osteoporosis in her knee that required steroid injections every three months to relieve the pain, she also suffered from sciatica and tonsillitis. As a result, she needed medication every day and injections once every two days. Any time Ms. Chen skipped the medication she would get a fever. All of these illnesses were eliminated after she began practicing Falun Gong.

To share the practice with more people so that they can also benefit from Falun Dafa, Ms. Chen comes to the railway station on a regular basis. “Some Chinese tourists do not dare take our materials on their own initiative. But if one of them takes materials, others will follow,” she said, “Some tourists cannot wait and read the materials right away. Even while leaving, some tourists still look back at at the posters for a last glimpse.”

Ms. You, like other Falun Gong practitioners, has witnessed many miracles since she took up the practice. Two weeks after becoming a Falun Gong practitioner, her chronic insomnia, ear effusion, inverted eyelashes, and beriberi all disappeared. Not only that, although she had little education, she was able to read Zhuan Falun, the book containing the main teachings of Falun Dafa. “I am almost 80 years now and practicing Falun Gong is the most fortunate thing in my life,” she remarked.