(Minghui.org) Falun Gong practitioners participated in a city festival at Ivanov Park in St. Petersburg at the beginning of September. Over 8,000 people attended the event. Upon learning about the persecution of Falun Gong in China, many visitors encouraged practitioners to continue their efforts to raise public awareness about the atrocities in China. Others wanted to learn the Falun Gong exercises. 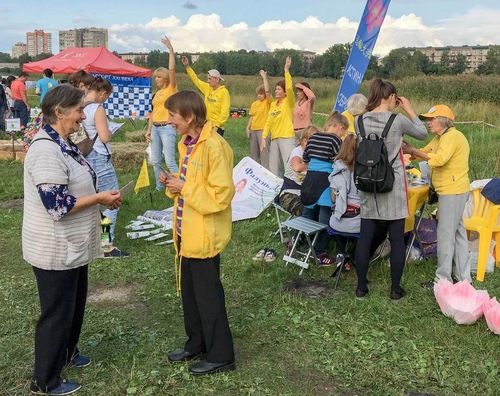 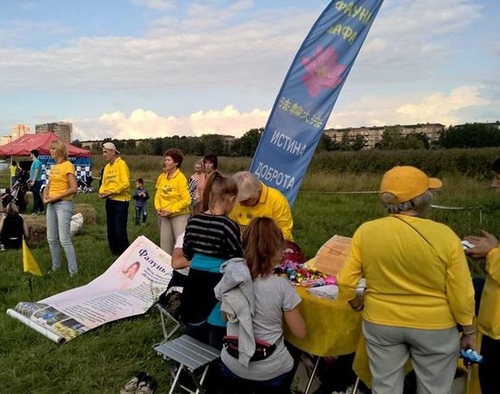 Practitioners demonstrate the Falun Gong exercises and raise awareness about the persecution in China at a city festival in St. Petersburg.

Maria works as a massage therapist near the park. She observed the Falun Gong exercises for quite some time and said, “I heal others, but am not happy about my own health. I now understand that the mindset is the key. I would like to learn Falun Gong from you.”

A couple read the Falun Gong information boards. The husband shared that he knew a lot about oriental exercises, but what he'd read today provoked some new thoughts. He said that he would like to spend more time researching Falun Gong.

A woman stopped by the Falun Gong booth with her daughter. She said that she had encountered Falun Gong before, but hadn't been able to spend time learning about it. She said, “We are so lucky to have stopped by!”

Vera, a legislative representative from a nearby area, visited the festival to research the possibility of bringing similar festivities to her city. Falun Gong piqued her interest. She took all the informational materials available as well as an origami lotus flower. She said that she felt “friendliness and open mind” at the Falun Gong booth.

Practitioners also prepared an activity for children called “Petals of the World.” Two kindergarten teachers joined in and with the children they made beautiful origami lotus flowers. They noted that making the lotus flowers developed patience, a very important quality. The teachers also took some lotus flowers and Falun Gong materials with them to use in their classrooms.