(Minghui.org) About 10,000 Falun Dafa practitioners from 56 countries attended the 2018 Washington DC Falun Dafa Cultivation Experience-Sharing Conference at the Capital One Arena on June 21. Master Li Hongzhi, the founder of Falun Dafa, gave a lecture and answered questions submitted by practitioners in the audience.

Many attendees commented that they were greatly inspired by Master Li's lecture as well as the speeches presented by their fellow practitioners at the conference. 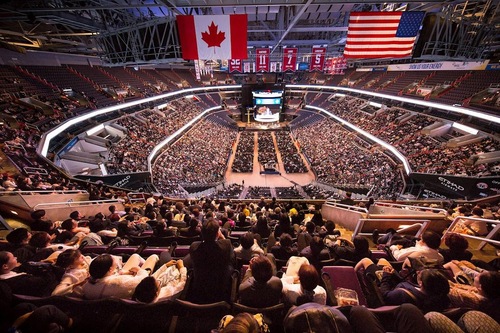 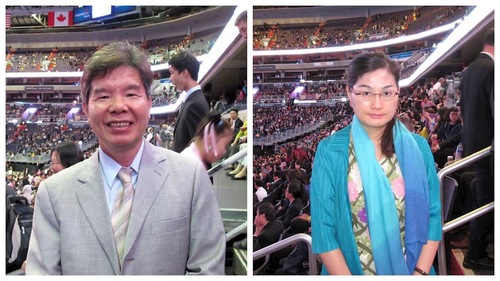 Attending the conference was Zhang Hanyuan and his wife Wu Yixuan from Taiwan, who started cultivating in 1999. News reports on the persecution of Falun Dafa in China caught their attention. They figured that what the Chinese Communist Party oppressed must be very good, and they began to read more about Falun Dafa. They soon joined the practice.

“I found Falun Dafa to be a very remarkable and profound cultivation school,” says Ms. Wu.

The couple owns several publicly traded companies in Taiwan. They follow the principles of Truthfulness-Compassion-Forbearance to manage employees and distributors in their daily business operations.

The couple also spends a lot of time promoting Falun Dafa to help others experience the benefits that they have. Their businesses have been growing steadily. Ms. Wu said, “The spirit of running a business is not about making a certain amount of money; it's about caring for your employees and their elevation in arts and morality.”

The couple bought an office building in the city center in Taipei. They put a nine-story-tall banner of Shen Yun, a classical Chinese arts performance, on the building's exterior. “We are thankful for Master's help and support. We obtained blessings and wisdom for our businesses, thanks to our cultivation. This is all from Master and we would like to give back to Dafa.”

The couple was especially moved by a speech given by a Western practitioner at the conference. After taking up Falun Dafa, this practitioner was able to give up his addiction to drugs and alcohol, graduate from a top university, and become a manager at a Fortune 500 company. He learned to unconditionally search inward amidst conflicts. A piece of paper with “harmony and collaboration” on the wall of his office constantly reminds him to improve xinxing and put himself in others' shoes.

“His story serves as a great reference for us and how we handle our business,” said Mr. Wu. “Through this young man's sharing, I have enlightened that I should require myself to unconditionally search inward and change myself first.” 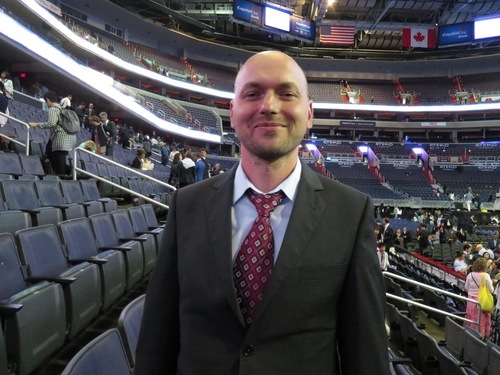 “It was so great that Master came to the conference! My understanding of the Fa has deepened,” said Ilya Rzhevskiy, an engineer from Germany.

Mr. Rzhevskiy discovered Falun Dafa in 1999. He says that the speeches at the conference were directly related to his current cultivation issues. “I compared myself to them and am thinking about how I can improve my cultivation.” 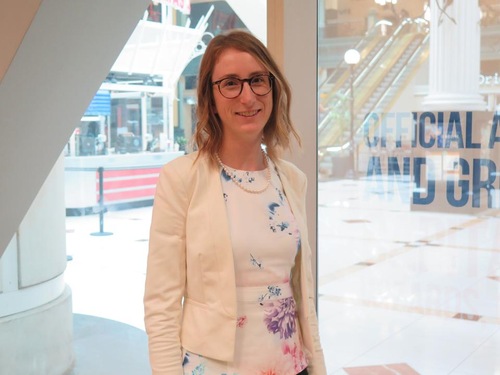 “Listening to Master's lecture and answers to our questions, I experienced immense compassion. I felt as if I had been reborn, as innocent and as happy as a newborn infant,” said Tegan Davies, an environmental consultant from Australia.

Ms. Davies first learned of Falun Dafa from her mother. She was a Ph.D. student then. Life and study caused her much stress and she started losing her hair. Her ability to study efficiently also declined.

She began to read the main Falun Dafa book Zhuan Falun. To her surprise, she got answers from the book to many spiritual mysteries, which she had discussed with her mother when she was a little girl. They had both thought that there were no answers to these questions. After learning the practice, she found that her ability to study improved and her hair grew back.

The conference speeches provided a lot of inspiration for Ms. Davies. One presenter told how he clarified the truth to his middle school classmates. Ms. Davies said, “Falun Dafa practitioners in mainland China are able to overcome fear to clarify the truth. I live in the free world. I should have no fear and do better.” She plans to reach out to businessmen in her country and inform them about the persecution in China. 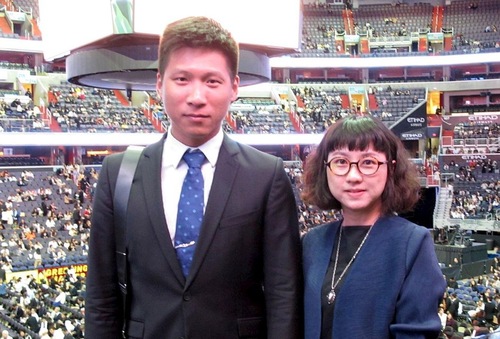 Mr. Wu Jiawei and his wife Ms. Hu Xinyun are both architects from Taiwan. Mr. Wu started cultivating with his parents at a young age. Ms. Hu began her cultivation after interacting with her husband's cultivator friends and finding them to be “very peaceful, genuine, and trustworthy.”

She and her husband joined efforts to raise awareness of the persecution, including producing TV programs for New Tang Dynasty Television (NTD) to document the persecution. Even though it's hard work and takes much of their spare time, they are pleased to be helping out.

The couple has traveled to America to attend an international Fa conference three years in a row. They say that each time, they feel that they have received an injection of new motivation to be more diligent in their cultivation. The sharings at the Fa conferences encourage them to study the Fa more and cultivate more solidly.

“I live in a relaxed cultivation environment in Taiwan. I have no excuse to slack off,” Ms. Wu said.

Have More Steadfast Belief in the Fa 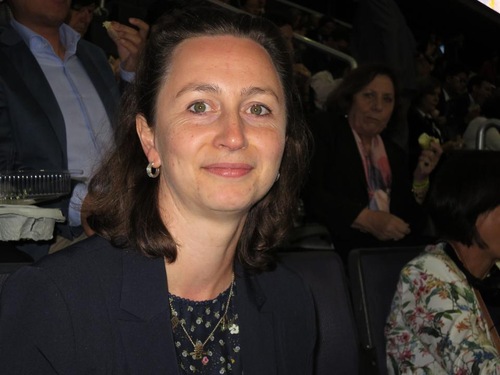 Veronica Müller from Germany started cultivating in 2002. She attended the 2018 Washington DC Fa conference because she wanted to raise awareness of the persecution in China through different activities such as the rally and the grand march.

“I was inspired by a speech today regarding clarifying the truth to politicians,” she said. “The practitioner started cultivation in 2011. I found the story quite relatable because I am also clarifying the truth to politicians in Berlin. I would like to carry this out in more depth. This practitioner established solid connections with politicians. I was very touched by his speech because he improved so fast in a very short period of time.”

Ms. Müller added, “I was particularly touched by this practitioner's sharing because he took immediate action without thinking too much. He asked for Master's help when he encountered difficulties. I think this is very important. We should be steadfast in our belief in the Fa.” 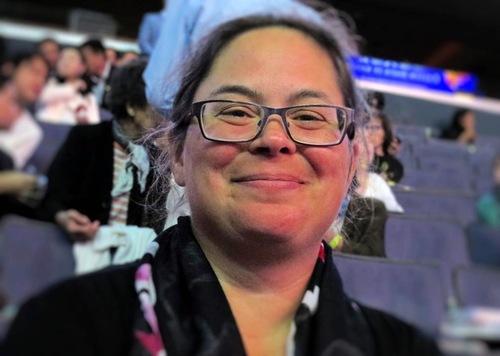 Nina Pegmann from Switzerland said, “From listening to the speech by a New York practitioner, I realized that we should take many things lightly so we can resolve small issues smoothly.

“The practitioner described his experience of how he saw himself becoming very tall and saw himself distributing materials and clarifying the truth.”

Comparing herself to this practitioner, she said, “When I interact with my communities, such as my daughter's school, sometimes I treated myself as a small figure, the opposite of this practitioner. I will remember his courage and his experience of being very big and tall. I will let go of fear in my truth-clarification efforts.” 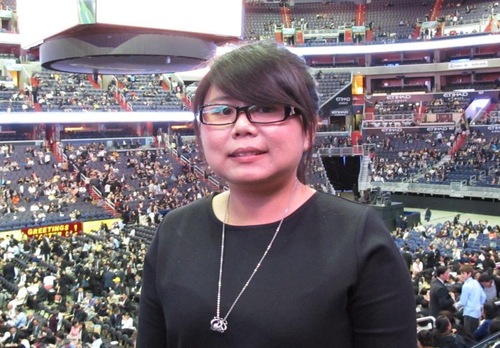 Luo Lihui says that each Fa conference is very solemn. She cherishes each opportunity to attend a Falun Dafa conference.

Luo Lihui was very ill in 2011. She started thinking about the purpose of life. Even though she had a good job and money, she longed for a higher purpose. She wanted to take up a spiritual path but didn't know which practice to go with.

Her aunt introduced her to Falun Dafa and told her that Dafa cultivation targets the heart and could help her to attain inner peace. Ms. Luo liked this and began cultivation.

Ms. Luo also shared a realization she had during the conference: “Everything we encounter, even if it seems simple or trivial on the surface, contains Master's ingenious arrangements for our cultivation. We should constantly search inward, let go of our attachments, and cooperate as a one-body. Cultivation is not to validate oneself but to validate the Fa and save people.”

Cultivation Is the Entirety of My Life 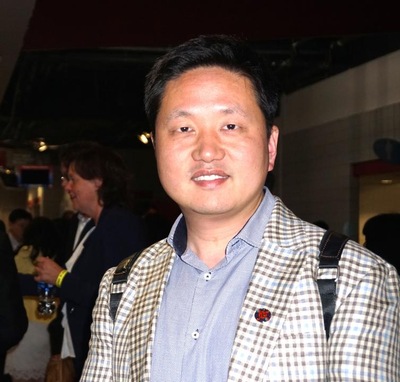 Ou Heng works at a large insurance company in France. He says that he hasn't attended a large-scale Fa conference for 6 years and experienced a low point in his cultivation. “I have made progress in my ordinary job but have taken a step back in my cultivation.”

“Master gave me hints once I had the wish to cultivate well. I found an attachment of mine: muddling through. I used to think that it was an attachment to comfort, but I couldn't get rid of it. I now know that the attachment of comfort may just be a superficial manifestation. At the deeper level, it's my attachment to muddle through. I wasn't serious enough in my cultivation; this invited persecution from the old forces. I was buried deep in my attachments. Once I realized it, I sensed huge changes in myself.

“While listening to practitioners' speeches, I realized that when I had only made a tiny bit of improvement, I would very soon be affected by the attachment of elation. I see a huge gap between my cultivation and the requirements of the Fa. I am also encouraged and learned a positive lesson. I have no other choice but to do better.