(Minghui.org) Falun Gong practitioners in Singapore held events in Hong Lim Park to commemorate the 19th anniversary of the April 25 peaceful protest in Beijing on April 17, 2018. They also gave support to the 300 million Chinese who have withdrawn their memberships in the Chinese Communist Party (CCP) and its affiliated organizations.

The practitioners did the Falun Gong exercises together, collected signatures to protest the CCP's state-sanctioned harvesting of organs from living Falun Gong practitioners, and held an art exhibition to raise awareness of the CCP's persecution of Falun Gong. 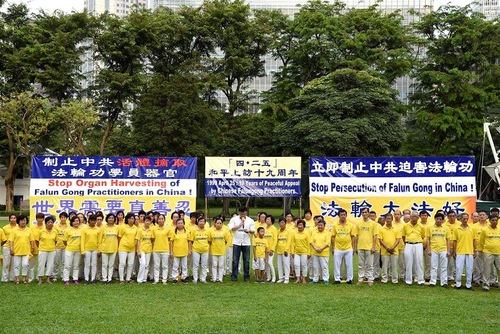 Falun Gong practitioners in Singapore hold events in Hong Lim Park to commemorate the 19th anniversary of the April 25 peaceful protest in Beijing. 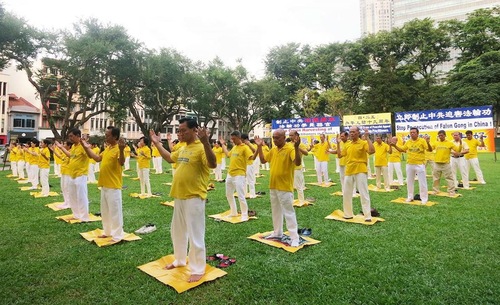 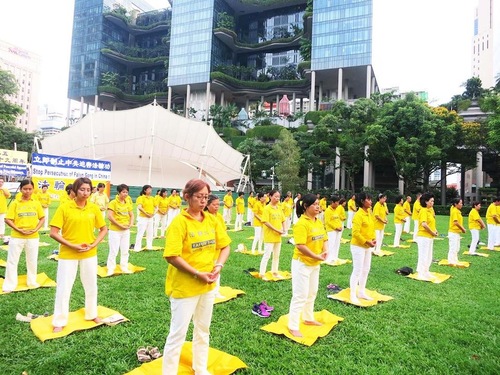 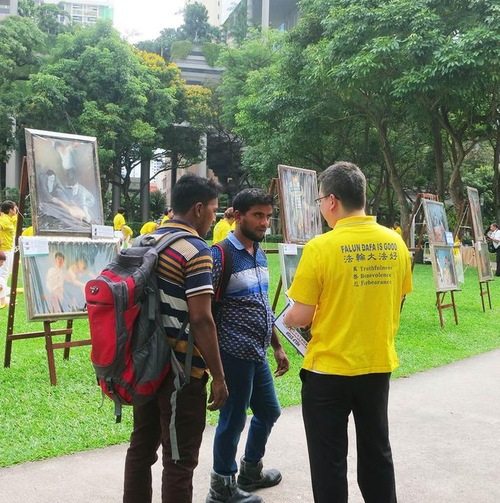 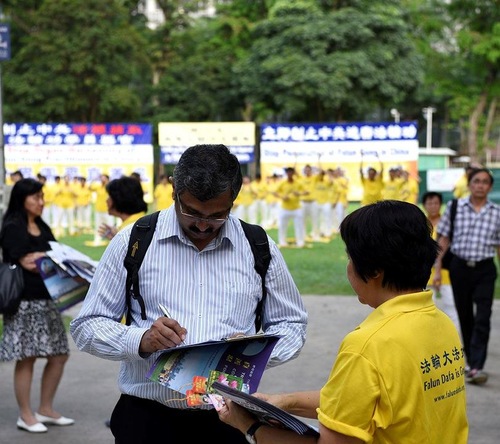 Dr. Huang Weiqiang of the Singapore Falun Dafa Association said in his statement that on April 25 nineteen years ago, ten thousand Falun Gong practitioners went to Beijing and held a peaceful protest. He added that the CCP has committed unpardonable crimes since it took power in China and that a new China without the CCP will appear.

Among the passersby are locals, students, and workers from other countries, as well as tourists. After learning about the CCP's live organ harvesting from Falun Gong practitioners, many of them signed the petition calling for an end to the atrocity.

The passersby were supportive of the practitioners' efforts to stop the persecution. Some said they had seen Falun Gong practitioners in their own countries.

Kafnarina from Singapore was riding her bike through the park. She asked a practitioner, “What's happening? Why does the CCP persecute Falun Gong? Is this ongoing?”

Kafnarina expressed her hope that more people would find out about the issue and asked for a Facebook address. The practitioner gave her more information and told her to watch an online documentary. She signed the petition to express her support of Falun Gong.

Bryan from Malaysia said he had never heard of Falun Gong or the persecution. After a practitioner told him about live organ harvesting, Bryan signed the petition without hesitation.

A visitor from Dortmund, Germany, said that he had seen Falun Gong practitioners in Germany before. He said, “The practitioners in Dortmund demonstrated the Falun Gong exercises and distributed informational materials at several universities. Their unceasing efforts to raise awareness has had a good impact.

“Five years ago, few people knew about Falun Gong. More and more people are gradually learning about it and about the persecution in China.” He said he admired the practitioners.

He was appalled by the government-driven persecution and noted that it does not only affect one generation but two or three generations.

He said, “To prevent something like this from happening again, this persecution must stop. As long as you keep up your effort, everyone who knows the truth will speak out in the near future.”