(Minghui.org) During a parliamentary debate on April 5, the nine parties that comprise the Danish Parliament (Folketing) discussed China's persecution of Falun Gong and forced organ harvesting from Falun Gong practitioners and other prisoners of conscience. Members of parliament opposed the unethical practice and agreed to consider human rights issues in future trade and economic cooperation with China.

Back in February, several parliament members from the Danish People's Party asked Anders Samuelsen, Minister for Foreign Affairs, about the government's position regarding the suppression of Falun Gong in China, especially organ harvesting from living practitioners in China.

The Danish People's Party had previously asked the Cabinet of Denmark about the issue and discussed it. This is the first parliamentary hearing that has highlighted the human rights abuse against Falun Gong practitioners in China. 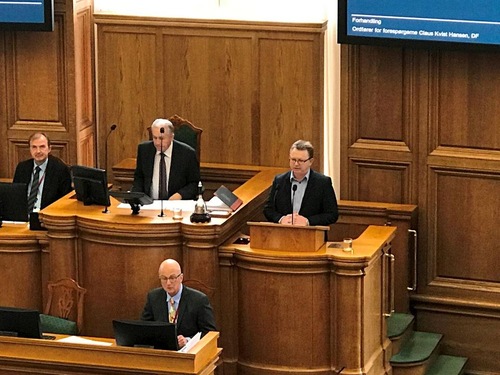 Claus Kvist Hansen from the People's Party, the second largest party in parliament, said that today's discussion was different from normal topics debated in the parliament because it involved the detention of random people by regimes and dictatorships, as well as the torture and killing of civilians. “The fact that people seem to be subjected to systematic imprisonment, subsequent medical investigations followed by execution, to eventually being cut up and having selected organs sold to the highest bidder is simply so incomprehensible that I really lack words. And apparently that's happening in China.” He said that such crimes are happening to practitioners in China.

Based on his research and observation, he could not find anything suspicious or socially undermining about the spiritual practice. “Yesterday I visited a few Falun Gong representatives and could tell that Falun Gong practitioners are generally healthier people because they neither smoke tobacco nor drink alcohol. Imagine if it is true that people in China are selected as slaughter cattle for use in organ trafficking based on the quality of their bodies. Again, I simply lack words!”

Hansen emphasized that it is important that democratic countries dare to focus on crimes against humanity. This is why he wanted the case to be debated in the parliament.

Freedom of Speech is One of the Core Values

Michael Aastrup Jensen, spokesperson for the Liberty Party (Venstre) on foreign affairs, said that China’s communists had already influenced internal affairs in Denmark. For example, the Royal Theater decided to cancel the Shen Yun performance simply because this art group is affiliated with Falun Gong.

“We think that from Venster's side, it is deeply, deeply shameful. And we also think it's very serious,” he continued, “In Denmark, a liberal democracy, freedom of speech is one of the core, core values. Therefore, we must also say something about that.”

“The Criticism Must Be Presented on All Occasions”

Nikolaj Villumsen from the Red-Green Alliance agreed. He said that the Danish government said it had conducted critical dialogues behind closed doors. But more efforts are needed to ensure that such dialogues result in real progress.

“It is also why it is so important to criticize the suppression that is taking place,” he added. He said that not only are Falun Gong practitioner being violently suppressed, other groups are also facing similar situations. “There is also the problem of organ harvesting,” he continued, “Denmark must clearly urge the Chinese government to respect the fundamental human rights of its people and stop the persecution. This criticism must be presented on all occasions and in all relevant forums.”

Kenneth Kristensen Berth from the Danish People's Party said he was disturbed by the situation in China. “I believe it in fact violates many people. ...the situation we are debating involves taking prisoners, stealing their bodies, causing them to die as a result, and we talk about equal dialogue. I think it is extremely difficult to have an equal dialogue with a regime that is behind that sort of thing.” He said this is an issue of conscience.

“I love China, I love Chinese culture, and I think it's a wonderful cultural country, which has unfortunately been destroyed by the regime they have, and which I do not know whether to call communist or, rather, red-fascist,” he said.

“We Need to Be Very Loud about It in This Area”

Rasmus Nordqvist from The Alternative said he would like to join the discussion because it is an important topic, “Namely the persecution of Falun Gong members, this organ harvesting which we are hearing is unfortunately still going on.”

He said that despite what the Chinese government said, “We need to be very loud about it in this area, and we will have to emphasize this criticism.” He was thankful the topic was raised because, he said, “This [crime] obviously must not happen.” 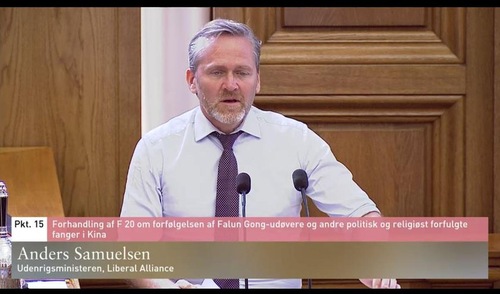 Anders Samuelsen, Minister for Foreign Affairs, spoke at the hearing.

Anders Samuelsen, Minister for Foreign Affairs, said the suppression of Falun Gong still continues. “According to human rights groups, the persecution of individual practitioners of Falun Gong continues to be monitored, and they are detained arbitrarily, arrested and judged, and subjected to physical and mental abuse. The practice of Falun Gong has been illegal in China since 1999.”

Hansen announced a joint proposal for adoption from the Danish People's Party, Red-Green Alliance, and The Alternative. He said the Parliament expresses its concern about China's elevated repression of human rights. “The parliament calls on China to respect the fundamental human rights of its people and stop the persecution of democracy activists, unionists, and national and religious minorities, including Falun Gong, Tibetans, Christians, and Uighurs.”

Hansen continued, “At the same time, the Parliament takes note of the criticisms raised by China for human rights. Regarding violent organ harvesting, we call for China to immediately stop the use of bodies from persons who have not freely registered as organ donors. The parliament calls for all cooperation between Chinese and Danish health institutions to be suspended until China has implemented transparent and credible organ transplant practices.”