(Minghui.org) The year 2018 marks the 19th year of persecution against Falun Dafa in China. Along with practitioners inside China, overseas practitioners from around the world are continuing their efforts to inform people about the benefits of Falun Dafa and raise awareness about the suppression in China.

Here in Stockholm, practitioners go to Mynttorget, a public square near the Royal Palace, every weekend. The winter temperatures are low and were recently -10C (14F) with snow. Next to a poster reading “Stop Persecuting Falun Gong,” practitioners performed group exercises along with music. Many people stopped to read the posters, talk with practitioners, and sign a petition calling for a stop to the suppression in China. 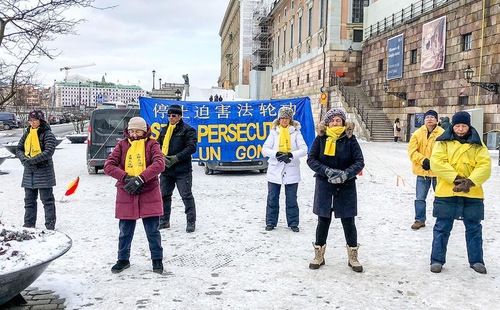 Group practice at Mynttorget, a public square in central Stockholm, Sweden, on February 24, 2018.

As one man and his mother passed by, the smiles on their faces disappeared as they read the posters. The man read each poster and pamphlet one by one, while his mother talked a long time with practitioners. A practitioner explained to them how the Communist Party defamed Falun Dafa with lies and fabricated stories. The mother and son were shocked upon hearing about the forced organ harvesting, and kept shaking their heads in disapproval. “We will be going to China this May. What you told us is very important,” the man said as he signed a petition to help practitioners. 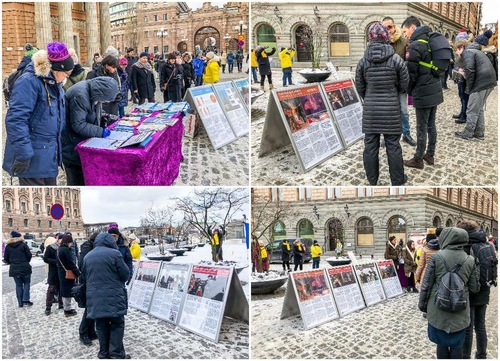 Three young men stopped and talked with the practitioners. They were happy to hear about Falun Dafa and its principles of Truthfulness-Compassion-Forbearance, and had a strong interest in Chinese culture. They were surprised after hearing about what practitioners were being subjected to for their belief in China, and signed petitions urging a stop to the tragedy. One of them said he was currently learning Chinese, and left with some materials in Chinese. 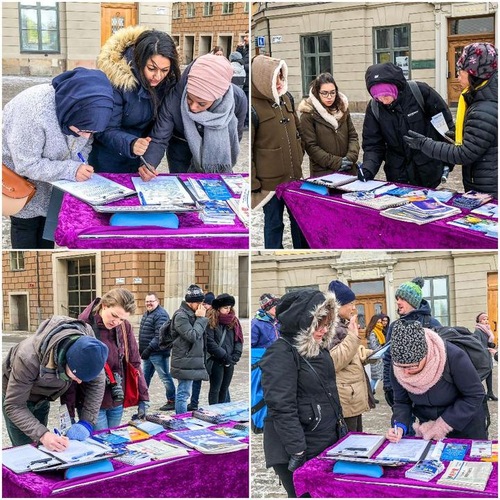 Passersby sign petitions to oppose the human rights violations against practitioners in China.

Another man who overheard the conversation had been watching the group exercise practice for a while. He said he liked the meditation a lot and signed a petition to support practitioners. Several of his friends came up, but they did not understand English. As one practitioner explained the issues for them, this man translated for his friends, who nodded in agreement. In the end, all of them were disturbed by the cruelty, and signed petitions to help end it.

A couple from Dubai said they had seen Falun Dafa practitioners in their country and were glad to see the practice again. “I could feel warmth here,” said the husband with a smile, “It must be a very good practice.” Upon hearing about the suppression in China, both signed the petition condemning the brutality in China.

“Thank you for all your hard work,” the man remarked, “You have our best wishes.”