Voice from Oceania: I Am So Fortunate to Be a Falun Dafa Practitioner

(Minghui.org) Nicholas Earle is always smiling. When people ask him why he is so happy, he replies, “So many good things have happened to me. I am not sure if I can put them into words, but I do know they are related to my practicing Falun Dafa over the past four years. That is why I feel so fortunate!”

While many people hear about Falun Dafa from friends or at fairs and public events, Nicholas's experience was different. It seemed like a total accident.

One evening in November 2013, he was, as usual, searching online for topics related to myths and ancient cultures, things he was always interested in. Somehow he landed on a website called Falun Dafa (Falundafa.org). He had never heard of it and did not know what it was. After reading the introduction, he clicked on the video link and began to watch.

“It was the video lecture by Mr. Li Hongzhi, the founder of Falun Dafa,” recalled Nicholas, “I did not sleep that night. I watched four video lectures straight through until dawn.” He stopped and left for work, then continued after returning home that the evening. He finished all nine video lectures in three days.

It was quite an interesting experience. “As I watched the lectures, I could sense from the depths of my mind that this was the truth of the universe, the truth about all the mysteries. In fact, Master Li answered every question I had ever had about life.”

From the video, Nicholas enlightened that, to truly remove any bad elements a person might have, he or she has to improve his or her character. To do that, one has to abide by the universal law of Truthfulness-Compassion-Forbearance. As he said, “To change ourselves fundamentally, we need to do it from the heart. If not, any changes will be superficial or short-lived. As we gradually assimilate to the principles of Truthfulness-Compassion-Forbearance, life gets easier and happier.”

Looking back on his past experiences and knowledge of ancient cultures, Nicholas said he thought those civilizations shared a certain common ground. But other than that, there seemed to be no deeper meanings. Falun Dafa, on the other hand, connected everything and provided him with more profound insights.

This made him very determined. “It [Falun Dafa] is something I have been dreaming of, and I will follow it for the rest of my life.”

At a farewell dinner for a friend who left Sydney for Darwin on April 25, 2014, Nicholas said to his friend, “Today I will have my last beer and last cigarette. From now on, I will be a genuine Falun Dafa practitioner.”

Following a major accident, Nicholas developed post-traumatic stress disorder and became depressed. He often attempted to overcome those negative feelings by drinking to excess. But any relief he felt was short-lived. The Falun Dafa teachings, by contrast, quickly helped him cope with anxiety, a bad temper, and other negative thoughts. His outlook improved by the day.

Shortly after that, he was hired by a big company. “Only about 1% of those who applied were hired, so I was very lucky,” he explained. He was able to purchase a house and pay for his wedding and honeymoon. Then his wife had a baby boy. He was able to get along well with everyone.

He attributed all these positive changes that happened so quickly to the blessing of Falun Dafa and his adherence to Truthfulness-Compassion-Forbearance. That is why he often shared his experiences or attended events to tell people about Falun Dafa.

“Being a practitioner means I have to live by these principles in my daily life,” he added. “I am always trying to do my best no matter where I am—at work, at home, or out and about.” 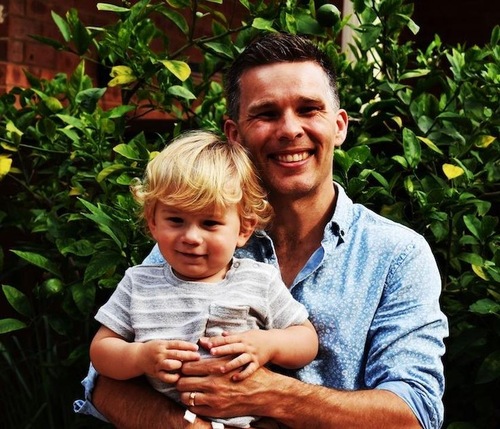 Nicholas Earle thanks Falun Dafa for giving him health and happiness.

Starting a new job always involves challenges, and Nicholas found they were opportunities to apply the principles of Truthfulness-Compassion-Forbearance. One day, he identified a safety issue during a routine inspection and documented it. This triggered a complaint from the senior technical leader responsible, but Nicholas explained the issue to him calmly.

Several days later, the technical leader cornered Nicholas. “It was a big test for me, because I am of average height and he is six feet tall. Plus, what he said and his body language were very offensive,” he recalled. Nicholas reminded himself that, as a Falun Dafa practitioner, he had to act with compassion and be rational. So he remained calm and explained clearly the consequences of ignoring that safety issue. It could mean more investigations and accountability or even legal issues. “Seeing that I was very calm and not intimidated, the technical leader got upset and left. This was indeed a difficult situation for me. Had I not practiced Falun Dafa, I can't even begin to imagine how things might have turned out,” he added.

Nicholas said Falun Dafa also taught him to be considerate of others while looking within to improve himself. “It may seem simple, but it is not easy to do,” he said.

Once, he needed to renovate his house. After obtaining a permit from the city government, he wrote a note to his neighbors that the renovation might involve some occasional noise but that he and his wife scheduled the work to avoid weekends, early mornings, and evenings so that the impact would be minimal.

Still, one of the neighbors was very unfriendly and challenged Nicholas at least three times. During that time, Nicholas was not disturbed and tried his best to accommodate his neighbor. Although he could keep himself calm most of the time, the pressure was nonetheless intense.

“From the teachings of Falun Dafa, I learned that this could happen because of some of my attachments. Once I realized this, my neighbor apologized to me when we talked the fourth time. His wife, too, apologized to my wife,” he said.

Thinking of what he had been through, Nicholas is very grateful to Falun Dafa and Master Li [Hongzhi]. “Cultivation ways have existed for thousands of years, and yet very few people know about them or follow them,” he said. “Falun Dafa is unprecedented, and this is a rare opportunity I cannot miss.”