(Minghui.org) Falun Gong practitioners in Sydney, Australia, held events at Belmore Park every Friday afternoon from October 27 to December 22, 2017, to inform the public about Falun Gong and expose the persecution of the practice in China. Their efforts were strongly supported. 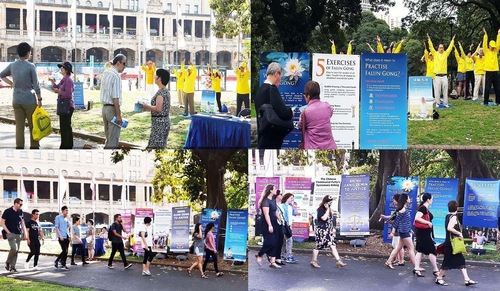 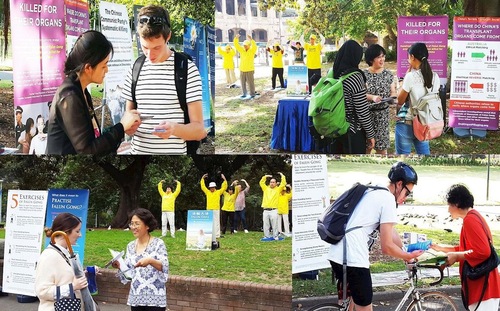 Many Chinese people support the peaceful resistance by practitioners and condemn the persecution. One Chinese gentleman said, “Falun Gong is very peaceful and benefits a lot of people. Why does the Communist Party persecute them? I will tell my friends in China that Falun Gong has spread everywhere in the world, and no one suppresses them.”

A Chinese history professor watched the practitioners' exercise demonstration for a long time. He said to a practitioner, “The history of China has been distorted by the Party. Much of what people learn is false. I knew that the Party made a lot of lies, so when the persecution first started, I looked for practitioners, and talked to them to get first-hand information. The truth is opposite of what the Party said on TV.”

“I am glad to see you guys here today. It is very peaceful. I support you. I will give lectures in China this year, and I will tell the students about the Falun Gong I see in Australia,” he said. 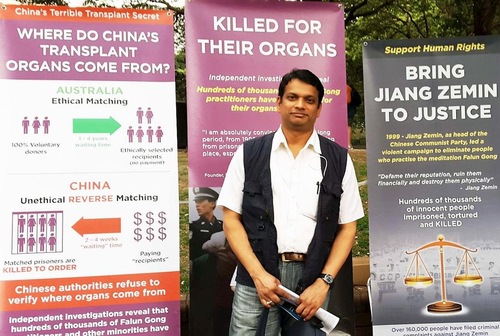 Goopi Yareed, a computer software engineer, said, “I will try my best to help Falun Gong.”

“I will try my best, and use my IT skills to help stop the persecution. I also hope you will obtain more support from the international community,” he said. 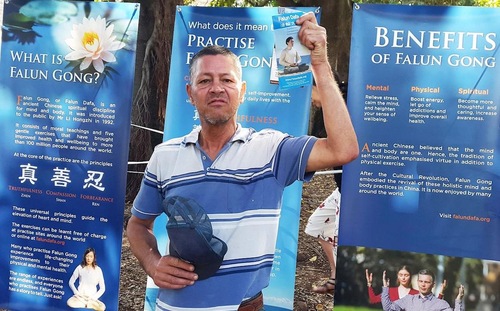 Kevin Brooks learned about the persecution three years ago. He always signs the petitions that condemn this human right crisis whenever he can. He said, “This persecution must end as soon as possible. This is so evil. I fully support Falun Gong.”

Lauren Joson, a college student majoring in international politics and relationships, talked to practitioners for a long time after signing the petition. She said her Chinese classmates often told her how good the Chinese political system is. “But after I heard about the 18-year-long persecution today, I see the Chinese system is not as good as it appears on the surface. My Chinese friends were spreading the propaganda. I will try to learn more and help to share what I learned today, which, hopefully, will help to stop the persecution.”

Anna Cryciuk tried the exercises herself. She said, “I could feel a connection to the universe right away, a feeling of peace and contentment.”

She said, “I love Chinese culture. I was shocked to hear that this peaceful exercise is banned in China. Why is the Chinese government so silly? Everybody should have freedom of belief. I hope my signature will help. And I hope more people will stand up and support Falun Gong.”