(Minghui.org) Falun Gong practitioners in Germany and France recently held events to introduce Falun Gong to the public and raise awareness of the Chinese Communist Party's (CCP) persecution of the practice.

Munich Resident: We Need to Expose the Persecution.

Falun Gong practitioners held events on Marienplatz, in Munich Germany on September 2, 2017, to expose the brutality of the CCP's persecution. They held the events in front of The New Town Hall of Munich. Many passersby paused to read the posters, watch exercise demonstration, and talk with practitioners. Many signed the petition calling for an end to the persecution. 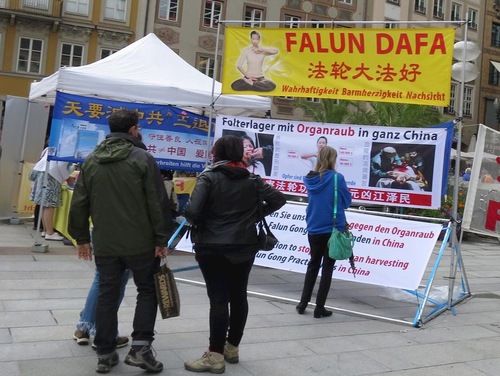 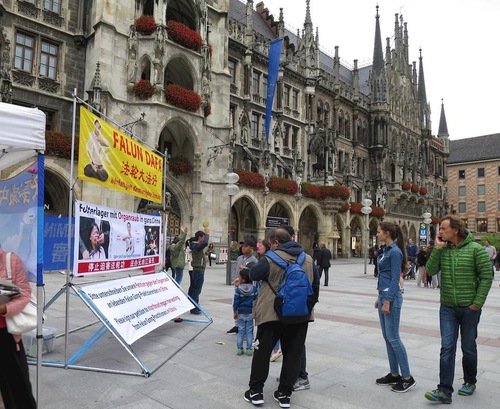 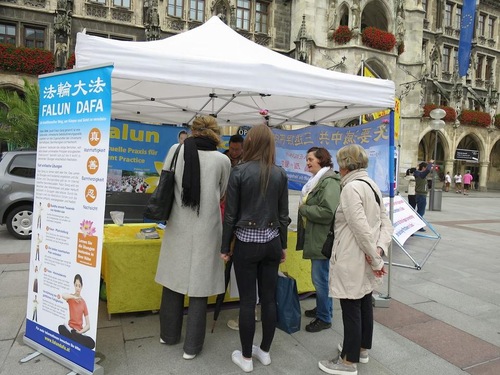 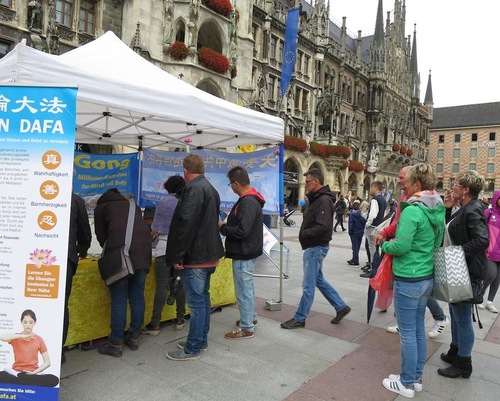 Falun Gong practitioners held an event on Marienplatz, in Munich Germany, on September 2, 2017. 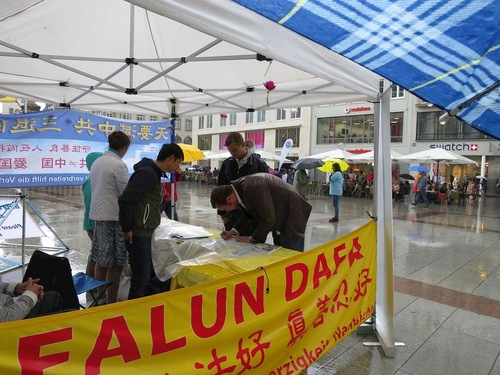 A French tourist said after signing the petition, “I think it is good for you to hold this event here. It is important. I wish you success.”

A lady brought a few of her companions to sign the petition. She said that she signed it in Sydney. One companion said while weeping, “Horrible. I must sign it right away.” 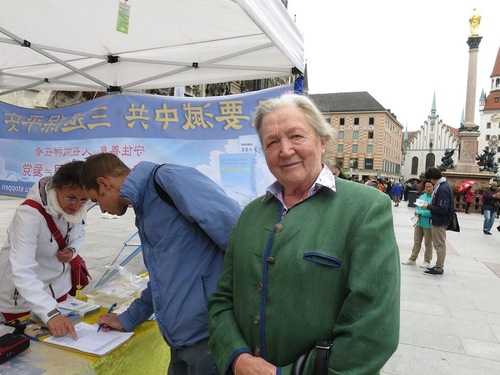 Petra Angerl, a retired merchant for a chain of clothing stores, said that the CCP's persecution was too horrible, and that the signature collection was an effective response.

Adolf Ledl, a sales manager from Austria, said that he had passed by the Falun Gong booth twice. He was busy with an appointment when he passed the first time, but he returned to the booth after meeting with his customer. He viewed the banners and signed the petition without hesitation. He said, “We must stand up and expose these crimes.”

Passerby Near Eiffel Tower: Keep Up Your Efforts

Falun Gong practitioners in Paris held events near the Eiffel Tower on Sunday, September 3, 2017, as they had on previous Sundays. Numerous tourists were in the area. The practitioners' exercise music, yellow costumes, and banners were eye-catching. 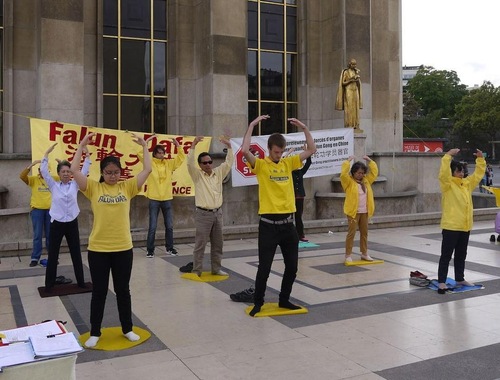 Demonstrating the Falun Gong exercises beside the Eiffel Tower. 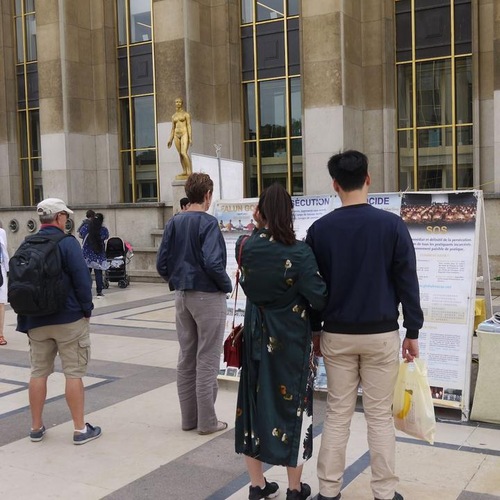 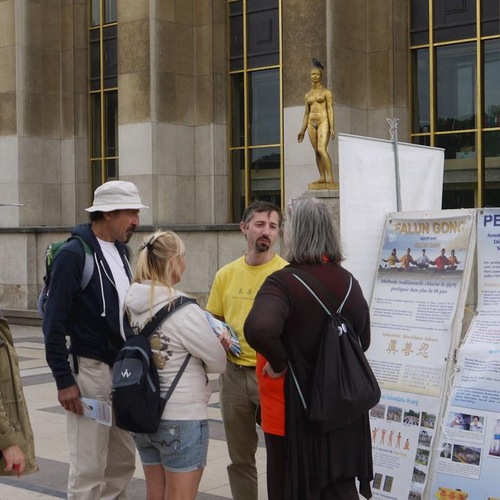 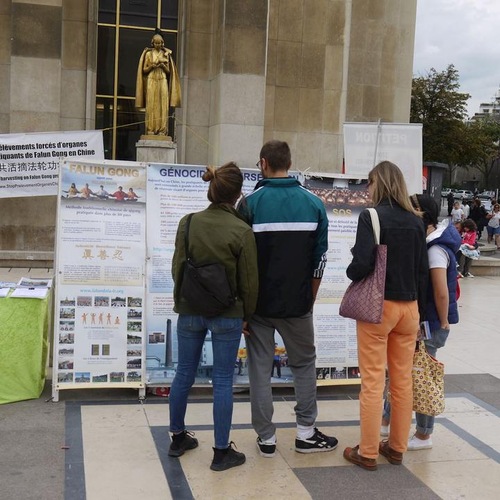 As the practitioners demonstrated the exercises, some passersby said they wanted to learn on the spot. Some asked for flyers and other informational materials. People were shocked upon hearing about the CCP's organ harvesting from living Falun Gong practitioners.

Reymond George, a tutor, said the he had seen Falun Gong practitioner marches before. He was appalled upon seeing the banners exposing the CCP's live organ harvesting. He read the poster carefully with tears in his eyes.

“This is terrible and inhumane,” said George about the live organ harvesting, “I thought it was impossible initially. Now I know it is true. It is horrible to make people suffer such agony. It’s hard to face such reality. It is too horrible. I am speechless.” 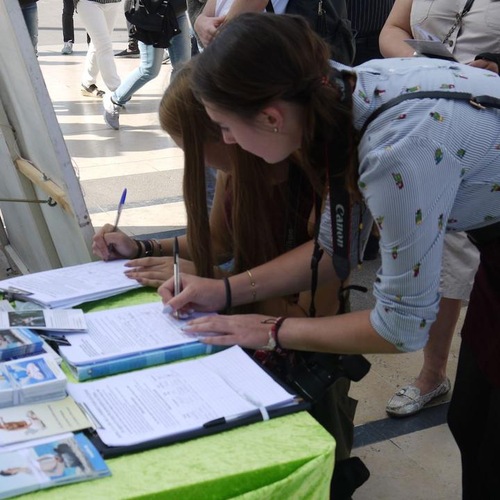 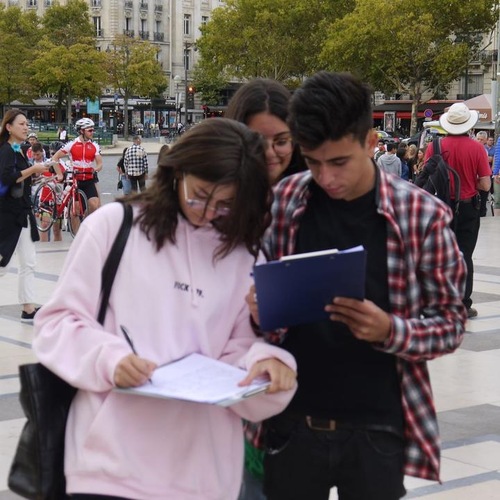 Signing the petition calling for ending the persecution.

Kantemir, a Turkish student majoring in social economics, said, “There are many persecution and crimes against humanity in this world. I am against any persecution. I stand with you and the victims of persecution.”

Cathie Paralle, a physical education teacher, said, “Truthfulness-Compassion-Forbearance is a true art in life. Falun Gong is a way of cultivation to become better people. The persecution in China is completely wrong and unfair. I hope the persecution will stop as soon as possible.”

Falun Gong was made public in 1992, and soon spread across China due to its beneficial effect on health improvement and morality. Nearly 100 million people practiced it by 1999. Out of jealousy, and paranoid of losing control of the people, Jiang Zemin, former head of the Chinese Communist Party (CCP), initiated the persecution of Falun Gong on July 20, 1999.

The CCP even conducts state-sanctioned live organ harvesting for profit. Due to the CCP's information censorship, the exact number of practitioners who have died in the persecution is not known.

Related article in Chinese:Public Encouragement Beside the Eiffel Tower