One Woman's Story: I Found Falun Gong After a Lifetime Exploring Other Spiritual Paths

(Minghui.org) Eva Marie practiced a spiritual school that originated in Japan for many years, and even taught it. One day in 1997, while she was sitting in meditation, a thought clearly appeared in her mind: “What are you doing? There is another way to connect to God.” Eva Marie felt that this message was true, so she decided to give up her long-practiced spiritual school. 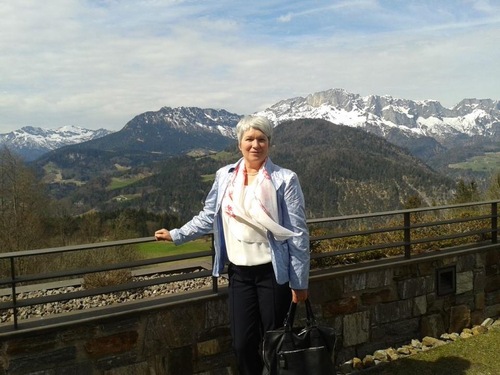 She invited all her students and told them sincerely that she would not practice that spiritual school any longer as she no longer believed it to be a correct path. Her primary source of income came to an abrupt halt as a result.

Looking back to this time 20 years ago, she said, “I stopped all spiritual practices, and all my income ceased. I did not know where the correct path was or what to do next. I felt I had nothing and nowhere to go.”

Eva Marie was born on a farm near Cologne, Germany and grew up in a very traditional Catholic family. She went to church every Sunday as a child. Religious life may be a habit for adults, but she noted that it can be a burden for children.

Eva Marie said, “For me, religion means discipline, punishment, death, and fear. Of course there is a little love. But more is enduring pain. I did not feel compassion. In church, I felt many things were not right: preaching one way and doing things in another way.”

Though she had some resistance, and in her mind kept a distance from the religious discipline and formality, she believed in the existence of God. She said, “My mother believed in Saint Mary. She would light a candle and pray for help when facing extreme difficulties. She let me feel that God gives us direction. Believing in God is essential in all issues. This influenced me a lot.”

Seeking a Way to God

She thought to make a living after graduation through psychological counseling and therapy. In addition, she wanted to become a spiritual teacher. She realized that, “Science cannot explain all things. Psychology is a new science, and like other disciplines, can only solve our issues at a certain level.”

Thus, she tried various spiritual schools, one after another, seeking the higher level of wisdom that science cannot offer, while learning psychology at the same time. She said, “I deeply believed that there was something between heaven and earth. What we have is not only our body. Spirit truly exists. But I had not found a way to connect with it.”

Eva Marie did not finish her coursework until she was 37 years old. She remained determined to seek a way to connect with high-level life.

After Eva Marie graduated, she started a training center on business relations and communication. In the fall of 1998, she and another psychologist went to participate in a training class. They noticed that the classroom was locked from inside during lunch break. She was told that the event organizer practiced Falun Gong inside.

“What is Falun Gong?” she asked. The organizer showed her the exercises and gave her some Falun Gong books.

At home that night, Eva Marie put her three-old son to bed and took out the book Zhuan Falun to read. She recalled, “I had tears when I read several sections. I was shocked. This book tells all heavenly secrets. It is a true revelation!”

She finished reading the book within two days. She was especially touched with a few lectures in the book, such as spirit possession. She said, “I understood that many people's so-called energy was actually from bad things in the other dimension.

“All that I learned before was to test whether I could tell right from wrong. I enlightened that I had experienced the spiritual ways I practiced in several previous lives. It was a test for me whether I had the determination to practice Dafa. I cried when I realized this.”

She continued, “After reading this book, I enlightened that Master directed me in my life and took care of me. Master teaches us that he removes the bad things from us. I said in my mind, 'I am following the correct path now! All I have experienced until now was a test and in preparation for today.”

The Chinese Communist Party (CCP) initiated the brutal persecution of Falun Gong in July 1999. Eva Marie and other Falun Gong practitioners in Germany have worked together to organize various events to raise awareness about the persecution in public and with government and nongovernment organizations.

Eva Marie said, “I treasure practicing Falun Gong. I will use all I have to expose the persecution until it stops. No power can stop me. I will continue my effort to introduce Falun Gong to the public and raise awareness about the persecution to help bring it to an end.”