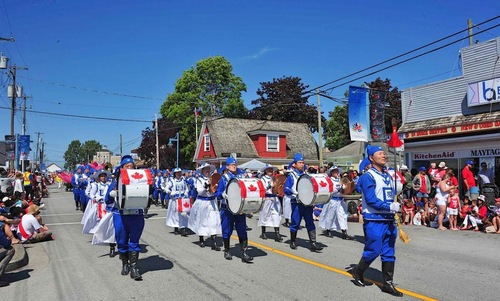 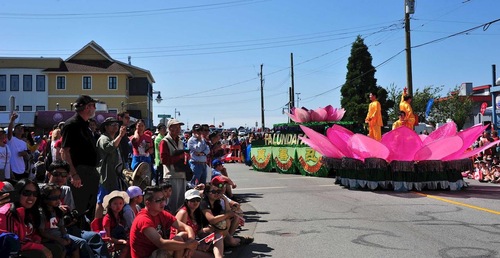 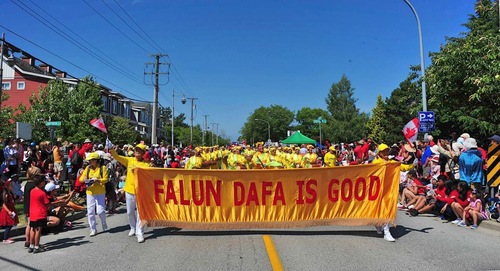 Jeff Wock from Richmond said he liked today's parade for its multiculturalism, which made him proud of Canada. He said he knows about Falun Gong very well, having seen practitioners at past public events.

“This is a free country. People can freely practice their belief. Falun Gong practitioners can enjoy the freedom here. We are all Canadians,” Jeff said.

Steve Carter, an air force officer, said he also liked the Falun Gong performances. “They [Falun Gong practitioners] come to the parade every year,” Steve said. “They are part of Canada.”

Bob Carwen was also happy to see the Chinese culture displayed by the Falun Gong group. “They are part of our community. I thank them for the joy they brought through the performances.”

“So many people practice Falun Gong here!” one lady shouted. She called her friends who were shopping in a store to come out and see the practitioners' performances.

Another Chinese gentleman recorded video of the entire Falun Gong group and then did the same from the opposite side of the street. “This is a must-see. I will show this to my friends in China,” he said.

An elderly Chinese couple took many photos of practitioners. The husband said, “I could not imagine there are so many Falun Gong.” His wife echoed, “It is impossible to see in China. They have freedom here!” The couple said they would take some Falun Gong flyers back to China for their friends.