(Minghui.org) During the recent Almedalen Week, considered the most important forum in Swedish politics, practitioners introduced to the public the persecution of Falun Gong in China at a rally on Visby Central Square on July 5, 2017. An interview by Sveriges Radio followed on July 6.

Held in week 27 of each year in the city of Visby, Almedalen Week includes speeches, seminars, and other political activities. 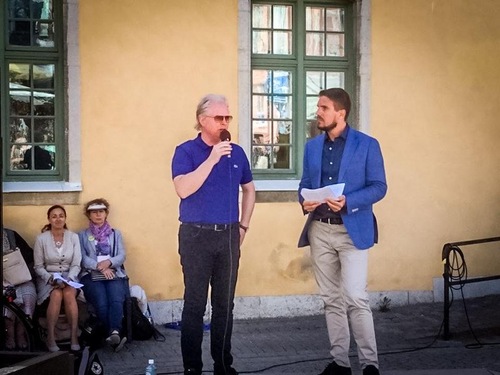 MP Hans Rothenberg (left) and practitioner Tobias (right) introduced Falun Gong to the audience during a public rally on July 5, 2017.

MP Hans Rothenberg and practitioner Tobias talked about Falun Gong and the suppression in China during a rally at Visby Central Square on July 5. Many people asked questions and were interested in learning more.

The popularity of the practice in China, however, was viewed as a threat by the Communist Party, which banned the practice in 1999. Tobias said, “Since then, massive defamatory propaganda was launched in China to attack Falun Gong. And many practitioners were arrested for their belief.”

Among various atrocities practitioners in China are subjected to, one of the worst is forced organ harvesting. Tobias continued, “One report in 2006 confirmed the organ harvesting from living practitioners was supported by the Chinese government. And it took place with the collaboration between prisons and military hospitals.” 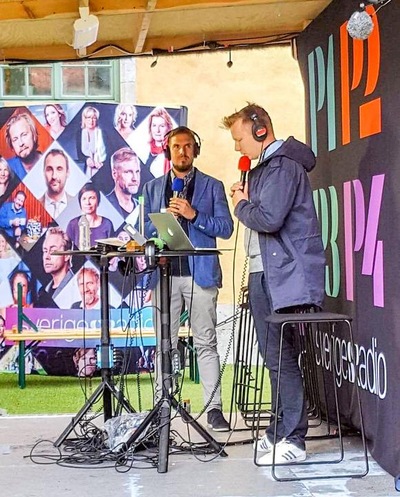 The program host of Sveriges Radio said he had read about the organ harvesting on CNN, and in Dagens Nyheter, a major Swedish newspaper. He asked if there had been more news coverage.

Tobias said that multiple investigations and reports have provided in-depth coverage of the brutality. For example, Bloody Harvest: Organ Harvesting of Falun Gong Practitioners in China by David Matas and David Kilgour was published in 2009, and additional reports indicated that at least 600 hospitals were involved in the forced organ harvesting.