Germany: Raising Awareness of the Persecution and Organ Harvesting in China in the Town of Trier

(Minghui.org) Tourists and passersby in the town of Trier recently had a chance to learn about the brutal persecution of Falun Gong in China and in particular about organ harvesting atrocities.

Falun Gong practitioners from Rhineland-Palatinate, Saarland, and Baden-Württemberg held an event there on April 22.

Trier, which was founded more than 2000 years ago, claims to be the oldest city in Germany. There are many Roman monuments in this city, which is also the birthplace of Karl Marx. Tourists from different countries like to visit Trier, and practitioners spoke to them as well as to the townspeople. 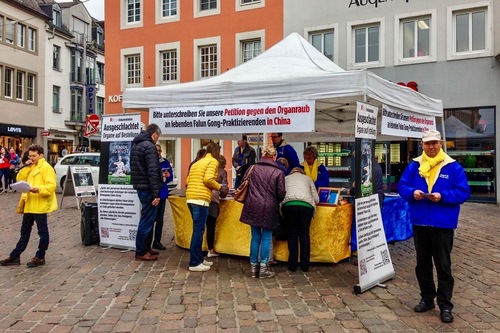 Locals and tourists in Trier learn about the persecution of Falun Gong.

After signing a petition in support of Falun Gong, one lady said, “Organ harvesting is just terrible. It is good that there are still people like you, who stir us up.”

A member of Trier city council wanted to know what Falun Gong is and why practitioners were being persecuted and killed.

One woman signed the petition right away, but her husband seemed reluctant and was about to leave. His wife encouraged him until he signed, too. After that, his attitude changed, and they expressed their appreciation.

One woman said, “It is great that you do this […] It takes courageous people like you to go out and inform the public about something like this.”

Another couple signed the petition and then learned that some countries had already passed laws against forced organ harvesting. They said, “Thank you for your commitment. It is not right that people have to die and that the organ recipients go back to their country to be treated there.” In their opinion, laws that prevent health insurances from covering and doctors from treating patients who go to China to get an organ and return to their own country to be taken care of should be enforced.

A woman in the medical field, who said that she knew about the organ harvesting atrocities, commented, “Every human life is valuable. Harvesting organs like this is a crime and should not happen.”