(Minghui.org) Today's news from China includes incidents of persecution that took place in 14 cities or counties in 7 provinces. According to this report, 9 Falun Gong practitioners were subjected to mistreatment during their detention, and at least 20 were illegally arrested. 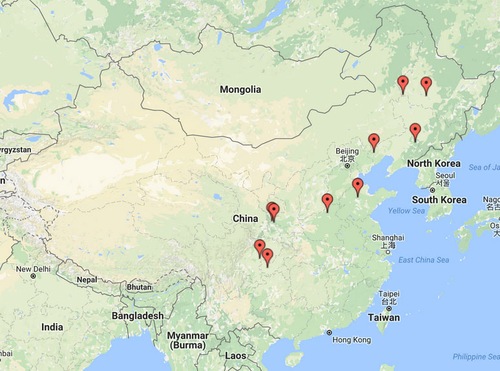 A practitioner in her 60s was arrested on the morning of April 10, 2017, by officers from Zhenjiangsi Police Station when she was telling others about the persecution of Falun Gong.

Ms. Liu Xiurong and Mr. Zhao Hongwei were arrested on March 16, 2017, by officers from Huangshan Police Station. Their homes were ransacked. Ms. Liu was released the same day. Mr. Zhao was held at Binzhou Detention Center.

Ms. Zhao Liya and Ms. Sun Chunhua are imprisoned in Xinxiang Women's Prison. Their families noticed that they both had similar mental irregularities during visits last month. They suspected that they might have been given mind-altering drugs.

Mr. Xiong Dejun and Mr. Zhang Degui from Yunyang County were arrested on April 10, 2017, while they were distributing Falun Gong materials in Quma Township.

Mr. Du Hongyuan was arrested in April, 2016. He was sentenced to a three-year-term in November 2016. He was transferred to Weinan Prison at the end of February 2017. His family was not informed.

Mr. Yang Rong was sentenced to 18 months in prison.

Mr. Huang Licheng and seven other practitioners from Lanxi County were arrested on January 5, 2017, by Changjiang Township Police Station officers. Villager Li Sheng reported them to the authorities while they were distributing Falun Gong materials in Changjiang Township. Mr. Huang has been held at the Lanxi County Detention Center. The others were released.

Mr. Fu Chuan jumped out from his second floor office window to flee from officers trying to arrest him on March 29, 2017. He has been in hiding ever since.

A married couple was each sentenced to 10 years in prison for refusing to renounce Falun Gong. Their appeal has been denied, and Mr. Cao Yuguang is serving time in Shandong First Prison, while his wife, Ms. Li Qin, is incarcerated in Shandong Province Women's Prison.

Mr. Cao's lawyer recently tried to visit him but was denied a meeting with his client. The prison authorities claimed that the power of attorney was signed before Mr. Cao was admitted to prison and thus didn't count. The lawyer must get a new power of attorney signed by his client, who is only allowed a visitor once per month.

Ms. Luo Chunrong, 68, has been sentenced to two years in prison for telling people about the persecution of Falun Gong. Her family was informed of her conviction in early April 2017.

Ms. Luo had been repeatedly arrested for her faith since the persecution began in 1999. Her latest arrest took place on March 31, 2016, and she has been detained ever since.

Ms. Luo Shuizhen, 62, has been sentenced to four years in prison and fined 10,000 yuan for refusing to renounce Falun Gong.

Her lawyer, who was barred from attending her trial in September 2016, didn't learn about the verdict until he received the court notice on March 29, 2017.

This is not the first time that Ms. Luo has been targeted for her faith. Prior to her latest imprisonment, she had spent a sum of 13 years in different detention facilities.

Mr. Li Shaochen, 73, has been detained in the Hongqiao District Detention Center since December 2016.

Ms. Xia Shufang was arrested on January 2, 2017, by officers from the Taishitun Police Station. She has been held in Miyun Detention Center until now.

150 local people signed a petition to request her release in February 2017. 407 more people offered their support to Ms. Xia by signing the petition in April.

It was said that the officers arrested Ms. Xia in order to earn an “Excellent Community Police Branch” award. Many people were very upset by what the local police did.

Ms. Zhong Weiling, 64, filed an appeal on December 26, 2016, after being sentenced to three years of imprisonment. Lianyungang Intermediate Court returned her case to the procuratorate at the end of March 2017 for retrial.

Ms. Zhong is emaciated and near death as a result of torture.

Ms. Xiong Meiying was arrested on September 23, 2016, for talking to people about Falun Gong. The Xinjian District Court tried her on the morning of November 28. Her family received a notification on April 11, 2017, stating that she had been sentenced to 3.5 years of imprisonment and that the verdict had been delivered to her.