(Minghui.org) May 13, 2017, marks the 25th anniversary of Falun Dafa's introduction to the public and the 18th annual World Falun Dafa Day. Approximately 10,000 Falun Gong practitioners from across the globe gathered in New York to take part in a number of events to celebrate this major milestone. A grand parade was held in Manhattan on May 12. 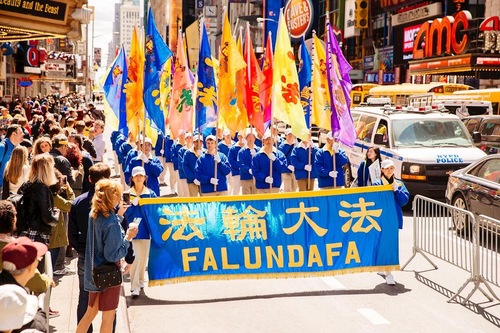 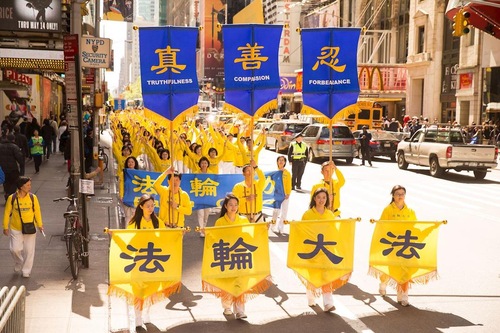 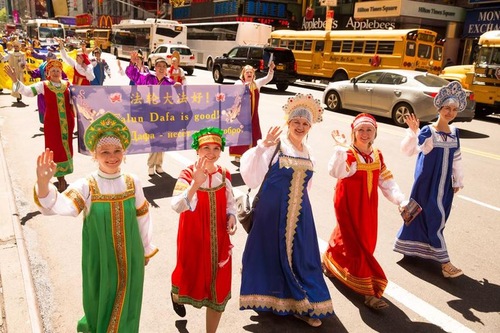 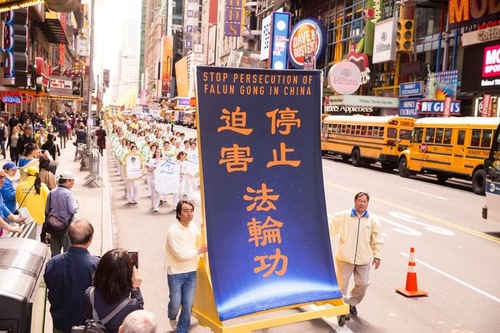 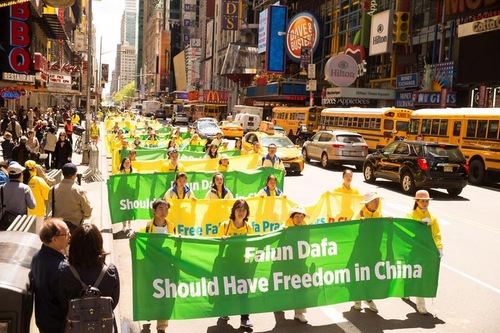 The parade started from Dag Hammarskjöld Plaza near the United Nations headquarters, marched through midtown-Manhattan, passed by Grand Central Terminal and Bryant Park, and terminated at the Chinese General Consulate. The parade started at 9:30 a.m. and last for four hours. The route was about two miles in length.

New York Police Officer: Everyone Should Have Falun Dafa! 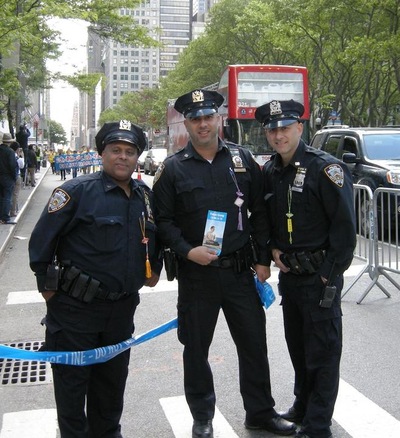 Writer: The World Needs Such People 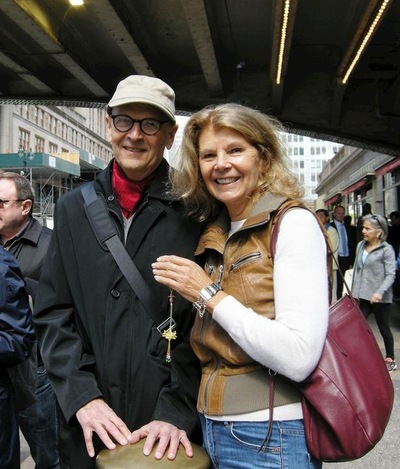 Writer Erla and her friend Teder from Norway watch the parade.

Writer Erla was born in Norway and now makes her home in New York. She watched the parade with her friend Teder. Erla said that she very much enjoyed the music accompanying the parade. She added that it was great to see so many people from different countries taking part. She admired the practitioners' perseverance in striving to live by Dafa's principles of Truthfulness, Compassion, and Forbearance, and added that she wished that leaders of all countries would follow the principle.

Erla said she knew about the persecution of Falun Gong in China, and she felt it incredible that such a thing could occur nowadays. She said that other countries should help stop the persecution, and that the United Nations should do more in this regard as well.

“Such a group of good people. You can see from the parade how peaceful and kind they are. This society needs them. This world needs people with such a belief. I am grateful to see you here today,” said Erla.

“Look at their exercise demonstration, the hand gestures are so nice. They make one feel bright. They give people a feeling of brightness and hope in the darkness,” added Erla.

Her friend Teder agreed, “This parade is so enjoyable. I am moved. I'm involved in human rights work and I know about the brutality of the persecution in China. I know they suffer live organ harvesting [by the authorities] in China. This event today is good, to have more people know about the issue.” 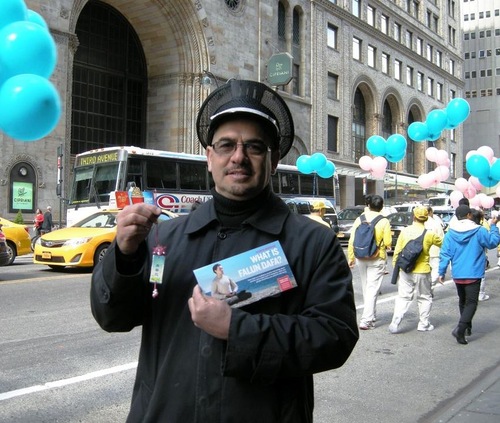 Ray, head of security at a major hotel, holds a hand-made lotus flower and a Falun Gong flyer.

Ray is head of security for a luxury hotel. He said, “Very nice parade. I have watched it every year for several years. The parade every year is very moving. This allows everyone to gather and allows people to know what Falun Gong is, and what is happening in the world and in China. I wish that more people would join them against the persecution. For all these years, I can't understand why they suffer persecution in China. I support them as they keep up their efforts [to expose and end the persecution]. One day freedom will prevail across the world, including China.” 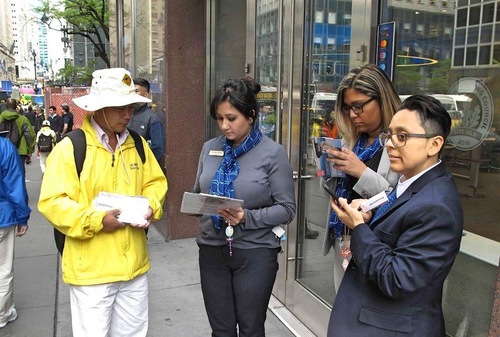 Several bank employees watched the parade from the sidewalk in front of their bank. They signed a petition against the CCP's live organ harvesting. 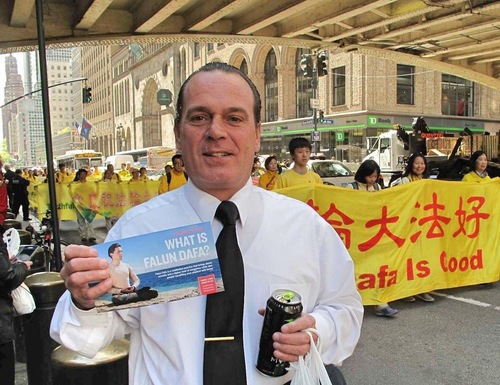 George, who works in a luxury hotel, enjoyed the parade. 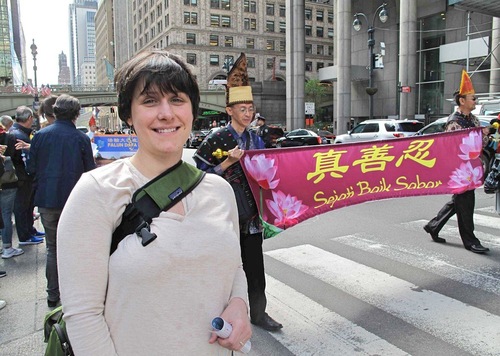 Councilor Katie saw with the parade and exclaimed, “Falun Dafa is practiced across the world!” 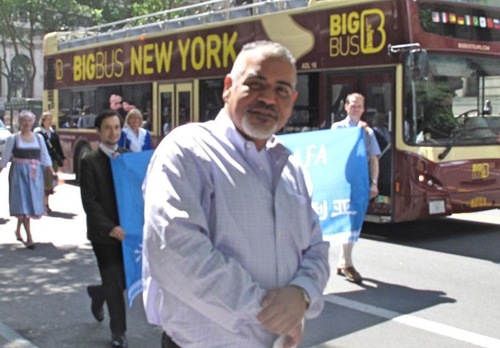 Ramon said he wished that more people would learn to live according to Truthfulness-Compassion-Forbearance.

James Blake, a professor at the City University of New York, stopped to observe the parade with his wife. He said he hadn't previously been aware of Falun Dafa or the persecution in China. “You don’t hear about this in the news,” he said. “There isn’t a daily briefing on CNN or anything like that.”

Professor Blake added, “I think it’s a very powerful parade in many respects. It certainly sends a message about what’s happening to people outside of this country.”

“It’s very peaceful, and has a quiet strength to it,” he added. 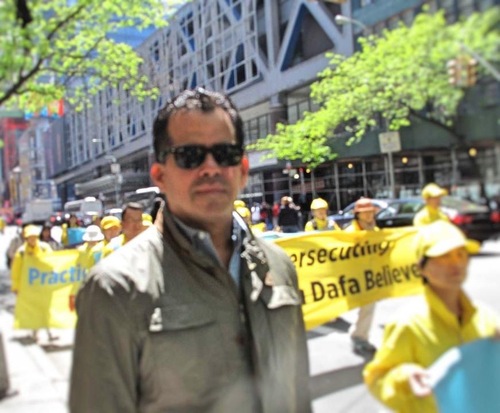 New York reporter Jorge watched the parade and said he appreciated how it raised awareness about Falun Dafa and the persecution in China. 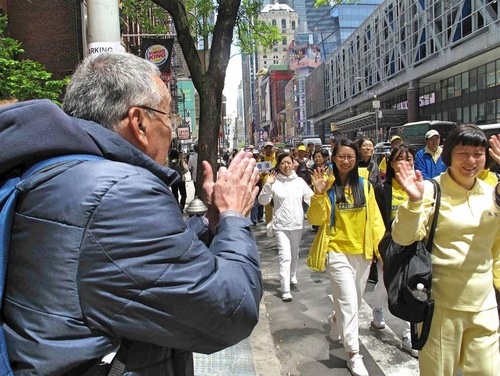 An elderly man applauded the parade as it approached the terminus. He immigrated to the U.S. more than 20 years ago, and now lives in New York. He said, “The happiest day of my life is to applaud them here. We need to applaud each participant. This is the nicest day I have ever experienced because I see so many people doing a righteous thing. But people in the world are living in a maze. I am grateful for this beautiful day.” His eyes were filled with tears as he spoke.

He continued, “They come from other places. They are doing good for others unconditionally. This, to me, is so nice. We New Yorkers should do this too, to help others and remind others of the truth of the world.”

A Chinese man named Lin Fan (alias) has been a resident of New York for more than 40 years. He gave the thumbs up and said, “I support Falun Gong. They are great. I love my country and hometown. But I don't believe in the Communist Party. Everyone should follow the principles of Truthfulness-Compassion-Forbearance. I know Falun Gong well, including the April 25 appeal in Beijing in 1999.

“I have been paying attention to each event held by Falun Gong. It is wrong for the Communist Party to persecute Falun Gong. Everyone should have their own belief. You can disagree, but you cannot suppress. A life, no matter how poor or rich, should be respected. It is cruel to harvest a vital organ from a living person. This is unimaginable. Heaven does not allow this. I am very sympathetic toward Falun Gong practitioners and support them.”

Tourists Moved by the Parade 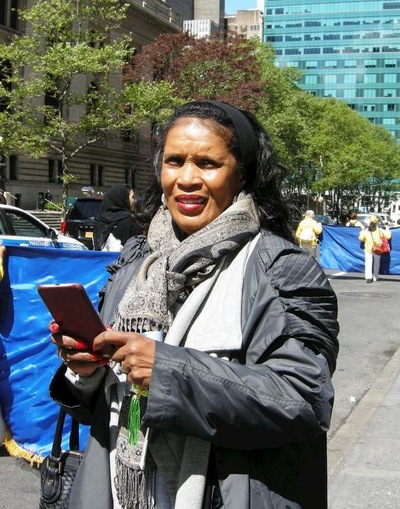 Vanessa, a city planner in Washington DC, watches the parade. She said she felt a sense of peace and calm from watching it. She was happy to see so many people from different countries and races celebrate the special day. 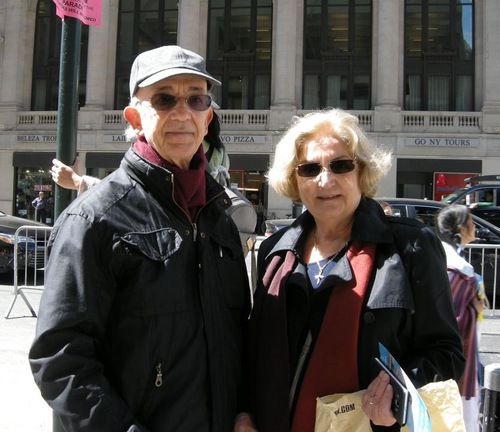 Tourist Edison and his wife Melisa from Brazil. Edison said he was very moved by the parade.

Edison said, “I am a person who is easily moved. When I watched the parade, I was moved almost to tears. I see such nice and kind practitioners. I congratulate them. Such a special day, with so many people to celebrate. It is splendid. I will browse the internet to learn more.”

His wife Melisa added, “I saw the contingent from South America. I am really happy to see the parade today.” 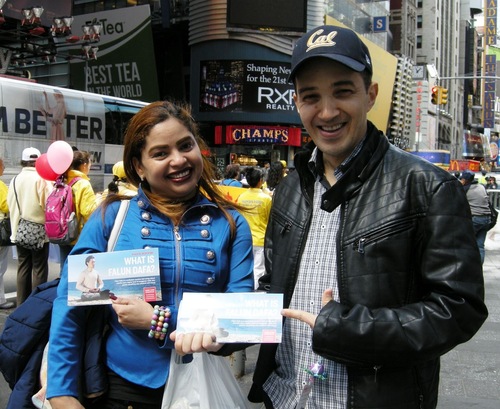 Halim (right) from the Middle East said, “I am very fortunate to see the parade today.”

“I think this parade is so beautiful,” said Erle Bjornstad, a waitress and actress from Connecticut who saw the parade on 42nd Street. “It’s so nice. It’s so sweet and gentle. And people are smiling. And the colors are pastel and lovely.”

Silvia Bonome, a tourist from Montreal, was struck by the banners carried by practitioners that referenced the persecution and the Chinese regime’s state-sanctioned organ harvesting from living Falun Gong practitioners. “It made me reflect, made me think on how it is we can help,” she said.

A Chinese tourist, Chen from Beijing said after watching the parade, “I am touched. So many people. It is magnificent.” He said he'd seen a Falun Gong march in Flushing and knew about the persecution in China.

Chen said, “I think the persecution is wrong. There should be freedom of belief. This indicates that China is an authoritarian country.”

Another Chinese tourist, Li from Jiangsu, said about the parade, “Freedom. There is freedom here. But in China [such a parade] cannot be held. It is wrong for China to control so tightly.” He felt that Falun Gong practitioners were kind people.

Li said, “Falun Gong has spread across the world. This is good for China. I am proud that traditional Chinese culture is promoted in the world.”