(Minghui.org) Falun Gong practitioners from Hong Kong and other areas in Asia held a rally and a march together with supporters on April 23, 2017, commemorating the 18th anniversary of the April 25 demonstration.

On April 25, 1999, 10,000 practitioners gathered peacefully in Beijing to appeal to the central government for the release of 50 arrested practitioners in Tianjin. Zhu Rongji, then-Premier of China, met with practitioners and agreed to release those arrested in Tianjin. However, Communist Party leader Jiang Zemin banned Falun Dafa three months later in July and started a brutal nationwide persecution that continues to the present day.

In addition, the event called for the prosecution of Jiang Zemin and supported Chinese citizens who have withdrawn their memberships in the Chinese Communist Party (CCP). 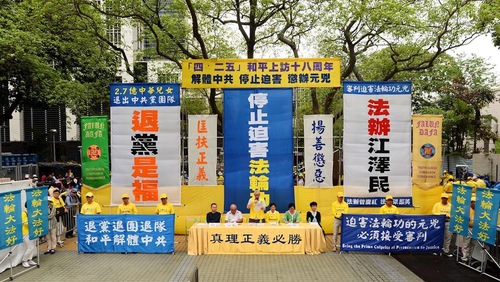 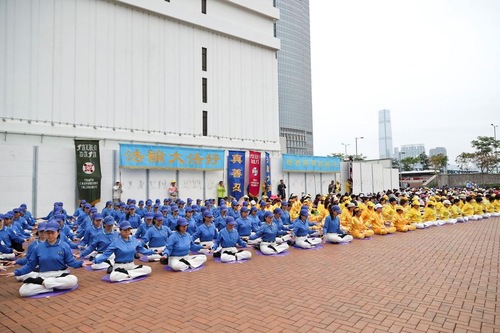 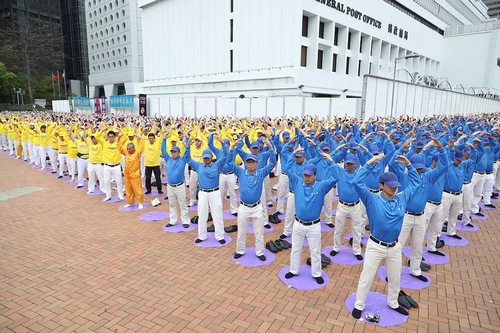 Practitioners held a group exercise demonstration in the morning at Edinburgh Place in Central, followed by a rally at North Point King's Road Playground. Politicians and activists gave speeches or sent audio greetings to the rally, expressing their support for practitioners' continued peaceful resistance.

Legislative Council Members: “It is the responsibility of every Chinese to end the persecution of Falun Gong”

Three Legislative Council members sent audio recordings of their speeches. They all called for the end of the 18-year long persecution in mainland China.

Lam Cheuk-ting (Democrat) emphasized that everyone in a modern society should have the freedom of belief.

Leung Yiu-chung of the Neighborhood and Worker's Service Center condemned the Chinese regime's state-sanctioned killing of practitioners and taking their organs for transplants. He pointed out that it is the responsibility of every Chinese to end the persecution of Falun Gong.

Three former lawmakers, Tsang Kin-shing, Lam Won-yian, and Chen Shu-ying, spoke at the forum. Tsang condemned the communist regime's inciting local bullies to harass Falun Gong in Hong Kong. He wishes that all Chinese will be able to enjoy the blessings of “Truthfulness-Compassion-Forbearance” in the near future.

Lam Won-yian said that persecuting Falun Gong will backfire on the Communist Party, as it will make more people see clearly the evilness of the Party and thus abandon it.

Bao Tong, the secretary of the former communist leader Zhao Ziyang, praised the peacefulness of the original April 25 demonstration in an audio recording. He said that the spirit needs to be promoted in China instead of being suppressed.

Bao Tong also said, “Jiang [Zemin] should be brought to justice. The lawsuits based on solid evidence are commendable,” Bao said, referring to the 200,000 criminal complaints Falun Gong practitioners and their family members have filed against the former Chinese leader for directing the persecution.

Han Lianshan, the spokesman of Defend Hong Kong Freedom, called upon the Chinese to recognize the evil nature of the Communist Party in his speech. Han also expressed support for the 270 million who have quit the Party.

Jian Hongzhang, the spokesman of the Falun Dafa Association in Hong Kong, called for the restoration of traditional Chinese values and morality in China. 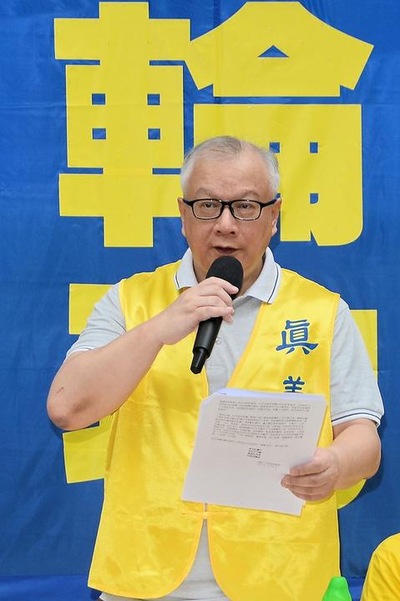 Jian Hongzhang called for an end to the persecution and for bringing Jiang Zemin and his subordinates to justice.

About 1,200 practitioners participated in a march after the rally, which departed the King Road Playground and ended at the Liaison Office of the Central Government in Hong Kong. 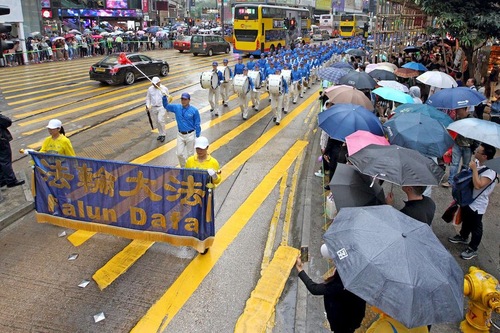 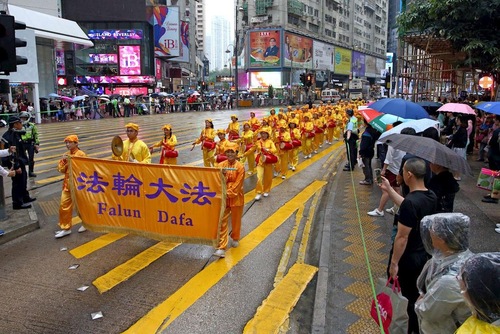 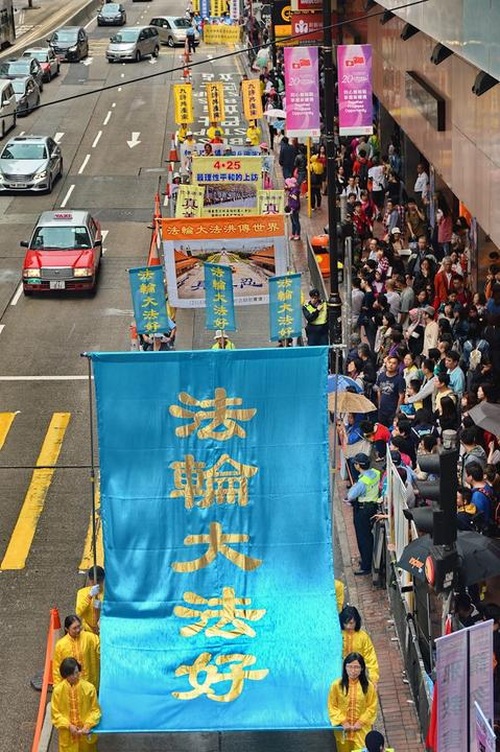 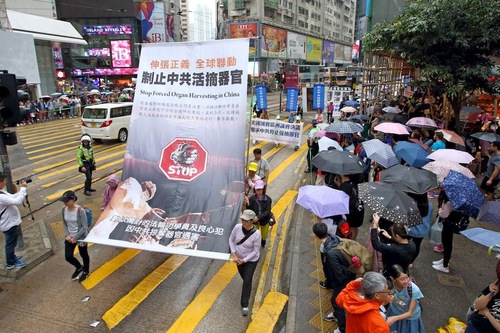 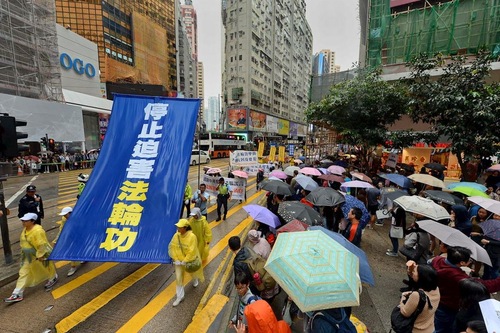 “Stop the persecution of Falun Gong” 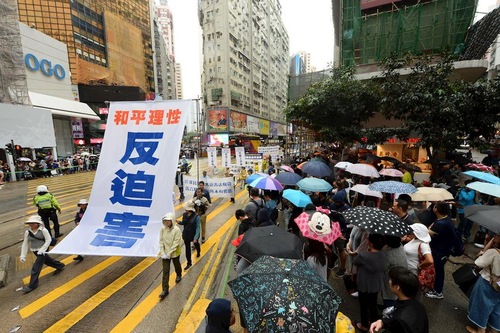 “Peaceful resistance against the persecution” 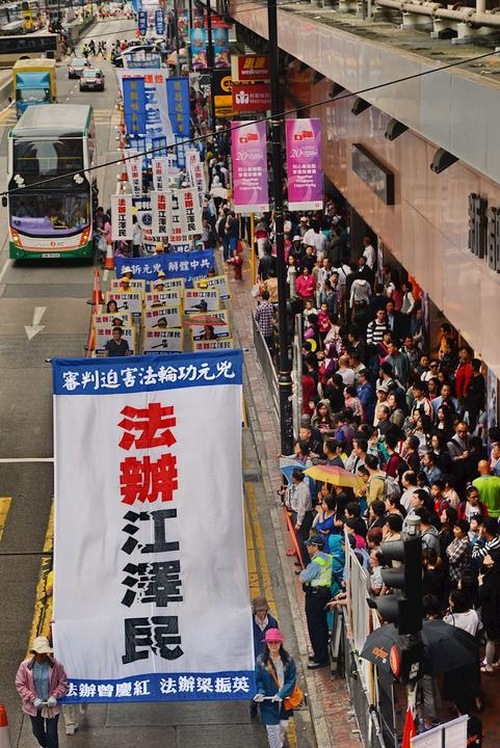 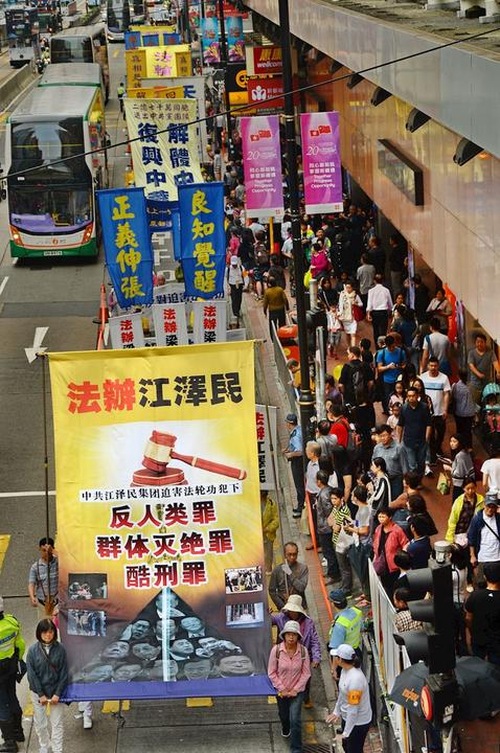 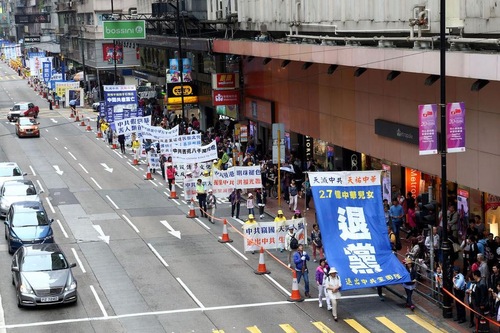 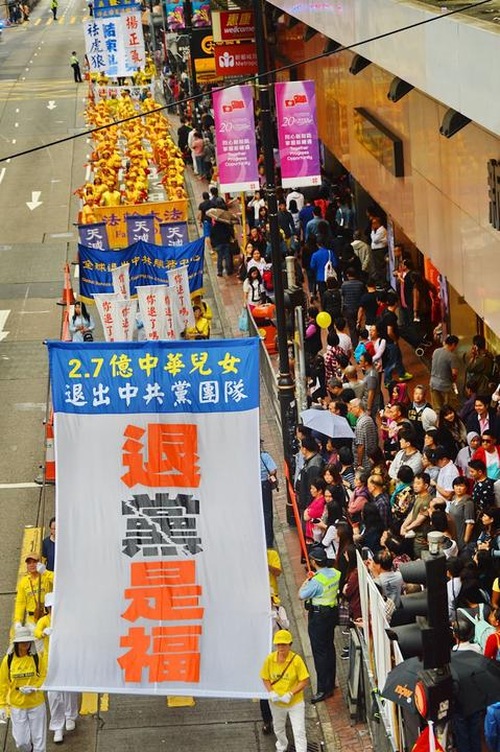 Crowds of Chinese tourists watched the parade and took photos and videos.

Shouts of “magnificent!” and “shocking!” were heard from a group of tourists from Guangzhou.

“This is my first time seeing Falun Gong. This is truly a free land here,” a young man from Gansu said. “My friends and I believe people should have freedom of belief. I will show the photos I took today to my friends back in China.”

Ms. Deng from Chengdu, Sichuan was touched by the march. “I believe Falun Gong's principles of Truthfulness-Compassion-Forbearance are beneficial to society. I will tell my friends in China what I saw today.”

“I come to see the Falun Gong march every time. I want to show my support. Their spirit agrees with the traditional Chinese values, which, however, has been destroyed by the communist party,” Ms. Li said.

“The Communist Party has always been cruel,” Ms. Li said, who lived in China during her childhood. “Not only do they persecute Falun Gong, but they have also killed many innocent Chinese. It must be disintegrated. Heaven will eliminate it.”