(Minghui.org) Oxana Draguta is an ordinary woman who lives in Eastern Europe. However, she had been nearing the age of thirty, and was still single – this worried her greatly. She once asked God for help to soon find her a husband; otherwise, she'd give up.

Whether by fate or by chance, she found her future husband in the time period she had set. At that time she also found the meaning of life that she had been searching for all this time. 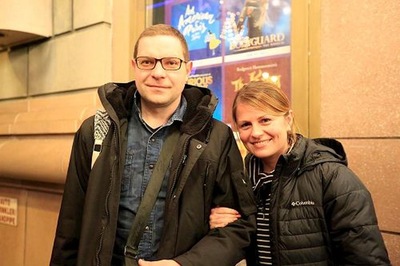 Oxana Draguta and her husband

Oxana's husband is a psychologist. He loves Chinese culture and is a big fan of everything from Chinese tea, to food, to martial arts.

Oxana felt that her marriage was arranged by Heaven a long time ago, as there were many little signs during the process. For instance, before they started dating, her husband had heard a voice tell him that he will meet his future wife very soon.

Oxans's husband was born in Europe, and was a Buddhist. He heard a voice in 2003 that told him to go to Romania, and that if he goes there, he would find things that he had been searching for.

It turns out, in Romania he would find a Romanian version of the book Zhuan Falun, and that he would begin to practice Falun Gong shortly afterward.

When he first met Oxana, he brought Zhuan Falun with him and introduced it to her. She fell in love with Falun Gong immediately, as the principles of the practice talk about 'Truthfulness-Compassion-Tolerance,' and returning to one's original true self. She believes it is what she has been searching for – the true meaning of life.

Falun Gong brought these two young people together into a happy marriage.

Oxana later gained a full scholarship from a university in America and would study there for a year.

A Chinese student once heckled her while she was collecting signatures for a petition to stop the persecution of Falun Gong and organ harvesting from Falun Gong practitioners in China. Oxana was shocked by this.

The Chinese student asked her where she found the information about organ harvesting. Oxana realized that this student believed the Chinese Communist Party's (CCP) propaganda, and she told the student, “I don't hate China. I love China and Chinese culture. But I must help to stop the persecution of Falun Gong practitioners and the harvesting of their organs in China.”

She told the student about the independent investigations into organ harvesting and the resolutions passed by the European Union and the U.S. House of Representatives. The student took some photos of the banner and said that she would do some research online herself.

Oxana's roommate was also from China. This roommate also believed the CCP's propaganda and was very wary of Oxana. However, she later found that Oxana's behavior wasn't like what China's media has said about Falun Gong practitioners. She later became more relaxed and friendly towards Oxana.

Some other Chinese students have even decided to learn Falun Gong after meeting Oxana.

Oxana has been practicing Falun Gong for eight years now alongside her husband, and she feels that she is incredibly fortunate to find the meaning of her life and her husband – all in one go.