(Minghui.org) Today's news from China includes incidents of persecution that took place in 12 cities or counties in 9 provinces. According to this report, 7 Falun Gong practitioners were subjected to mistreatment during their detention, and at least 8 were illegally arrested. 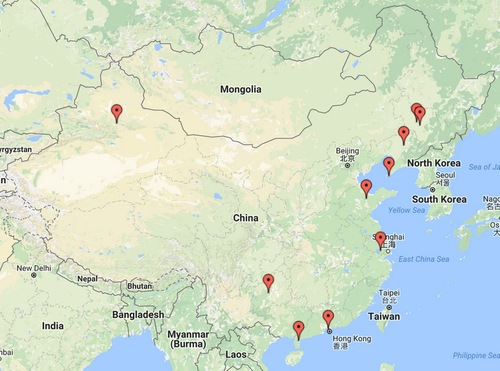 Ms. Sun Shuying, in her 80s, and Ms. Liu Chunzi, age 59, were arrested on the afternoon of March 4, 2017 by four officers, two of them were plainclothes officers, when they were talking to others about the persecution of Falun Gong.

Ms. Han Xiaolian from Jiutai District was arrested on the morning of March 3, 2017 when she was talking to people about Falun Gong in Mushihe Town. She is detained at the Jiutai District Detention Center.

Mr. Lu Fan, 60s, lives in Bei Village, Tangwu Town. His home was ransacked by four officers from the Tangwu Town Police Station and the Changle Domestic Security Division on the afternoon of March 4, 2017. The officers confiscated his Falun Gong books and materials. Mr. Lu left home to escape from further persecution.

Mr. Wang Chenglin was arrested on February 21, 2017 by eighteen people from the Shenzhen 610 Office and other agencies.

Mr. Shi Zehui is a teacher at the Jianxiong College in Taicang City, Suzhou. He and several Falun Gong practitioners were arrested in the end of January, 2017 by officers from the Rudong County 610 Office and Domestic Security Division, when they were reading Falun Gong books. He has been detained. His family is not allowed to visit him.

Mr. Shi has been arrested seven times for practicing Falun Gong. He was subjected to forced labor for three years and sentenced twice. He has been imprisoned for a total of eight-and-a-half-years.

Mr. Wang Chuang, 50, from Shahekou District is an architect. He was arrested on June 28, 2016 by officers from the Xinfu Police Station and taken to the Shahekou District Police Department. His family was informed his arrest on the afternoon of July 20, 2016. The Shahekou District Court plans to hold a trial against Mr. Wang at 9 a.m. on March 8, 2017. Mr. Wang was subjected to three years of forced labor.

Ms. Xiao Peiyan was sentenced to three years by the Yuhong District Court on December 7, 2016. She appealed, but the middle court upheld the decision of the trial court.

Mr. Zhang Ziwen was sentenced to four years in prison on December 6, 2016. His family did not learn of the verdict until they went to the Procuratorate to ask about his case on January 3, 2017.

Mr. Zhang’s family hired an attorney for him after they learned about his sentence. Mr. Zhang appealed to the Tianjin No. 2 Intermediate Court on January 12, 2017. His attorney went to visit him the next day, but he was not allowed to see his client.

Mr. Zhang’s attorney received a call from Judge Zhang Fan on January 18, 2017, saying the original sentenced was upheld. The attorney learned later that no trial was held. Two personnel had gone to the detention center and asked Mr. Zhang three questions, but they did not listen to his answers.

Mr. Zhang’s attorney went to the Tianjin No. 2 Intermediate Court on February 27, 2017 and sued Judge Zhang Fan for infringing on his client’s right to be defended.

Ms. Zhang Qinghua in her 60s from Shenhe District was arrested by officers from the Zhujianlu Police Station on November 14, 2016. She has been detained for almost four months.

It was said that the cases of Ms. Zhang and the other five practitioners were combined as one case and submitted to the Procuratorate on February 13, 2017. They are Ms. Wu Naiying, Mr. Li Guitian, Ms. Shi Yanqing, Mr. Gao Bo and Mr. Liu Defu.

Mr. Li Xifu’s daughter learned in the beginning of February 2017 that her father was transferred to Jinzhong Prison. She went to visit him on February 6. The prison did not allow her to meet with him and said she could only see him two months later, according to the prison rule.

Mr. Zhao Naiqian was placed in solitary confinement in Jiazhou Prison. He was not allowed to talk to anyone. He was under the second level of strict monitoring.