(Minghui.org) “The Chinese people shouldn't be deceived by the Chinese Communist Party (CCP) into hating other Chinese. Friends, please treasure this opportunity to learn uncensored information while you are overseas. Take home free software so you can break through the Communist Party's internet censorship and enjoy the freedom of accessing facts online.”

The above message is broadcast by Falun Gong practitioners in London's Chinatown, where each day they talk to the public to raise awareness of the persecution of Falun Gong. More Chinese are choosing to quit the CCP, the Communist Youth League, and the Young Pioneers.

Practitioners in Chinatown have seen more Chinese taking flyers and stopping to read the display boards. One tour guide regularly takes Chinese tour groups there and encourages them to learn more about Falun Gong. 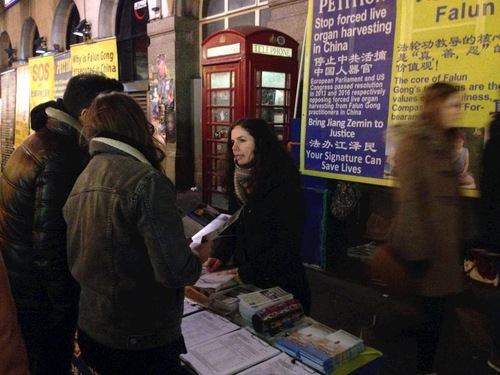 A Falun Gong practitioner in Chinatown tells people about the persecution in China. 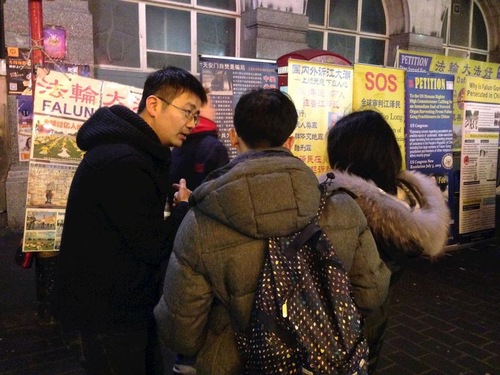 A young Chinese couple learn about Falun Gong and quit the Communist Party organizations they had joined before.

London's Chinatown saw a peak in tourists from China during Chinese New Year. These tourists watched practitioners demonstrate the Falun Gong exercises, listened to a Minghui radio program about the 2001 "self-immolation" hoax on Tiananmen Square, and read banners and displays about the persecution of Falun Gong, the CCP's killing of practitioners for their organs, and the wave of lawsuits filed against former CCP leader Jiang Zemin for ordering the persecution.

On the evening of the Lantern Festival on February 11, two Chinese young men approached a practitioner and asked why Falun Gong was against Jiang Zemin. The practitioner explained that Jiang had launched the persecution of Falun Gong and fabricated lies to try and justify his campaign.

One of the young men replied, “I'm not against Falun Gong. I know it's good. Jiang is evil. I think what Falun Gong has done will make China a better place. I want to wish Falun Gong practitioners a Happy New Year!” 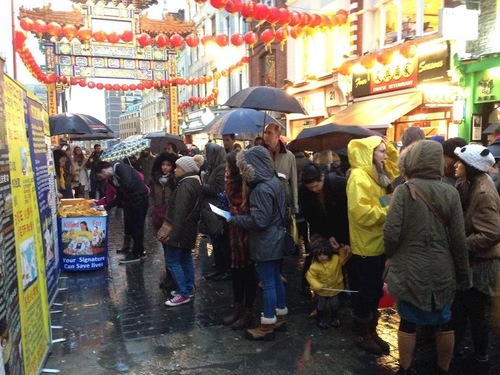 Tourists from all over the world learn about the persecution in London's Chinatown on January 29, 2017.

Despite the rain, crowds of people went to the Chinese New Year celebration on January 29. Practitioners gave out thousands of flyers that evening.

One Chinese student appeared deep in concentration as he stopped to read the display. A radio program played through a speaker, “We are here to tell you that the Chinese Communist Party is not China, and being patriotic doesn't mean loving the Communist Party, which has continually persecuted the Chinese people through political movements using the same techniques: slandering the innocent, inciting hatred, and turning people against each other. Have you ever thought about why they have threatened you not to take Falun Gong flyers overseas, and not to talk to Falun Gong practitioners? They monitor you and tell you that Falun Gong practitioners are paid. As a matter of fact, we have personally benefited from practicing Falun Gong. Some of us have personally suffered under the persecution in China. We won't be able to return to China until the CCP stops the persecution. We are on the CCP's blacklist. The CCP has lied to you because it's afraid you will learn about its crimes. We are here to tell you the true story.”

Upon hearing this, the young man turned around to leave but came back to pick up a flyer.

On the first day of the Chinese New Year, practitioners went to Chinatown early in the morning and set up their booth. A Chinese couple approached and asked what they were doing. A practitioner named Ms. Zhang told them about the persecution in China, especially the CCP's harvesting of organs from living Falun Gong practitioners.

The couple asked if Falun Gong was political. Ms. Zhang replied, “The CCP persecutes Falun Gong. We are simply stepping out to say we are good people, so don't persecute us. How can that be political?”

The couple nodded in agreement. They took flyers from the booth and left happily.