(Minghui.org) As Canadian Prime Minister Justin Trudeau's trip to China approached, Falun Gong practitioners in Toronto held a rally in front of the Chinese consulate on Thursday, calling on Trudeau to help rescue an imprisoned Canadian citizen and 12 family members of Canadians who are also unlawfully detained in China. 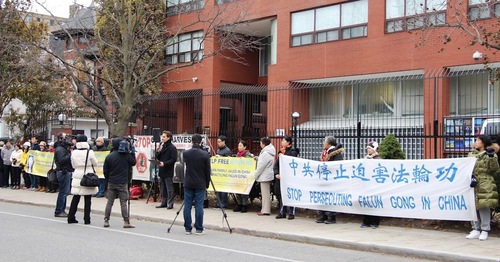 Falun Gong rally in front of the Chinese consulate in Toronto

Falun Gong spokesman Joel Chipkar introduced the case of Sun Qian, a 51-year-old Canadian citizen who has been imprisoned for nine months for her belief in Falun Gong.

Chipkar said Ms. Sun is the founder of Beijing Leadman Biochemistry Co. Ltd., a bio-company worth billions of dollars. On February 19, 2017, twenty policemen broke into her home in Beijing. She has been jailed at the First Beijing Detention Center, where she was physically tortured.

Chipkar also brought up the cases of 12 other Falun Gong practitioners imprisoned in China who are family members of Canadian citizens. One of them was sentenced to 13 years in prison. 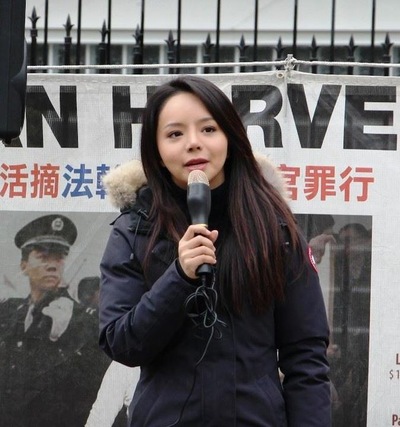 At the rally, Lin said [rescuing the imprisoned Falun Gong practitioners] is not merely an issue of religious freedom; it shows whether Canada would uphold its principles in the world and fight for freedom, dignity, and human rights in front of the dictators.

Falun Gong practitioner Li Zhe called for help to rescue his father Li Xiaobo, who was sentenced to eight years in prison in 2015. 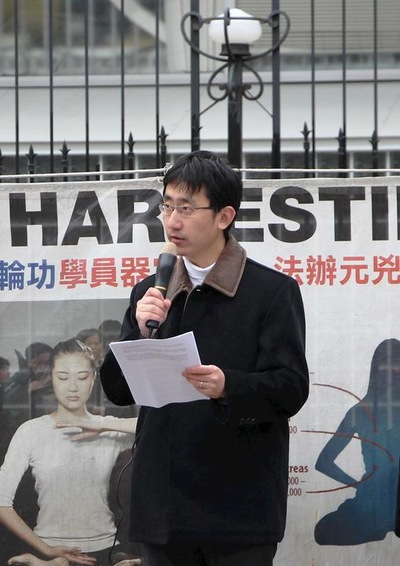 Li Zhe speaks at the rally, calling for help to rescue his father.

Li Zhe said his father was imprisoned from 2004 to 2012, and in 2015 he was arrested and sentenced again. Li Xiaobo is now imprisoned at Jiazhou Prison in Sichuan Province.

According to Li Zhe, Falun Gong healed his father's illnesses. “Following the guiding principles of Falun Gong, Truthfulness-Compassion-Forbearance, my father was respected by everybody in his workplace. One of his assistants told me that my father is the most noble person he ever met.”

“In the prison, my father was beaten, starved, and forced to do heavy labor. Due to the harsh environment, he has nearly lost sight in his left eye.” 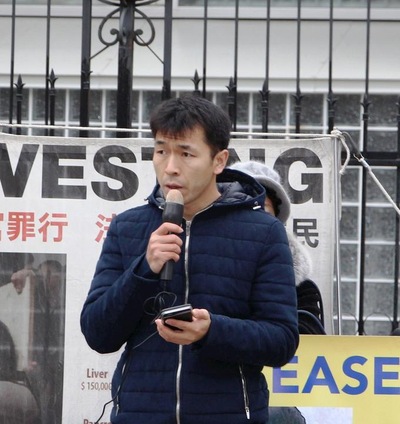 Fan Wentuo calls for help to rescue his mother from prison in China.

Luo Yanjie was arrested in 2011 and was sentenced to 13 years. She is now jailed in Heilongjiang Provincial Women's Prison.

Her son, Fan Wentuo, said at the rally that the prison does not allow his mother to tell anyone about her situation in the prison. If she does, she won't be allowed to meet with her family members. She was forced to do heavy labor and has lost nearly all of her teeth.

Fan appealed to Trudeau to help rescue all imprisoned Falun Gong practitioners in China, including his mother.