(Minghui.org) Today's news from China includes incidents of persecution that took place in 11 cities or counties in 9 provinces. According to this report, 9 Falun Gong practitioners were subjected to mistreatment during their detention, and at least 9 were illegally arrested. 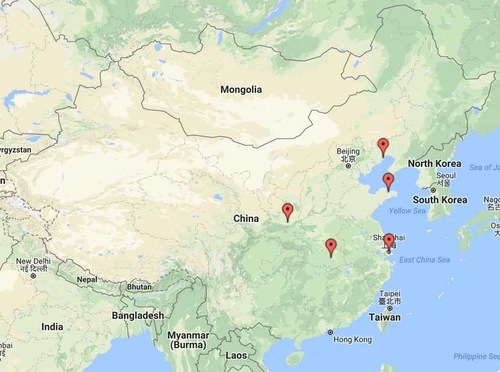 Ms. Sun Baomei, 60, has been detained in the Pudong New Area Detention Center for five months. Her case was transferred to the court.

Ms. Zhang Guihuan was sentenced to two years in prison in the Xingcheng City Court for filing a lawsuit against Jiang Zemin, the former head of the Chinese Communist Party.

Mr. Liu Shunming remains in the Minhang District Detention Center following his arrest on October 12, 2017. An officer told his wife that they had plans to sentence Mr. Liu to three years in prison.

Mr. Liu was targeted because he refuses to renounce Falun Gong. His father and wife pushed his wheelchair-bound mother, who is nearly 90 years old, to the local police station and requested his release. The local police threatened to arrest the trio.

Ms. Zhao Yiyu was sentenced to one year in prison for refusing to renounce Falun Gong.

Ms. Zhao was arrested by officers from the Harqin Banner Police Station in early May 2017. She was tried in Harqin Banner Court on August 22 and recently convicted.

He was getting ready to go to work when more than a dozen agents broke in and seized him at home. They also ransacked his office and his parents' home. The company car assigned to him was also searched.

Mr. Luan's family hired a lawyer to request his release, but he has not yet been released.

This is not the first time that the 58-year-old man has been targeted for his faith. He was previously imprisoned twice, for a total of seven years. His mother, also a Falun Gong practitioner, died shortly before his second imprisonment. He wasn't allowed to see his mother one last time.

The 28-year-old works at the Dalian Science and Technology Design Institute, which recently relocated him to Panjin. He went to apply for a temporary Panjin ID but was arrested when he revealed that he practices Falun Gong.

The local Xinsheng Police Station ransacked his rental place three days later and confiscated 46 copies of Falun Gong literature. They, however, changed the number to 62 in their interrogation record.

The case was then forwarded to the Xinglongtai District Procuratorate, which sent several people to interrogate Mr. Zhang on September 1. He urged them to drop the case, and prosecutor Yue Yang heeded the advice.

The police, however, resubmitted the case to the procuratorate in October and got him indicted. The case now rests with the local court.

Dalian City Intermediate Court recently ruled to uphold the guilty verdict for a married couple sentenced to prison for their efforts to end the persecution of Falun Gong.

Ms. Zhang Xia was arrested on March 15, 2017, and her husband Mr. Sun Jun was seized two days later when he went to the local police station to seek her release.

The local Zhongshan District Court tried the couple secretly and sentenced Ms. Zhang to 7 years and 5 months and Mr. Sun to 7 years and 2 months. The Dalian City Intermediate Court rejected their appeal without holding a hearing.

Ms. Zhang is now incarcerated in Masanjia Prison, while Mr. Sun is serving time in Nanguanling Prison. Their son was turned away when he tried to see his mother. Mr. Sun's parents were also not allowed to visit him.

Mr. Miao Fu, who was imprisoned for his faith, has been tortured on a regular basis. He was most recently beaten on November 13, 2017.

Mr. Miao was arrested on February 2, 2012, for refusing to renounce Falun Gong and sentenced to 7 years in prison six months later.

The Mudanjiang Prison guards have ordered inmates to beat him whenever he does the Falun Gong exercises or says "Falun Dafa is good." He was severely beaten again on November 13. He was covered in bruises, and the corner of his left eye was injured. The inmates also inserted needles into his right thigh.