(Minghui.org) Falun Gong practitioners participated in the Mazu Fastener Festival on October 28 in Gangshan near Kaohsiung, Taiwan. Among major manufacturers of screws, Gangshan produces about 16% of the world's supply of fasteners.

This event coincides with the Double Ninth Festival, a Chinese tradition that occurs on September 9 that celebrates hiking and good luck. Led by the 200-member Tian Guo Marching Band, nearly 60 groups participated in the parade. 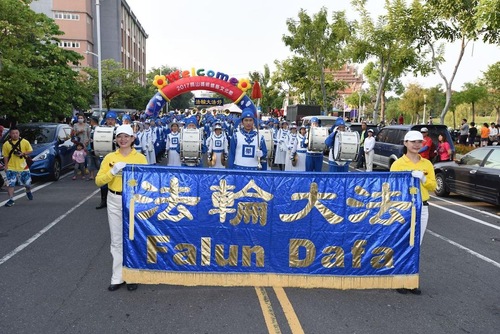 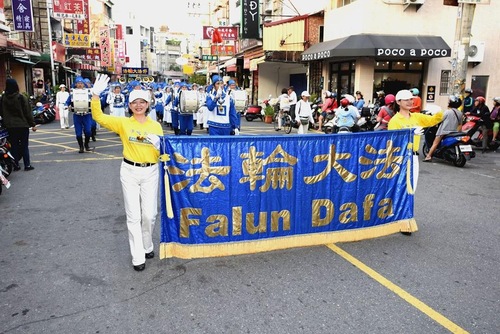 Dai Qingfu, the organizer of the event, said the Tian Guo Marching Band and waist drum players were highly skilled and very professional. “I also know Falun Gong improves one's health. Many of my friends are practitioners. That's why we have been inviting practitioners to the event the past three years,” he said.

Business owner Mr. Liu and his wife rode their bicycles behind the parade to watch the practitioners' exercise demonstration. Mr. Liu said he liked the gentle movements. His wife agreed, “I have seen practitioners in Taiwan and many other places. It is banned only in mainland China.” Both of them were impressed by practitioners' commitment to their belief and hoped that people in China would soon be able to practice it again legally. 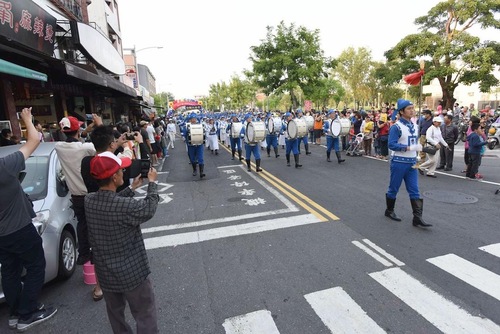 Mr. Zhu, who works in an IT firm, was impressed by the practitioners' energy. Having seen their large-scale activities before, he said he knew that the practice improved people's health and sense of morality, thus benefiting the society at large. “Too bad it is banned by the Chinese communist regime. If not, more people would practice it,” he said. He thinks the human rights violations in China should stop. 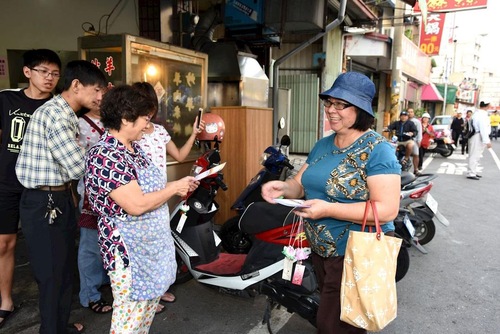 “I know that Falun Gong is suppressed in China. But look here—how great it is!” commented Mr. Li, a hotel owner. He has seen many people practicing it in parks and knows they have benefited a lot from it.

“I know you are working very hard,” he said. “It is well worth it. The day will come when people can practice Falun Gong wherever they want.”