When the practitioners resisted, the head of the prison hospital Mr. Sun and guard Chen Shuo, supported by warden Sun Luguang and Li Zhiqiang, instigated criminal inmates Zhang Shaoqing, Yang Xiaolei, Ma Dengzhou, and several others to beat the practitioners and force them to have the injections.

The practitioners shouted, “Falun Dafa is good” to protest. Inmate Ma Dengzhou tied a towel around their necks while other inmates held their limbs until they were almost strangled. Many coughed up blood.

Practitioner Su Wen tried to talk to the head of the prison hospital, Sun, about Falun Gong, but was ignored. Practitioners Wang Zhongshi and An Libo tried to reason with inmate Sun Luguang, who responded, “You should be thankful that we are not using pepper spray on you. The injection was for your benefit.”

During the routine night time roll call on August 23, 2017, practitioner Wang Changchun refused to stand up and respond to protest the forced injection and ill treatment. The next morning warden Sun Luguang and Li Zhiqiang of the 11th ward ordered inmates to take him to the second floor office, where he was tied to an iron chair.

He was later taken to the prison shower hall, where he was handcuffed and shackled to an iron chair and deprived of sleep. The following afternoon, he was carried to the strictly disciplined team for further torture. 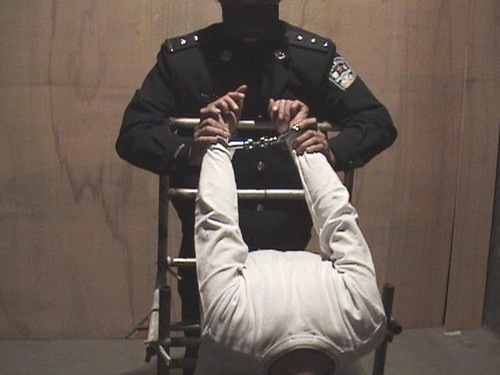 Practitioner Lu Fengtian went on hunger strikes twice starting in April 2017 to protest the ill treatment. He is currently detained in a hospital.

Many practitioners have been tortured until they were not able to take care of themselves in their daily lives. Ma Fujian is gaunt and has been living on intravenous injections for the past two years in Xinkang Hospital after going on hunger strikes. Huang Min, 73, was a lecturer in the Electrical Engineering Department of Jiamusi University. He was sentenced to 20 years in prison in 2002 for broadcasting Falun Gong programs on TV. He suffered a variety of brutal torture and is now in the prison hospital, unable to care for himself.