The Netherlands: Calling for an End to the Persecution in China

(Minghui.org) People in the university town of Maastricht recently had an opportunity to learn about Falun Gong and to sign a petition protesting the state-sanctioned organ harvesting from living Falun Gong practitioners in China.

Falun Gong practitioners in the Netherlands went to Maastricht on October 7, 2017, to demonstrate the exercises, to tell people about the practice and the fact that it is banned in China by the communist party, and to collect signatures on a petition calling for an end to the persecution, especially forced live organ harvesting. 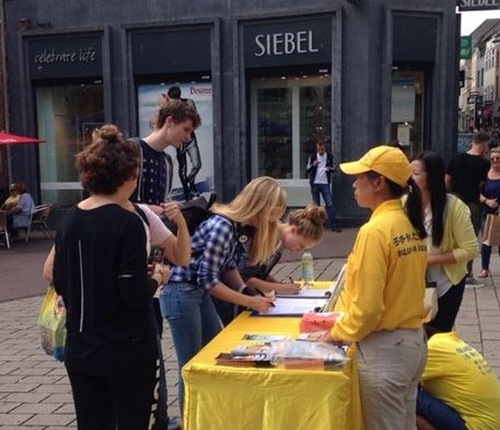 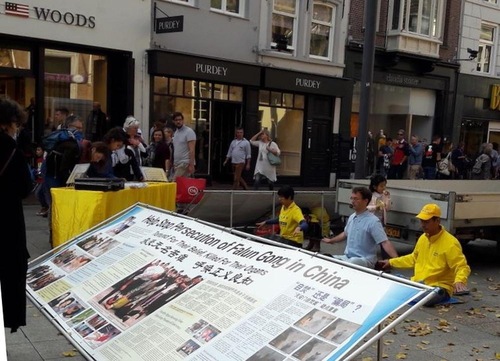 Falun Gong practitioners in the Netherlands tell passerby by about the practice.

One woman exclaimed, “When I heard your music, I was moved to tears. I don't know why, but I can feel very strong energy. The persecution is horrible! I would like to sign the petition to protest forced organ harvesting. Such a violation of human rights is incredible!”

A physician whose specialty is organ transplants told a practitioner that she was stunned to hear about the persecution. She signed the petition without hesitation.

Many people encouraged the practitioners to keep up with the good work, and some were interested in learning Falun Gong. A lady said she and her friends wanted to learn it. She obtained contact information to make a future appointment.

A tourist from China told a practitioner, “What you are doing is right. The persecution must stop! It's evil! Things are changing in China. Some police officers won't arrest Falun Gong practitioners, but you still have to pay attention to your safety if you openly talk about it.”

Several tourists from China took brochures and videos of the Falun Gong activities. They planned to take the information back to China. A tourist said, “I have seen your activities in Cologne. I didn't know you were in Maastricht, too!”