(Minghui.org) Today's news from China includes incidents of persecution that took place in 13 cities or counties in 8 provinces. According to this report, 3 Falun Gong practitioners were subjected to mistreatment during their detention, and at least 20 were illegally arrested. 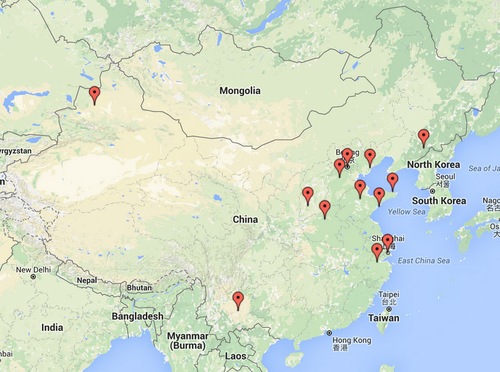 Ms. Chang Meijie was arrested by Liushouying Police Station officers for talking to people about Falun Gong at the Liushouying Farmers Market on July 10, 2016. She was held in the Funing Detention Center for 15 days.

Ms. Li Yan is being held in the Zibo City Detention Center. Her case files have been submitted to the procuratorate for prosecution.

Ms. Zhao Xilian, a former teacher at the Zhengzhou City Agricultural University, has been persecuted many times for practicing Falun Gong. After being imprisoned for 10 years she returned home in 2015. Her employer fired and her husband divorced her. Her identification card (ID) was confiscated by the Dongfeng Police Station in the Jinshui District. She could not find a job without her ID and thus lives in poverty.

Ms. Yang Jing and Mr. Zhang Jing from Liuhe County were arrested at their rental homes on the afternoon of July 15, 2016. Ms. Du Juan, Ms. Sun Qunying, and Ms. Liu Changchun were also arrested that day.

Ms. Qiao, Ms. Hong Yan, and Ms. Rong Hua were arrested by Zhonghanzhuang Police Station officers for talking to people about Falun Gong in Zhonghanzhuang Village on July 16, 2016. They are detained in the Wangdu County Domestic Security Division.

Ms. Zhang Xiuying from Caolu Town in the Pudong New Area was arrested for talking to people about Falun Gong on Wulian Road, Pudong New Area, on July 13, 2016. Her home was ransacked.

Ms. Pang Aiyu form Ligezhuang Town in Jiaozhou City was arrested on July 14, 2016, for talking to people about Falun Gong in Madian Village, Beiwangzhu Town, Jiaozhou City. She is detained in the Pudong Detention Center in Jimo City.

Mr. Han Mingsu and Ms. Zhang Xiufen were arrested by Huangguan Police Station officers in the Jing District when they talked to people about Falun Gong on July 14, 2016. Both practitioners were held in the Weihai Detention Center for 10 days.

Mr. Song Wanlin was arrested by officers from the Xijie Police Station and the Domestic Security Division on the afternoon of July 13, 2016, for mailing Falun Gong informational materials. The officers confiscated his computer. He is now in the Yaodu District Detention Center.

Ms. Cao Suzhen was arrested by Wujing Police Station officers on the morning of July 16, 2016, for distributing Falun Gong informational materials. The officers confiscated Falun Gong books and printed materials. She was released that day.

Ms. Zhao Shuyuan was sentenced to five years in prison by the Karamay District Court for helping an elderly practitioner file a lawsuit against Jiang Zemin, the former head of the Chinese communist regime who initiated the persecution of Falun Gong. She was taken to the Xinjiang Women's Prison on May 3, 2016.

Ms. Zhao went on a hunger strike to protest the persecution. She was force-fed. Her head was shaved and her hands were tied to the side of the bed.

She suffered heart failure and lapsed into a coma on June 26, 2016. She was taken to the No. 5 Affiliated Hospital of Xinjiang Medical University for rescue. After she appeared to have recovered, she was transferred back to the prison hospital.

She lapsed into a coma again on July 12, 2016, and rushed to the Air Force Hospital. She was diagnosed with severe malnutrition, severe anemia, hypoalbuminemia, electrolyte disorders (hypokalemia), leukopenia, and bedsores. She was emaciated, unable to walk, and could not take care of herself. However, the prison authorities refused to release her on medical parole.