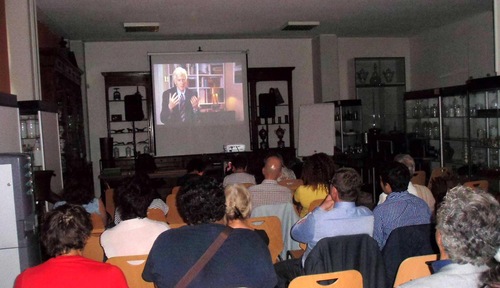 Attendees were greatly disturbed by the brutal persecution of Falun Gong in China, especially the Chinese Communist Party's (CCP) harvesting of organs from living Falun Gong practitioners. Some were in tears. One of them said that she planned to visit China to look for the victims of the persecution and help them.

A secretary of a non-governmental organization, who also serves as a consultant for the United Nations, said he was shaken by the film. He hopes more people can watch the film and help stop the killing. He also said that Falun Gong's values should be respected by all people, and that practitioners represent justice.

Another attendee said all people should watch this film and that it should be played on large screens, such as those in stadiums. He commented that the same terrible tragedy would happen again if people don't remember lessons from history.

The Chair of the Geneva Pharmacy Association, who provided the venue, was shocked by the atrocity in China. He offered to screen the film at the same facility in the future and said the work against the persecution should continue until its end.