(Minghui.org) The Taipei 101 Observatory is a must-see attraction for many Chinese tourists. The square in front of the skyscraper is also a battlefield of truths and lies.

Another group has set up in the square to promote the Chinese Communist Party's hate propaganda against Falun Gong.

Among many practitioners who take turns to come here, one can often see Li Hua-En, a middle-aged man from Yilan County who moved his work to a night shift so he can have more time to talk to Chinese tourists at Taipei 101. 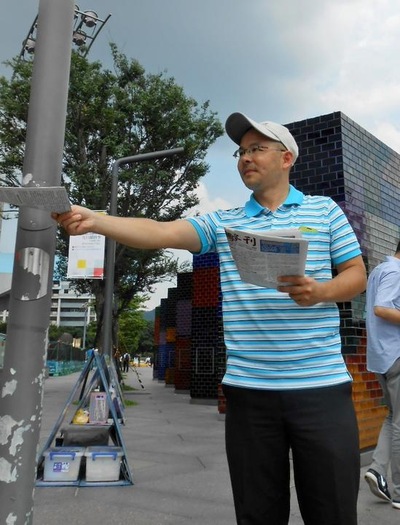 Li once argued with the pro-communist group and was upset by their verbal abuse. A nearby resident encouraged him, “Brother, don't let them bother you. You just continue your own work and ignore them.”

One tourist was a Chinese policeman, who told Li that he realized that he had been deceived by the Communist Party after watching NTDTV and breaking through China's internet censorship.

“You have to hold on and clarify the truth. If you [Falun Gong] give up, Chinese people will have no hope,” he said to Li Hua-En.

Some time ago, the pro-communist group set up a tent in front of Taipei 101 and painted slander against Falun Dafa on it. However, Li noticed that the tent suddenly disappeared one day.

Later that day, a French tourist spoke up and told the pro-communist people to stop attacking Falun Gong. When the argument became heated, a passerby called police.

Li thanked the Frenchman for his support and learned why the tent disappeared: earlier that day, the Frenchman saw the tent and asked his Taiwanese girlfriend about the words painted on it. When he heard what it said, he angrily tore down the tent.

Li Hua-En first heard of Falun Dafa in July 1999, when the Chinese Communist Party started its persecution of the group. He became interested in the practice after seeing media reports of practitioners persisting in their faith despite violent suppression.

He purchased a copy of Zhuan Falun, the main text of Falun Dafa, in January 2000 and found an exercise group close to his home. From there, he learned the exercises and started practicing Falun Dafa.

He used to catch colds and the flu often and became too weak to work efficiently. Practicing Falun Dafa improved his health, and his ailments disappeared.

He said the Falun Dafa teachings led him to follow the principles of “Truthfulness-Compassion-Forbearance” and to pay less attention to fame and gain, so he lives a happier and freer life.

Li hopes more Chinese people will learn about the persecution and separate themselves from the Communist Party and its youth organizations.