(Minghui.org) Haaretz, one of the three major newspapers in Israel, published an article in Hebrew on May 5, 2016 and in English on May 6, entitled, “Citing Human Rights Violations, Israeli Rabbis Protest Health Deal with China.” The article was published after 16 Rabbis signed a letter to Israeli Health Minister Yaakov Litzman, following a recently-signed agreement with China's Health Ministry.

The letter was sent on the eve of Holocaust Remembrance Day, to stress the moral responsibility of the Jewish people towards others who suffer persecution. Some of the 16 Rabbis who signed the letter are prominent figures in Israel’s Jewish community. 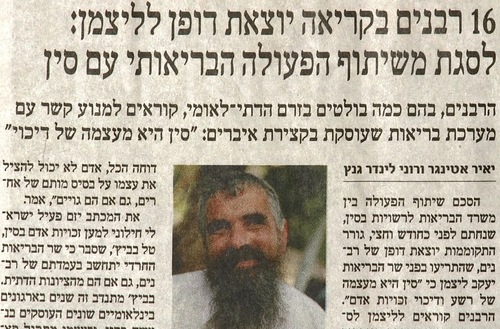 The article in the Israeli newspaper Haaretz

The article reads: “The rabbis are calling on Litzman to back out of the agreement due to a long list of Chinese violations of human rights, in particular the forced harvesting of human organs for transplant.”

It also cites the Rabbis’ letter, “In camps in China they harvest organs for sale in the organ transplant industry, under just partial anesthesia, and then they toss away for destruction the bodies of people who have yet to die.”

“Organ harvesting for the sake of trafficking in organs for transplant is done in China by the authorities themselves. As Jews who well remember the persecution our people endured, and the cruelty of our enemies throughout the generations, it is our duty to warn against the forging of agreements with evil regimes, agreements that could strengthen them and support their actions.”

The issue was also covered by Arutz 7, a news website which is most popular in religious circles, by radio station “Galei Israel,” and by the religious news website “Srugim.”