(Minghui.org) Falun Gong, a spiritual discipline also known as Falun Dafa, began spreading as a grassroots movement in China in 1992. Within a few years, nearly 100 million people in China had learned the practice. Despite the brutal persecution that began in 1999 and the Chinese regime's slanderous propaganda campaign, newcomers have continued to take up the practice both in China and worldwide. 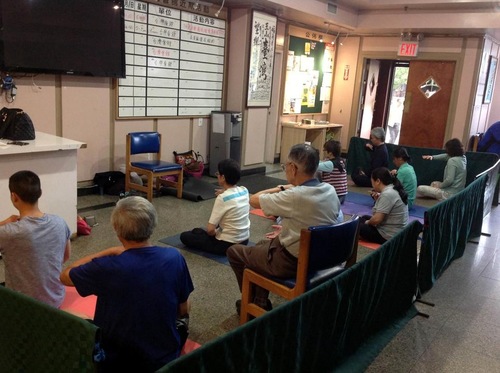 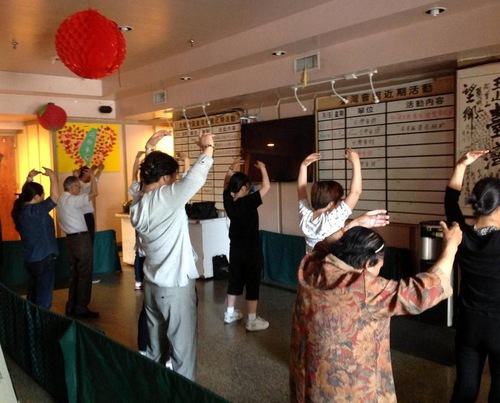 A nine-day Falun Dafa seminar was held in Flushing, New York's Chinatown, from June 1 to 9, 2016. Attendees watched videos of the main lectures given by the founder of Falun Dafa, Mr. Li Hongzhi, and learned the movements of the five exercises. The students shared their experiences and thoughts after the session was over.

A couple from China learned about the nine-day session from a newspaper. The wife had heard about Falun Gong before, and was glad to finally get the opportunity to learn. The wife had suffered from anxiety and fatigue. A few days into the session the quality of her sleep significantly improved. She also mentioned that she was especially moved when she heard Teacher Li say, “When it’s difficult to endure, you can endure it. When it’s impossible to do, you can do it.” Zhuan Falun

The husband said that he didn't have much to do after he retired, so he smoked a pack of cigarettes each day to kill time. After the session, he nearly quit smoking completely because he no longer had the urge to smoke, nor was he experiencing withdrawal symptoms. He said that he would find the book Zhuan Falun once he returned to China since he might get caught by Chinese regime authorities if he took one back on the plane.

A young man from Brooklyn woke up every day at 5:30 a.m. to do the exercises before he came to the class. He read about the session from the newspaper and was curious. He used to waste a lot of time at home playing video games. After learning Falun Gong he gave up this addiction and easily quit playing video games.

An old man from Taiwan came to the class because of his health problems and a doctor suggested qigong for him. The first five days he came by taxi. From the sixth day on, he was able to get up early in the morning and was full of energy. He then took the subway to the class. His wife said that he used to have trachea problems and had suffered a stroke a while back. Lucky for him he found Falun Gong, she said. He did the exercises every day at home after the class. His wife became a practitioner after seeing how it improved his health.

Ms. An has been hearing about Falun Gong for the past dozen years, but had been preoccupied with work until recently. After she retired, she led a comfortable life but often felt that something was missing. She believed that there should be a purpose in life other than waiting for it to end. She did some research on Falun Gong. She was convinced that it must be extraordinary in some way and that was why hundreds of millions of people chose to practice it. After the session, she said that Falun Gong taught her profound principles and improved her health. She said she had found the sense of purpose she was looking for.

Ms. Huang decided to find out more about Falun Dafa because of her younger sister. Her sister learned the practice in 1997 and later taught it to her grandmother, who benefited from the practice. Later her parents also became practitioners. Ms. Huang was in the U.S. alone with a child who was very rebellious. Her sister suggested that the Falun Gong teachings may help with her problems.

Ms. Liu from China came on her daughter's recommendation. She knew that Falun Gong practitioners tend to look a lot younger than their age and became curious about it. After the session she found that the practitioners not only looked young, but were very healthy. Moreover, she resonated with the principles of being virtuous and “...not fight back when being punched or insulted,...” (Zhuan Falun)

The host of the nine-day session, Ms. Tina Chao, learned the practice from her uncle. Her husband became a practitioner after seeing her health improvements and his asthma of 20 years was gone within three months. Now Ms. Chao's whole family from her grandparents to her children are all practitioners.