(Minghui.org) As a part of the celebration of Falun Dafa Day last week, groups of practitioners from all over the world did the Falun Dafa exercises in New York City's parks, including Central Park, Bowling Green Park, Battery Park, and Cadman Plaza Park. 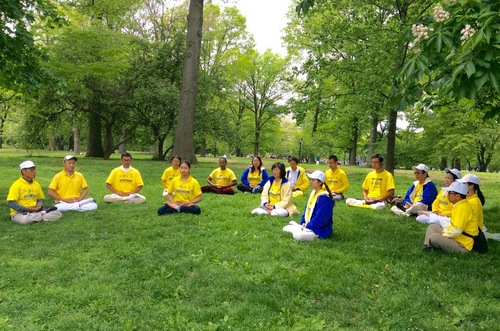 Practitioners do the Falun Dafa exercises in Central Park, Manhattan.

The beautiful scene and peaceful energy interested many tourists and local citizens. Some people stopped and watched, some asked for more detailed information of the local exercise sites, and others learned the exercise movements. 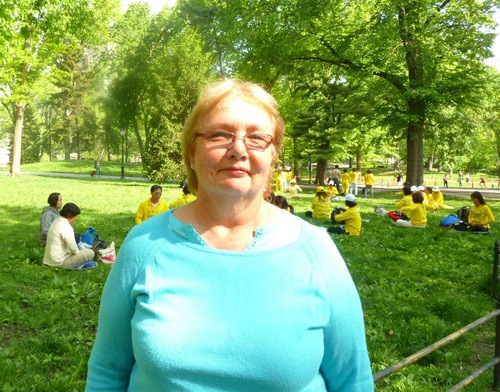 Marjoram Allen from California has been practicing Tai Chi. She saw practitioners doing the Falun Dafa exercises near an entrance of Central Park on 7th Ave.

“This practice is more gentle,” she said. “I like it very much. I can enjoy the peacefulness. The energy field is beneficial.” Marjoram says she wants to continue practicing once she gets home.

One woman was surprised to see practitioners doing the exercises everywhere in Central Park. She said she could feel the energy field and asked for detailed information. After a practitioner played a six-minute introductory video on a cell phone, the woman wanted to learn the exercise movements right away.

She said that her mind was occupied by the characters “Dafa” when learning the exercises. The practitioner who taught her the movements gave her a copy of Zhuan Falun, the main book of Falun Dafa. 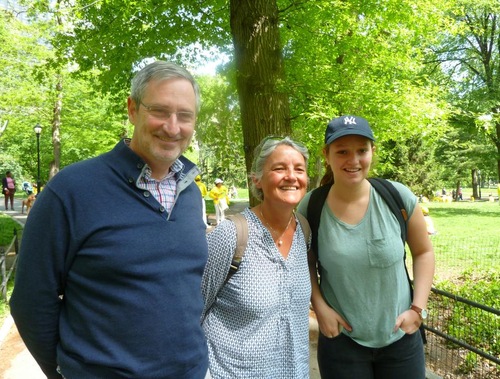 Gaanthiligge from France was traveling in New York with his wife and daughter. His family took many pictures of Falun Dafa exercise sites in Central Park. “I don't practice Falun Dafa, but the peacefulness it manifests is very impressive,” he said, “I know it has been suppressed in China. People should pay attention to it. I am concerned about it, too.”

When he learned that about 100 million people in China used to practice Falun Dafa before the persecution started, he smiled, “Everything will be restored sooner or later.”

Rich, a college instructor, was impressed by the practitioners' march in Manhattan on May 13. He saw groups of practitioners meditating in Central Park the next day, which drew his attention and made him want to learn more.

He said he likes the spiritual component of Falun Dafa and asked practitioners to demonstrate the exercises for him. He indicated that he would tell what he learned to his students.