May 21, 2016 |   By a Falun Dafa practitioner in Shenyang City, Liaoning Province

(Minghui.org) Whenever I recall how we Falun Gong practitioners participated in the opening ceremonies of the Asian Sports Festival in 1998, I realize what a miracle it was.

Our invitation to participate arrived only five days before the event took place. Under such a tight schedule, we made uniforms, trained a parade team, and arranged practitioners to sit in the audience seats to form three Chinese characters of “Falun Gong.”

It was such a great success that the organizer awarded us the only “Spiritual Civilization” award, and the media reported positively about Falun Gong. When we showed the pictures to Master later, he said the three characters were “really nice!”

The city of Shenyang hosted the Asian Sports Festival in 1998. Sponsored by the General Association of Asian Sports Federations and the National Sports Association of China, the purpose was to showcase non-Olympic sports in Asia. One such event was qigong, at the time thought to be a mysterious but effective practice that helps people cure illnesses and get fit.

We very much wanted to participate in the event to help people see the wonderfulness of Falun Gong. As the festival neared, we had not received an invitation, although other qigong exercise groups had received invites several months before.

We soon learned that in 1997, former Chinese Communist Party (CCP) head Jiang Zemin and his followers had started to stir up trouble for Falun Gong. They organized covert investigations to try to find a reason to ban Falun Gong, but none of the reports came back with anything.

Aware of this dynamic, the Shenyang Sporting Commission did not invite us.

We started to educate government officials: Falun Gong teaches people to be unselfish and to live by the principles of Truthfulness-Compassion-Forbearance.

I went to the municipal sports commission and met with a section chief who had severe heart disease. I told him about myself, that I had many chronic ailments. I could not stand up straight. At the height of my illnesses, I had to be carried up and down the stairs. I completely recovered after I practiced Falun Gong. I could ride a bicycle for 20 miles without tiring.

The section chief was impressed and wanted to learn the exercises. I brought him a copy of Zhuan Falun a few days later, and he was very appreciative.

Other practitioners went to parks and town squares to do the exercises, tell people about Falun Gong, and share their stories. Many people started to practice. 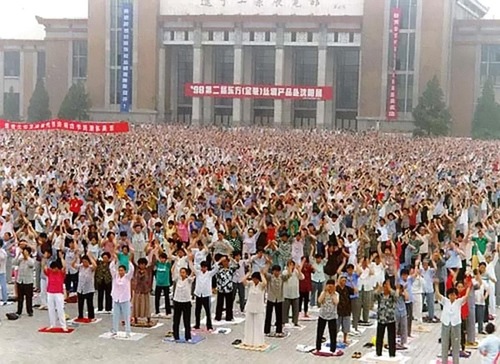 Five days before the event was scheduled to begin, we finally received an invitation.

We received 1,500 tickets to watch the opening ceremonies.

I suggested to other practitioners, “If some of us wear a white uniform and some wear yellow, we can form the Chinese characters in the audience section.”

They liked the idea. We had only one thought, to show the mighty virtue and wonderfulness of Falun Gong to the people at the sports festival!

A practitioner used a computer program to create a design of 1,500 people with the words “Falun Gong” in yellow on a white background. We divided the seating among practitioners from each district of Shenyang.

“Can each person hold a board? The characters will be bigger,” I said.

A young female practitioner said, “That's great! I’ll do it. I will buy paper and glue sticks. I’ll have them ready by tomorrow morning.” Another practitioner offered to get the boards.

That night, I went to her home. “It's all done!” she said. She showed me 290 boards, red on one side and blue on the other. She waved two colorful ribbon sticks in the air. “This is for the coordinator,” she said with a smile. I was deeply moved by her unselfish, diligent work.

The next day, August 20, we gathered outside the stadium just after 5 a.m. The doors opened at 7:30 a.m. Practitioners in yellow and white uniforms were seated accordingly. We distributed the red and blue boards to those wearing yellow uniforms.

I went to the field to assess the overall effect. Under the sun, the characters were shiny and eye-catching. The red and blue colors were solemn. With the yellow uniforms below, they appeared to have a 3D effect.

Though practitioners had never practiced flipping the board, they did it with great uniformity. I was totally moved! Tears fell down my face. It was a miracle of Falun Gong! 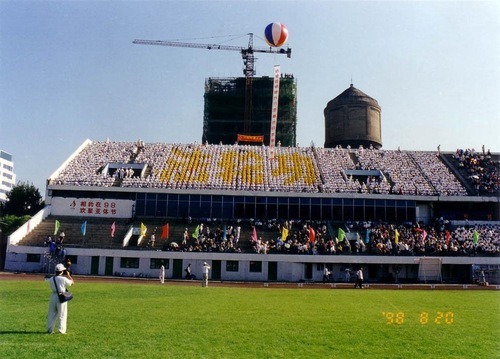 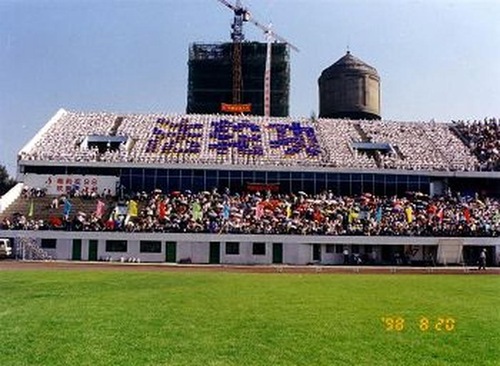 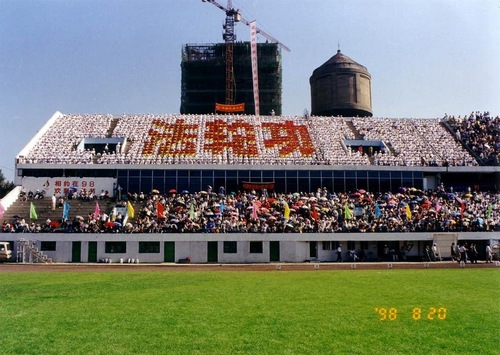 Marching and Demonstrating the Exercises

For the parade at the opening ceremonies, 68 practitioners formed the Falun Gong square. Some retired military officers with drill experience led the team to practice. They practiced both morning and evening every day. Nobody felt that the schedule was too harsh, and in fact the time was too short. They had only five days after all. The uniforms soon arrived. 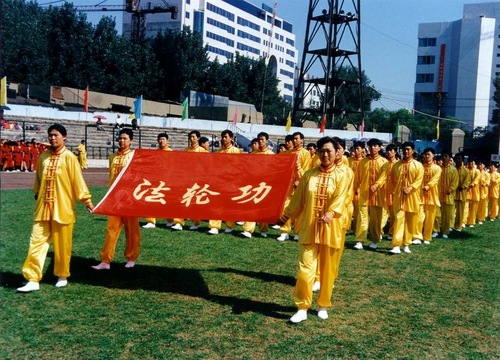 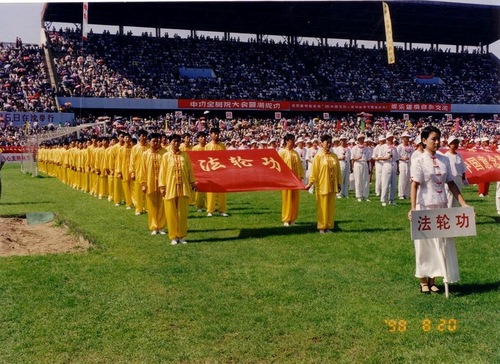 The Falun Gong team, in its yellow exercise uniforms, was especially striking. With only five days of practice, their uniformity and the unique style of cultivators were quite impressive, compared to other groups that had practiced for several months.

They demonstrated the standing exercise in the field, and later the sitting exercise.

We sat under the sun for six hours. Nobody got up and walked around. No one complained. Everyone sat quietly. People from other exercise teams left in the middle of the program as the sun bore down.

Falun Gong was the only group that stayed to the end. Our parade team marched out at the end of the ceremonies. The organizers issued Falun Gong the only “Spiritual Civilization” award.

People from other exercise groups expressed their admiration. “Look at those Falun Gong people. How they stayed together. Not a single piece of trash was left in their area.” That was true. When we left, we picked up all our trash.

There were not enough buses for everyone at the event, so we walked home. We talked about our feelings during the ceremony and cultivation experiences. No one felt tired walking six miles home. We were just excited.

Later the organizer published a special festival edition. Both the front and back covers displayed photos of Falun Gong practitioners doing the group exercise.

The head of the Shenyang Sports Commission thanked us after he received praise from the Director of the State General Administration of Sports. “The spread of Falun Gong in Shenyang is a healthy thing!”

Several media reported on Falun Gong's exceptional performance at the festival. China Youth Daily reported on the opening ceremonies in an article entitled, “The Festival of Life” on August 28, 1998. One third of the article praised Falun Gong and featured two pictures of Falun Gong practitioners. One story was about practitioner Chen Guihua, whose illnesses were cured after practicing Falun Gong, and how she had donated a quarter of her income to support a poor student to complete his college education.