The Story of Three Brothers

(Minghui.org) Growing up in the same neighborhood, Michael Lewis, Kacey Cox, and Yonas Kidane treated each other like brothers. “We often hung around with each other and laughed together,” said Kacey, sales manager of a company in Toronto, Canada.

But life was not always filled with laughter. During challenging times, these brothers supported each other with encouragement, and to find solutions.

“The best thing that ever happened in our lives was on July 14, 2010,” Kacey recalled. On that day, Michael sent him an email and telephoned him, “Hey, Kacey! I have finally found what we have been looking for in our lives. This is the best. Come and take a look!” His voice was filled with excitement.

Michael was referring to the video lecture by Mr. Li Hongzhi, the founder of Falun Dafa. The three became cultivators after that day, and began practicing the ancient self-improvement meditation system. Almost six years have passed, and they were happy to share their story with us.

A Lighthouse in the Journey of Life

Michael, a HVAC technician, used to be a heavy smoker who drank a lot. Due to his bad temper and minimal contribution to the family, his wife divorced him. His second wife often argued with him, too. Although he had good times with Kacey and Yonas, Michael often felt lost—he needed something more fundamental that could guide his life.

“During those days, I was searching for topics related to energy,” Michael explained. On the evening of July 13, 2010, he typed “Taichi” into the computer and began to search. He saw a video link for Falun Dafa. Remembering that Falun Dafa practitioners in Chinatown had told him about the meditation, and that he had signed a petition calling for a stop to the persecution in China, Michael began watching the video. He watched for that entire evening, and finished during the following few days.

Michael said, “The video lecture explained many things, in great detail, something that never happened in my life, and it touched my soul.” He said it was like awaking from a dream, and that he was then able to see the blind spots in his daily life. “Before that, I was like a ship lost at sea. I have now found land, with a harbor that provides safety, and more importantly, hope. This is something I was waiting for my whole life.”

Prior to that moment, Michael always thought about living well or having a comfortable life. Now he was clear on what to do, because his life had a new beginning. “Starting from that time, I realized that I have to be more responsible for my family, as a husband and a father. That is, I needed to become a better person and contribute more to society.”

He soon decided to stop drinking and smoking. “It was not easy for me. I stopped them one day, but started again the next day.” His efforts continued like this many times and were very painful. One day, he knelt down in front of Master Li's image, promising to stop both bad habits, and asked Master for help.

Miraculously, he was able to quit drinking and smoking successfully that day.

Michael also talked with others about Falun Dafa at work, and on other occasions. “In the beginning, I felt a little upset—why is it that only us three brothers knew about Falun Dafa?” Nonetheless, they purchased 15 copies of Falun Dafa books, for their families and friends. “Then one day, I overheard that there were hundreds of Falun Dafa practitioners in the greater Toronto area. I was so happy,” he said with a smile.

Impressed by the positive changes in Michael and the two other brothers, his wife also began reading the book Zhuan Falun one year later. 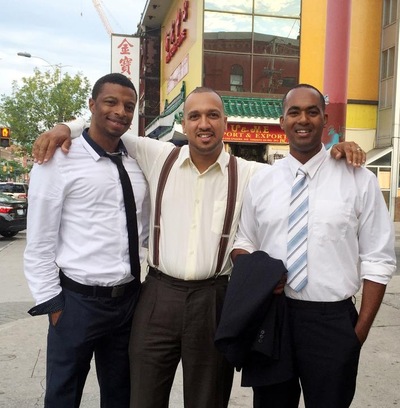 After receiving Michael’s phone call on July 14, 2010, Kacey went online and watched the video lecture that evening. “I was amazed that Master Li's teachings were so profound. As I continued watching, I found that all the questions and confusion I had earlier in my life were addressed. And yet, Master explained these things in a relaxed and natural way. I immediately knew this was the truth I had been searching for.”

Upon hearing Master explain the principle of “No loss, no gain,” Kacey was relieved. He somehow always believed in this principle, but was not sure where it came from. He was now able to understand it on a deeper level.

Kacey then downloaded the audio files for the lecture series and listened to them on his way to and from work. “I spent lots of time listening to the lecture every day that summer,” he said.

Four months later, these three brothers went to a group Fa-study and discussion in Toronto one Friday evening. “We were shocked,” Yonas explained, “First, we always thought only three of us were practicing Falun Dafa in the local area, and we did not know there were hundreds of other practitioners. Second, I was surprised by the strong energy field in that environment. We were all very happy.” 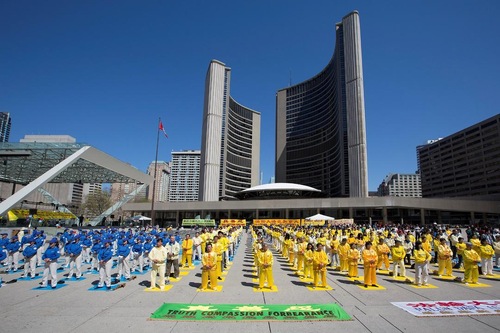 Although there are many things one needs to do in daily life, Yonas knew there was something in particular that was essential. But he didn’t know what it was. Through the teachings of Falun Dafa, he felt that all the dots became connected, and knew that the purpose of life was no longer money or material interests.

Yonas added, “I always considered Michael an elder brother because he was someone we could trust and rely on. Now once again, he found Falun Dafa for us, something that will finally lead us back home.”

As the Chinese New Year started several days ago, these three brothers sincerely thank Master Li for introducing Falun Dafa to the world, and wish the best to all practitioners.