(Minghui.org) Falun Dafa practitioners participated for the second year in the Kolkata Book Fair from January 26 to February 7, 2016. It is the world’s largest non-trade book fair, Asia’s largest book fair, and the most attended in the world, with over 2 million visitors. The fair offers a typical fairground experience with a book flavor – with picnickers, singer-songwriters, and food courts.

Kolkata, known as Calcutta during British rule, is the capital of the Indian state of West Bengal. Renowned for its literary, artistic, and revolutionary heritage, Kolkata has often been dubbed as the Cultural Capital of India or the Literary Capital of India.

At the Kolkata Book Fair last year, people asked for the Falun Dafa books in Bengali, the local language. A practitioner worked diligently to coordinate from many sources to get the book ready for publication. They were delivered a day prior to this year's fair. 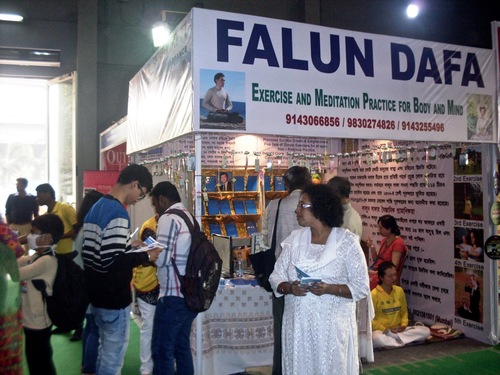 Falun Dafa practitioners demonstrate the exercises and pass out flyers at their booth at the Kolkata Book Fair.

The few practitioners in Kolkata were supported by practitioners from Mumbai, Bangalore, Sarnath, as well as from South Korea and Vietnam. The response was overwhelming. The booth was crowded throughout the day, with practitioners demonstrating and teaching the exercises, and giving out fliers.

Nearby vendors wanted to know why there was always a crowd at the Falun Dafa booth. It was amazing to see people stand and read the Falun Dafa story in large print on the backdrop of the booth. 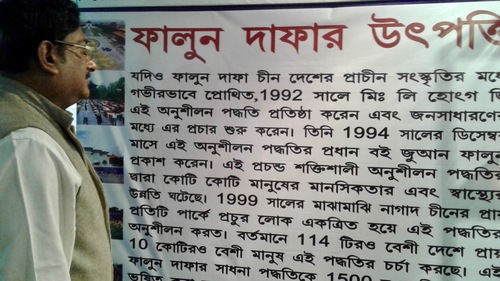 A practitioner answers questions for a visitor, while others read display information at the booth.

In no other book fair have Dafa books been sold in such large numbers. People came from distant states to purchase the books. Often when the practitioners were packing up for the day, people would come and buy the books as if they did not want to miss out on something precious. Many people who purchased them came back to buy a second set for their relatives.

Some of the older people who purchased the books said that this time around they could understand it better because it was written in their local language. They also said that they were amazed how their aches and pains were alleviated after reading a little bit, and were convinced that the book had amazing power. 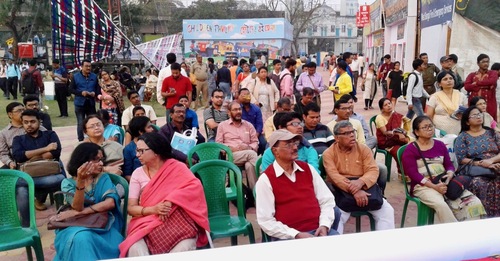 This year, several police officers and security personnel showed particular interest in the books. They kept coming back in groups and bringing their relatives. They said they would like to organize an exercise demonstration.

The communist regime in West Bengal lasted for 34 years and ended around six years ago, so the older generation could relate to the persecution of Falun Dafa practitioners in China. The younger people, who have been deluded by the stories of economic prosperity in China, needed a little more explanation and clarification.

All the practitioners who participated in the Kolkata Book Fair felt that it was a great opportunity to reach out to so many people and create awareness of Falun Dafa. Local practitioners have organized follow-up sessions to teach the exercises. They look forward to participating again next year and will plan for how to reach out to even more people.