Germany: Rally Held in Front of Chinese Consulate in Munich Calls for Stopping the Persecution of Falun Gong

(Minghui.org) Falun Gong practitioners held a rally in front of the Chinese Consulate in Munich, Germany on the morning of November 4, 2016, two days before the annual European Falun Dafa Cultivation Experience Sharing Conference. A series of events was arranged to raise awareness of the Chinese Communist Party's (CCP) persecution of Falun Gong and the CCP's state-sanctioned organ harvesting from living Falun Gong practitioners for profit. 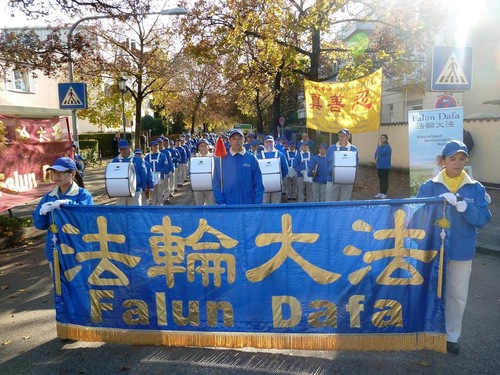 The European Tian Guo Marching Band performs in front of the Chinese Consulate in Munich, Germany on November 4, 2016. 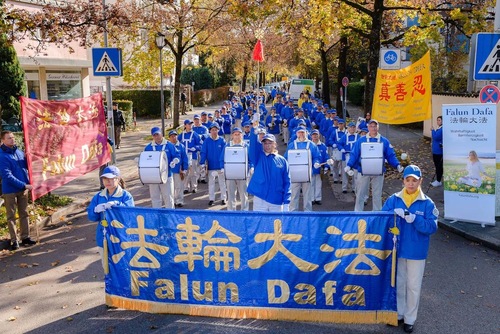 Falun Gong practitioners conduct activities including performance by the Tian Guo Marching Band in front of the Chinese Consulate in Munich.

MEP Arne Gericke is one of the 12 initiators of written declaration 48 of the European Parliament. Over half of the MEPs signed the declaration, which was passed in parliament in September 2016. It calls on the European Union and European Parliament to take action to stop the CCP's live organ harvesting from Falun Gong practitioners and other prisoners of conscience. Independent investigation was also requested.

MEP Gericke sent a letter to the rally. In the letter he stated that the written declaration was a milestone in opposing the CCP's organ harvesting crimes. As a Catholic, he indicated that he had many beliefs in common with the peaceful and kind Falun Gong practitioners. He said that we should keep working for justice.

German democracy advocate Liangyiong Fei spoke in the rally, saying, “The CCP's persecution of Falun Gong has been 17 years though the Party attempted to eliminate the practice within three months. But Falun Gong has spread to more countries across the world. Falun Gong brings benefits to the whole humankind.”

He talked about the investigation of the CCP's live organ harvesting by David Kilgour, former Secretary of Canadian State (Asian-Pacific), David Matas, human rights lawyer, and Ethan Gutmann, American reporter. He said, “Investigation of several hundred Chinese hospitals reached a conclusion that the number of organ transplants in China ranges from 60,000 to 100,000. CNN pointed out that a great deal of evidence indicates that hundred of thousands of Falun Gong practitioners and other prisoners of conscience are killed for organs by the CCP and its medical systems.”

In conclusion, he said, “We strongly demand the Chinese government to announce the reality of the organ transplantation in China, allow international organizations to conduct independent investigation, and stop the persecution of Falun Gong immediately!” 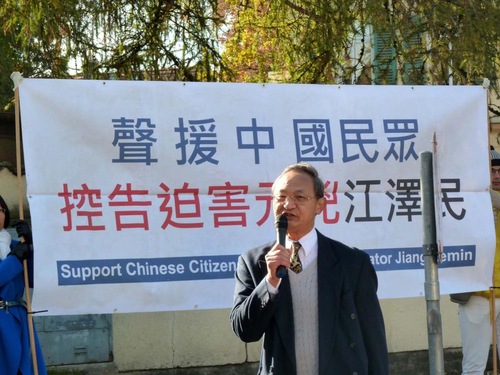 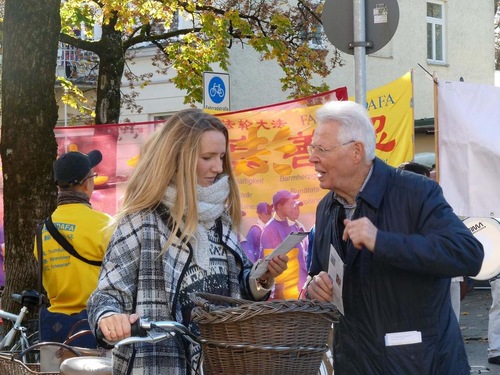 A passerby paused to accept a flyer from a Falun Gong practitioner.

Many passersby heard the performance by the Tian Guo Marching Band and stopped to learn more about the event. One man said, “The scene is enchanting and peaceful. I'd like to know more about Falun Gong.” 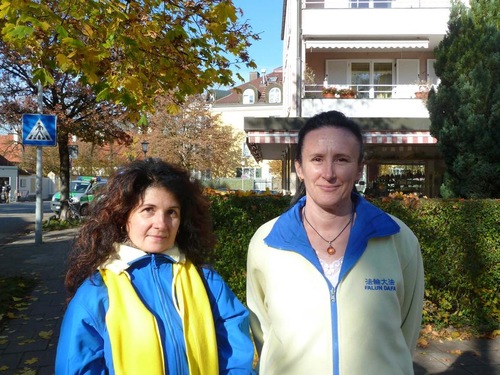 Practitioners from Other Countries Participate in the Event

Corina and Dana from Romania have lived in Italy for many years. Dana started practicing Falun Gong in 2001 and Corina in 2013. 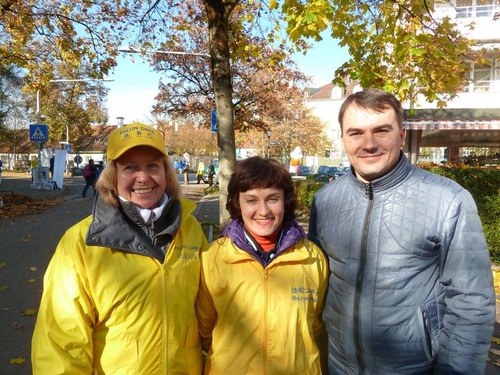 Left to right: Alexandra, Carolina, and Denis from Ukraine traveled more than 20 hours to Munich to participate in the event.

Three practitioners, Alexandra, Carolina, and Denis are from Ukraine. They traveled to Germany by bus for an entire day. Alexandra is 69 years old, but looks much younger. She said she has been healthy and energetic since she started practicing Falun Gong over ten years ago.

The event concluded at 2:00 p.m. Some practitioners stayed to demonstrate the Falun Gong exercises. Others went to Marienplatz in downtown Munich to raise awareness of the CCP's persecution.