(Minghui.org) Chloe, a young girl from a small town near London, UK, went to downtown London with her brother and grandparents on the afternoon of October 1. At Trafalgar Square, they came across Falun Gong practitioners raising awareness of the persecution of Falun Gong in China, despite the steady rain.

Chloe was drawn by the demonstration of the Falun Gong exercises. She followed along with the movements for the first exercise and learned them quite quickly. This was her first introduction to Falun Gong. 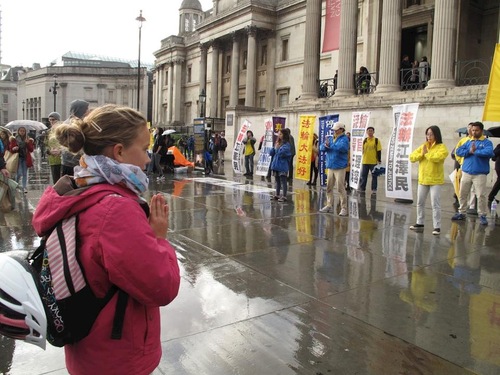 Chloe follows along to learn the first of the Falun Gong exercises.

Many passersby took notice of her as she learned the exercises with the practitioners. Large banners reading “Falun Dafa is good,” “The world needs Truthfulness-Compassion-Forbearance” and “Bring Jiang Zemin to justice” were also on prominent display.

After finishing the exercises Chloe said, “I feel relaxed, at peace, and I feel great!”

A practitioner handed her an origami lotus flower with a bookmark with the words “Falun Dafa is good” printed on it. The practitioner told her and her grandparents that they could learn more about Falun Gong (also known as Falun Dafa) online. 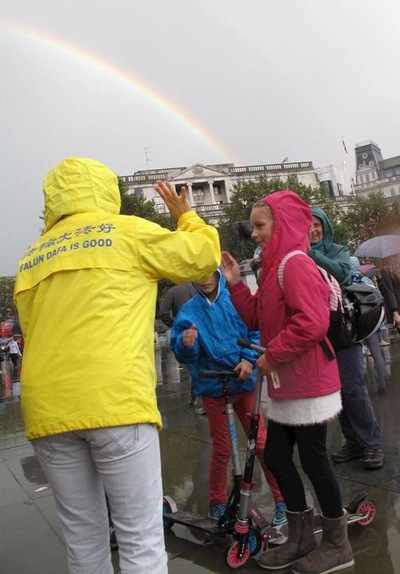 Falun Gong was made public in 1992 in China and soon became very popular due to its marvelous effect on health improvement and morality. Out of paranoid for losing control and jealousy, Jiang Zemin, as head of the Chinese Communist Party, overrode other Politburo standing committee members and launched the violent suppression of Falun Gong in 1999.

The persecution has led to the deaths of many Falun Gong practitioners in the past 17 years. More have been tortured for their belief and even killed for their organs in the state-sanctioned persecution. Jiang Zemin is directly responsible for the inception and continuation of the brutal persecution.

Falun Gong practitioners across the world conduct raise awareness of the ongoing persecution and call for help to end it as soon as possible.