A Whole New Level of Clarity

(Minghui.org) Lisa Rudek, originally from Poland, now lives in Illinois. She started practicing Falun Dafa in late 2014. What does Falun Dafa mean to her? “Clarity and wisdom.” 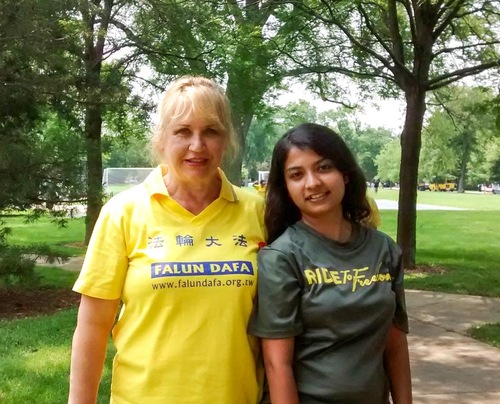 Lisa came across the practice in November 2014 when she was seeking another kind of clarity: her vision. She was blind in one eye and had glaucoma in the other. “I had to use eye drops daily for the rest of my life, and yet there is no cure for glaucoma. The drops just slowed down the rate that my vision deteriorated. The thought of going blind one day terrified me.”

To get a new pair of glasses, she walked into a vision center for an eye exam. Even though she knew there was no cure for her glaucoma, she asked the eye doctor if she knew of any other solution.

What the doctor said next led Lisa through a door of hope and a new world. She told Lisa that her mother also had glaucoma, but that by practicing Falun Dafa, her eyesight became fine. She now no longer needs any medication.

The doctor gave Lisa a copy of Zhuan Falun, the main book of Falun Dafa. “She told me that I could keep the book so long as I wanted to read it, and that I should treat the book with respect,” Lisa recalled.

“I felt energized by her information. It seemed as though I had awakened from a long slumber, and forgot all about my eye problems.”

Lisa’s daughter also affirmed the importance of the information. She exclaimed, “You have found Falun Dafa,” when she saw the book Zhuan Falun that same night. When her daughter lived in the New Jersey/New York area, she had once been given a Falun Dafa flyer. She took the book and started reading it. 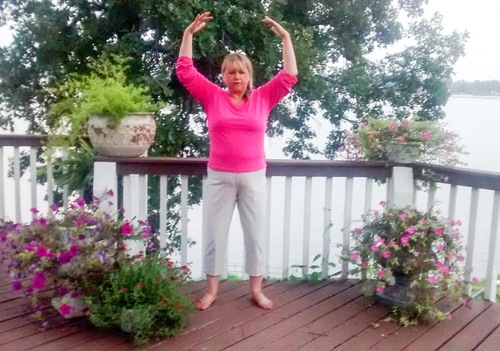 Lisa tried out the Falun Dafa exercises that weekend. She also ordered a Polish version of Zhuan Falun.

As she started reading the first paragraph of the first chapter, she realized the “power and importance” of Falun Dafa: “I couldn’t stop reading; I just wanted to read more. The content just drew me to it.”

Through the first paragraph, Lisa saw clarity, “The clarity of knowing the good from bad and the power to act according to it.” It brought fundamental changes to her and her life.

She was caring for her 87-year-old aunt, who passed away a few weeks ago. The woman suffered from dementia, so taking care of her was demanding. She needed constant monitoring and required diaper changes. She often cursed at, bit, pinched, and hit Lisa. Whenever this occurred, Lisa felt indignant and angered by the unjust treatment.

After taking up Falun Dafa, Lisa realized that she expected gratitude from her aunt, and considered the situation unfair when the expectation was not met. She learned that a practitioner should not talk back when cursed, and decided to let the principles of Falun Dafa guide her own behavior.

“With the change in my attitude toward my aunt, she, in turn, became less hostile toward me each and every day,” Lisa shared. “This was so amazing!”

She also experienced how the clarity and wisdom helped her help others. A friend hadn’t talked to his mother for about three years. When she heard about it, she told him that this was not right.

She explained to him that when he was angry at his mother, he was under the influence of unkind thoughts. She said if he could align his thoughts with kindness and act accordingly, he would experience a positive change.

The friend’s mother called Lisa the next day to tell her that her son had called her the night before and apologized for his behavior. Her son began to cry and told her he loved her again and again.

Lisa was very happy to hear that. “I know it’s the wisdom and power that Falun Dafa gave me. In the past, I would not have had the clarity of thought to analyze the situation for my friend. My words never carried so much power.

“I know that I have a lot of tests ahead of me, but I’m determined to overcome them, because I know the significance of Falun Dafa. I sometimes cry as I read Zhuan Falun, because I feel so lucky to embrace the Fa at the age of 59.

“The pressure in my eye with glaucoma is good and stable. I have Falun Dafa, and my struggle is over. For the first time in my adult life, I feel protected.”