(Minghui.org) Falun Gong practitioners in Northern Ireland held a parade in Belfast on August 22, 2015, calling for an end to the persecution in China. The parade started at City Hall, proceeded down major streets, and ended at Arthur Square. The parade received great attention from local residents, who showed their support of Falun Gong. 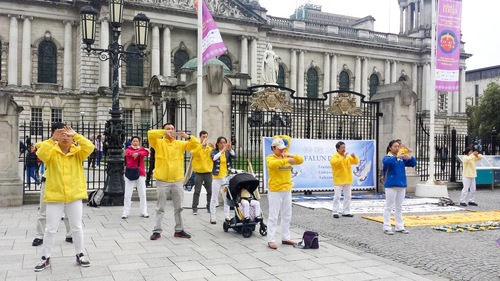 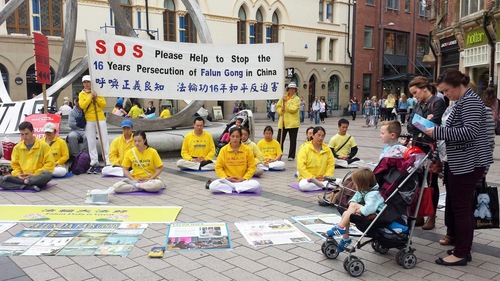 Parade spectators took Falun Gong introduction flyers to read. Many taxi and bus drivers also stopped to get flyers. Two tour bus employees talked to Falun Gong practitioners to learn details about the persecution, and organ harvesting from living Falun Gong practitioners in China. One of them said, “You should hold more parades like this. What you are doing is great! Keep up with it!”

Practitioners collected petition signatures at Arthur Square after the parade. A large banner stated, “SOS Please Help Stop the 16-Year Persecution of Falun Gong in China.” Many people stopped by to sign the petition. Some learned the Falun Gong exercises on the spot after they learned of the benefits of Falun Gong.