(Minghui.org) More than 160,000 Falun Gong practitioners from China and overseas have filed criminal complaints against Jiang Zemin, the former dictator of China, as of August 27, 2015, according to the Minghui website.

Over 70 practitioners in Vancouver British Columbia, a Canadian city with a large Chinese population, have filed lawsuits with the Supreme Court and Supreme Procuratorate of China, joining the global wave of bringing Jiang Zemin to justice. Twenty of them have received receipts for their mailings. 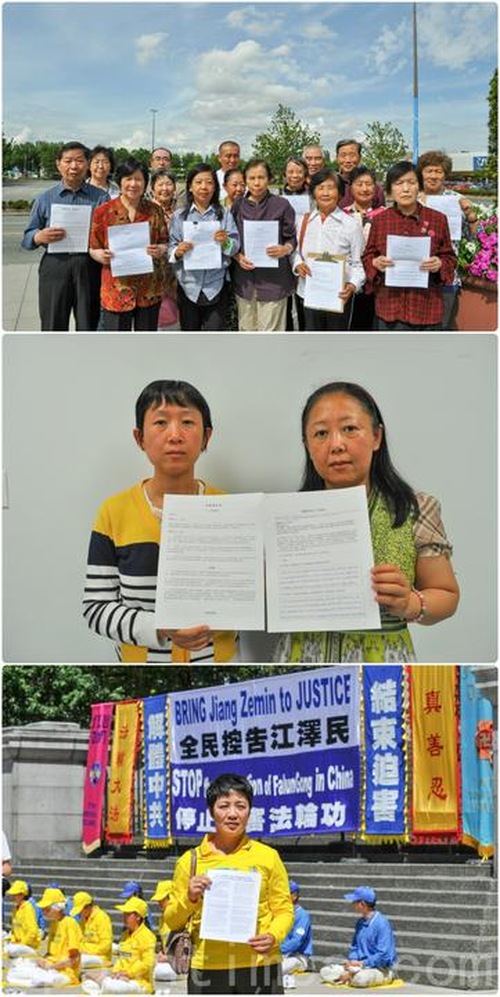 Over 70 Vancouver residents have filed criminal lawsuits against Jiang Zemin since May 2015.

The family of practitioner Jing Tian submitted criminal complaints against Jiang for the torture and other abuses they suffered in Liaoning Province since the persecution started in 1999.

Jing's family benefited tremendously from practicing Falun Dafa, which brought them better health, and taught them the principle of “Truthfulness-Compassion-Forbearance.” Before Jiang Zemin launched the persecution in 1999, her family was praised by the authorities for donating books to a local library.

She was released on medical parole after being force-fed and beaten in 2002. She was again arrested however, when she publicly revealed the abuses she suffered in prison, and her term was extended to 13 years.

Her sister, Jiang Cai, and brother, Jing Yu, were also imprisoned for 13 years and 10 years, respectively, also because they practiced Falun Gong.

Jing's mother, Chen Jun, was first detained for seven months in Fangjialan Detention Center, and later sent for three years of forced labor in Longshan Forced Labor Institute where she was severely tortured and nearly blinded due to unattended diabetes. She suffered more harassment and threats from local authorities until she died in fear.

Shenzhen Woman Stripped and Shocked on Eyes and Ears

Xie Qiong, a former clerk from Shenzhen Weishen Securities, sued Jiang Zemin for the tortures she endured in the persecution of Falun Gong.

Xie was detained and jailed six times since 2000 in the Guangzhou Detention Center, and Guangzhou City Baiyunshan Mental Hospital, where she was stripped bare, as humiliation, and repeatedly cursed and beaten by the guards.

The guards used electric batons to shock her eyes and ears, resulting in loss of hearing and eye-sight for a long time after she was released.

Electric Shocks and Locked to a Bed for 30 Days

Wang Junhua, a petite woman from Heilongjiang Province, had suffered 14 years of persecution before arriving in Canada.

Wang was arrested three times after 1999, and twice sent to forced labor camps. After being released, local authorities continued to harass her, and forced her to leave home and wander from one place for another nine years to avoid further persecution.

She was locked to a bed with iron chains for one month, roughly force-fed, and injected with unknown drugs. She could hardly walk after being released from the bed.

Lawsuits are for Justice, Not Revenge

“If it was not for obtaining justice for the Chinese people, I wouldn't want to relive the tortures and humiliation to file a criminal lawsuit against Jiang Zemin,” said Wang Junhua. “I think ordinary people probably would have died during those tortures and imprisonments.”

“Our Master told us to be unselfish, be considerate to others, and safeguard the Fa when it is attacked. We sued Jiang Zemin as a means to end the persecution, and to stop those who are still actively participating in the persecution of Falun Gong. We also want the Chinese people to see the evil deeds Jiang Zemin and his accomplices have done, and recognize the evil nature of the Chinese Communist Party, so they can choose a good future for themselves.”